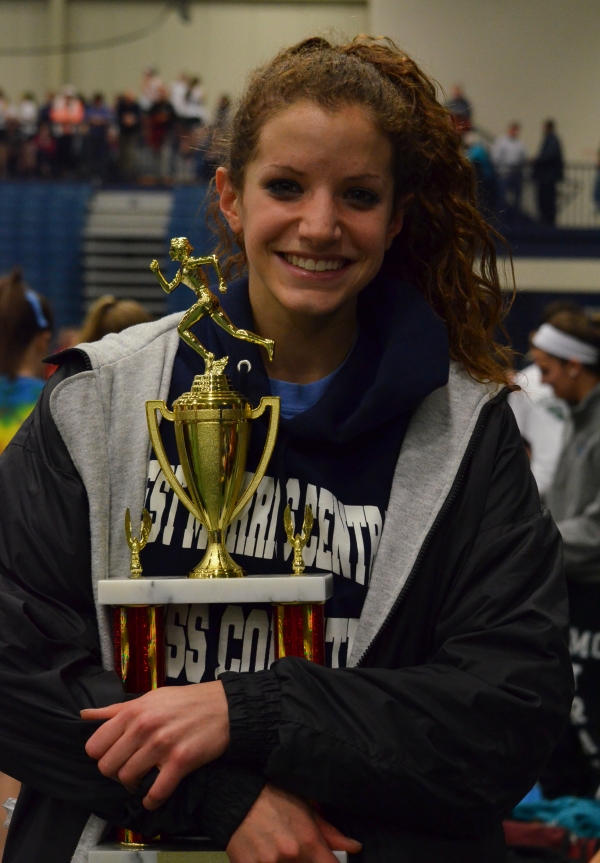 Photos by Maryann Harlow Kylene Cochrane of West Morris proudly displays the trophy she was awarded for winning the 600-meter race at the Jack O'Leary Lid Lifter. Morristown's Christine O'Kane and Emma Cary, pictured in the slideshow, were first and second, respectively, in the 1,600.
Rate this item
(0 votes)
Tweet

MADISON _ With many teams vying for the use of the gyms at Montville High School, practice time has been extremely limited.

That means that high jumpers like Leah Wis haven't been able to go through their routines.

Fortunately, Wis doesn't forget. Despite going nearly six months without doing the high jump, the Montville sophomore was ready when the indoor track season kicked off.

"I've been doing the high jump since third grade so it's like second nature to me," Wis said. "I just cleared my mind and did what I had to do. It's my first love so I never forget it."

Prior to the meet, Wis, who aspires to be a heptathlete, said she "put down some steps." That was enough for first place, even though her jump was three inches off her PR of 5 feet, 5 inches established last spring.

"I feel good about winning since I haven't been able to practice," Wis said. "I'm very excited. It's a good confidence builder."

Wis also turned in a strong showing in the shot put, taking fourth with a throw of 33-2. She was encouraged by that, too, because she hopes to compete as a heptathlete some day, perhaps at the Olympics. The heptathlon consists of seven events - high jump, 100-meter hurdles, shot put, long jump, 200 meters, 800 meters and javelin.

"I'm getting stronger. I've been in the weight room," Wis said. "My dream since the age of 5 has been to go to the Olympics. Shot put is my worst event so I'll take it. I'm ecstatic."

West Morris' Kylene Cochrane took the gold in the 600-meter run, crossing the finish line in 1:41.07, a school record. It was her first time running in the event.

Her victory came after only three days of training. Cochrane, who will attend the University of Pennsylvania next fall, took several weeks off at the end of the cross country season. She took to the roads in her neighborhood on Sunday and ran at practice on Monday and Wednesday.

"This is my senior year. Why not try new things?" said Cochrane, most accustomed to running the 1,600 and the mile. "It was cool getting the school record."

Adding to Cochrane's big night was the trophy she was awarded for winning the featured event. She said she'll cherish the trophy, the second of her career, and planned to put her new hardware on her desk.

When she began the 600 meters, she had no idea what to expect. Cochrane was boxed in for the first 300 meters before finding an opening and breaking out.

"I didn't stress," she said. "I just tried to get around. I saw an opportunity and wanted to finish it up. I had to relax and feel the race. I went when I had enough left in my tank to pull ahead."

Christine O'Kane of Morristown will long remember her performance in the 1,600. O'Kane, a junior, clocked a time of 5:29.48 and was atop the field for the initial time in her career. Her teammate, Emma Cary, was second in 5:32.27.

"I'm really excited about this," O'Kane said. "It feels good. I went out and ran with my teammates who are great training partners. I didn't have a good time today. This is only the beginning."

Last winter, O'Kane was the Morris County champion in the 800-meter race for sophomores.

Orji recently committed to the University of Georgia, where she likely will study criminal justice.

"I'm glad I know where I am going," Orji said. "Now I don't have to think about it anymore."