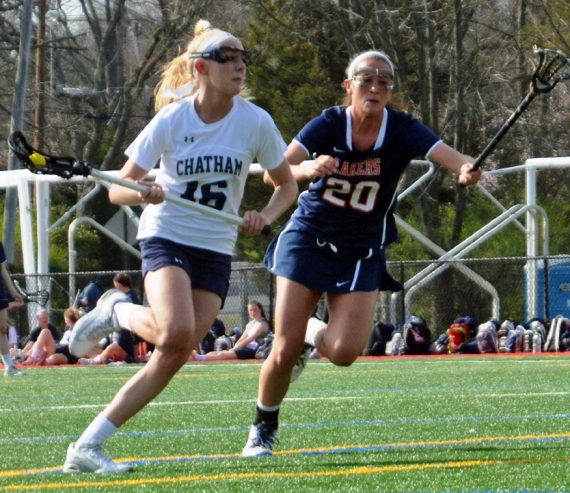 Photos by Mark Kitchin Faith Reilly's goal with 17.3 seconds left snapped an 8-8 deadlock in a game against Chatham.
Rate this item
(0 votes)
Tweet

CHATHAM _ Mountain Lakes may not always be comfortable playing in close games but, as long as the result is a victory, the Lakers are not complaining.

Sophomore Faith Reilly scored off a shot from her knees with 17.3 seconds remaining to lift Mountain Lakes to a 9-8 win over Chatham on Friday, April 1.

Sarah Bedard scored three goals and Grainger Rosati had two goals for the Lakers, now 2-0. It was the season and home opener for Chatham. Zoe Kraus led the Cougars with a hat trick.

It was the second narrow win in a row for the Lakers. On Wednesday, March 30, they defeated Sacred Heart Academy of Long Island, 7-6, in overtime. The victory against the rival Cougars, last year's MCT finalists, was just as dramatic.

Chatham either led the game or was tied until the final seconds when Reilly took a crease feed from Rosati, fell down and, when everyone seemed to hesitate, she bounced to her right to get off a shot while on her knees. Her low effort surprised everyone, including some who might have been expecting a whistle, and the ball hit the back of the net.

"I kind of drove," Reilly said. "Once I was on the ground, I just thought I would put it in and hope for the best. I was looking around. I was hoping that if it didn't go in I would have gotten (a call) but it went in."

It was the first game-winning goal for the Mountain Lakes athlete whose presence may give them more offensive diversity.

"Faith is doing really well this year," Rosati said. "She is stepping up as a sophomore because we need more people scoring and she is doing a job."

This year's start was in sharp contrast to last year when the team began the season 0-6 and opened with a one-goal loss to Chatham.

"This group of kids doesn't want to stop playing. They play until the final whistle," Mountain Lakes coach Jen Topakas said. "They learned a lot from last year. The senior class came in ready to lead. I think that was important. They know what they want. They have experienced winning seasons and seasons that were kind of a struggle. They have it on their agenda that they want to be successful."

The coach praised the Lakers' defensive effort. Cougars' players like Bridget Ballard, Abby Morgan and Kraus are capable of filling up the nets.

"I feel like on the defensive end, we created some turnovers and those turnovers led to our offense," coach Topakas said. "Jane Brennan, Emily Krupnick, Anya Chopoorian, Kimmy Jenkins and Emma Fernandez... There are a lot of kids who have played some minutes and they are leading the younger kids. That's all you can ask."

Chatham got off to an early advantage with a pair of Kraus goals and led 3-1 at the five-minute mark of the first half. However, the Cougars never could build more than a two-goal margin. Chatham led 4-3 at the half but Mountain Lakes kept battling.

"We play until the end," Rosati said. "This year, we are really pushing each other because we know our potential. Everyone pushes each other at practice and we give each other plenty of support."

The second half was a back-and-forth affair. There were five ties in all. Emily Wingate's goal, which made it 8-7 with 5:29 remaining, looked like it might give Chatham the lead for good, especially after the Cougars won the draw. However, Rosati intercepted a pass to give possession back to the Lakers. The result was Jill Boehmcke's goal off a pass from Bedard that made it 8-8 with 4:37 left.

The Lakers had most of the possession after the draw. With 38.8 seconds left, Bedard had a free position opportunity but was forced to pull out. Rosati was on the left wing when she found Reilly on the crease. When Reilly scored her improbable goal, she was mobbed by her teammates.

"Our teamwork is really strong," Reilly said. "Everyone works together well and we all try to be a threat on offense."

There was still time left for Chatham to get one last shot in but the wild scramble on the draw was won by Reilly, who ran to the Cougars' offensive end as time was running out.

"This victory means a lot," Reilly said. "They are one of our biggest competitors. It's awesome to get a 'W.'"