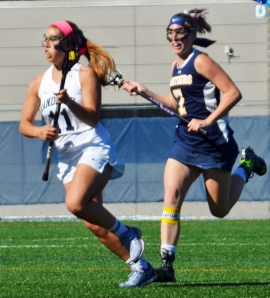 Photos by Mark Kitchin Randolph moved to .500 with its win over Pequannock, just in time for the MCT seeding.
Rate this item
(0 votes)
Tweet

RANDOLPH _ Flashes of inconsistency are hallmarks of young teams.

Randolph has a sophomore-laden squad but the experience they are gaining may help them turn the corner on their season very soon.

It looked that way in a 10-8 upset win over Pequannock on Wednesday, April 20.

Taralyn (TT) Naslonski had two goals and three assists and Roman Hladky had two goals and an assist in Randolph's triumph. Twin sisters Brynn and Jillian Fantuzzi had two goals each and Natalie Panvini also notched a pair for the Rams. Junior goalkeeper Sutton Todd had an outstanding game with 11 saves. The win moves the Rams to 3-3 on the season.

Randolph scored four of the first five goals and took a 5-2 advantage going into halftime. Pequannock rallied late when a pair of yellow cards left the Rams a player short over the last four minutes.

The game was huge confidence builder for the Rams. The victory may have vastly improved their rankings for the Morris County Tournament, which is holding its seeding meeting on Thursday, April 21.

"We took a hard loss on Monday (12-9 to Jefferson)," Jilian Fantuzzi said. "We had a team lunch and we really talked about our chemistry. We had good transitions today. We worked the ball to the goal and really felt like a team. It was all teamwork today."

A good start was imperative. The Rams took advantage of the Golden Panthers, who may have been a step slow since defeating Montville 12-6 on Tuesday. Naslonsky and Hladky scored two goals apiece to help Randolph build a 5-1 edge with 16 minutes left in the first half.

While the Rams were able to fill the nets, their defense was determined to slow down the Golden Panthers and Kassaleh, the top scorer in the history of the program.

"We were really aggressive on her," Todd said. "Our defense slid, our help was there. We didn't faceguard her but we knew if she had the ball, she would go and drive. We were quick to slide and I tried to call the slides a little bit earlier so people would have time to get there.''

Todd is proud of her defense (Melissa Downes, Sydney Jenkins, Sarah Leneghan and Mackenzie Sheehan) which has three sophomores and one senior and seems to be beginning to jell.

"We are like a little family. After every goal, we get together and pick each other up," Todd said. "Sarah (Leneghan) is someone who picks up the ball and makes great clears and Sydney (Jenkins) is one of the fastest girls on our team.

I see them mixing and that's why I think this is definitely going to be a turning point in our season."

The Rams kept the momentum going in the second half. Jillian Fantuzzi became the offensive catalyst. Thirty-one seconds into the second half, she connected off a feed from Aly Styles to make it a four-goal game. Less than five minutes later, she scored again, this time on a pass from Naslonski.

"The intensity got me up," Jillian Fantuzzi said. "I was on the draw and, when I'm on the draw, I get really involved and aggressive. I felt like I needed to go and get it more."

The Rams had leads of 9-4 and 10-5 before the Golden Panthers rallied late on goals from Jess Carbone (4:20), Kassaleh (2:46) and Jeana Goodwin (:17). The Randolph players had to remember the clock was their friend and had to be judicious in the decisions they made. As a result they earned a victory to grow on.