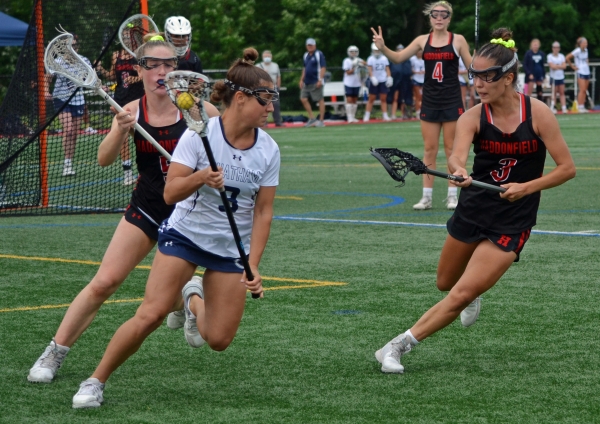 Photos by Sandy Seegers Chatham dominated in the second half and distanced itself from Haddonfield.
Rate this item
(6 votes)
Tweet

McCutcheon Oliver's absence left Chatham in the capable hands of Kelsey Ryan and other assistans but very little has changed. The fourth-seeded Cougars, up by only one goal at halftime, continued to roll, defeating Haddonfield 15-5 in a Tournament of Champions quarterfinal three days after securing their much-desired state title.

"This is huge," said Chatham junior attack Stella Straka, who had two goals and an assist. "It was a great team win. We all showed up and wanted it. This is our season, our revenge tour. We have more unfinished business and we're chipping away game by game."

Ashley Kiernan posted a hat trick and had a pair of assists for the Cougars, who will clash with Summit in a TOC semifinal on Thursday, June 9. Kiernan, guarded closely and effectively in the opening half, had all three of her goals after the break. Jane Middleton and Allison Barrett contributed two scores to Chatham's 18th win.

Barrett, a midfielder, was responsbile for the goal that snapped a 4-4 deadlock. Once the Cougars pulled ahead, they didn't stop. There seemed to be more energy and motivation in the second half as Chatham tallied six unanswered goals. Breaking through against Haddonfield goalie Lexi Gwaku, formidable in the opening half, to complete the six-goal burst were Carly Frohnapfel, Kiernan, Straka, Middleton and Sophia Claps.

"Everything finally started to flow which was great," Ryan said. "And multiple players scored. It wasn't just one. We began attacking very well. It was a full-team effort."

"Our offense was rocky at the beginning," Straka said. "The more we play together, the better we are. We worked as a unit. We were feeding each other when we were open."

Straka was pleased with the goal that put Chatham up 8-4, noting that she called out to Kiernan, who gained possession off the draw and sprinted into Haddonfield territory.

"I looked at Ashley and said 'Hit Claps,'" recalled Straka, whose right shoulder was wrapped in ice because she dove to keep the ball in play. "I stepped up, went around the goalie and got my stick free. Claps passed to me and I got the goal."

The Cougars continued to be relentless. In a five-minute span, beginning with 6:08 remainiing, the Cougars fired in five goals to ensure they'd move on. Straka had the initial one, Kiernan converted twice and Chloe Tsetsekas and Frankie Franz had a goal apiece.

"All of us caused turnovers on defense," Straka said. "That shows what a threat we are."

Ryan, who was a soccer and lacrosse player as well as a swimmer while at Roxbury High School before going on to compete in lacrosse at Fairleigh Dickinson, said there is additional stress that comes from being interim head coach while McCutcheon Oliver is on maternity leave.

"It's a lot but it's less stressful with the amazing support of the girls on the team and the rest of the coaching staff," she said. "Helen's been helpful, too. We frequently talk and go over game plans and lineups. It's definitely exciting being a part of this program."