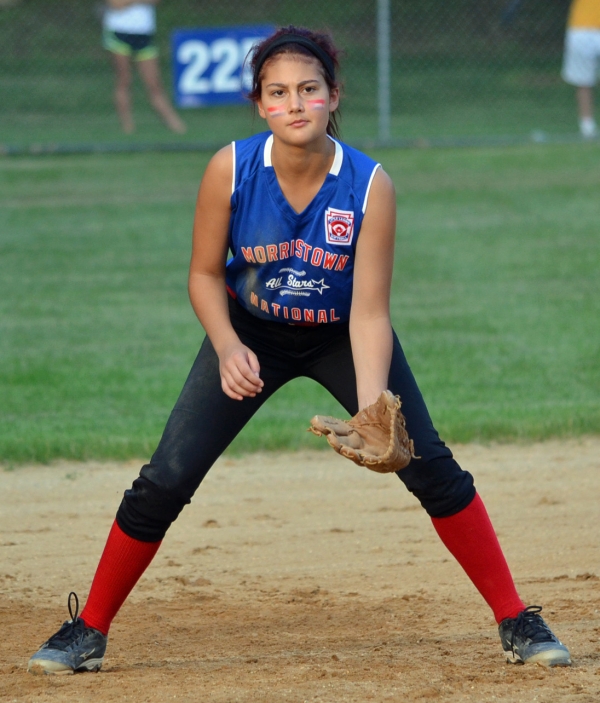 RINGWOOD _ Steady rain did not prevent the Junior Little League Section 1 game between Morristown National and Ridgewood from getting underway.

Both teams, no doubt, hoped for ideal conditions. Morristown National, first to bat, discovered a way to avoid having its ace, Molly Murphy, pitch during the storm - send as many batters as possible to the plate.

Morristown National tallied seven runs in the top of the first inning en route to a 10-3 win in its section opener on Tuesday, July 7 at Stonetown Field.

From there, Murphy took over, putting in a commanding performance. The rain was close to ending when Murphy, who pitched a complete-game six-hitter, striking out 12, began to toe the rubber.

"I felt pretty confident before the game," Murphy said. "It rained while we were warming up and then while we were hitting and I was stressed. I didn't want to pitch in the rain. The Ridgewood pitcher struggled and walked some batters because the ball was so wet."

With the victory, Morristown National earned the right to face host Ringwood in the double-elimination tournament. That game is set for Thursday, July 9 at 5:30 p.m.

Murphy certainly had a grip on the ball and the game. She struck out the side in order in the first and third innings.

Of course, it was a major plus that Murphy had a significant lead to work with. The pressure was off.

"It was good we were ahead," Murphy said. "If we made a mistake, we'd just get over it. Because we had seven runs, it wasn't make-or-break time."

Manager Bob Costello was pleased his players wouldn't have to battle adverse conditions.

"I was glad we weren't in the field in the rain," Costello said. "I wanted to get the game in. That was a great first inning. It's been a fun season. The girls are playing well."

Izzy Del Monte delivered the biggest hit in the first inning, a two-run single. Olivia Benvenuti knocked in a run with a base hit. Morristown National benefited from multiple walks, a hit batsman and fielder's choices.

Del Monte, an outfielder, was relieved that her teammates didn't have to contend with subpar conditions when in the field. The No. 7 batter, Del Monte waited for her turn in the batter's box. She felt good about her contribution.

"I saw all my friends get up and I figured I'd get to bat, too," said Del Monte, who will attend Villa Walsh in the fall. "We got a lot of people on base in that inning. The Ridgewood pitcher had some trouble with the ball being slippery. That inning was good for us. We needed to get ahead."

Morristown National put across its last three runs in the sixth inning. Murphy and Shannon Costello drove in runs with singles. Jackie Rhoades had a pair of hits to aid the attack.

More in this category: « Leitner, Quigley back on track PTE 12s come out swinging »