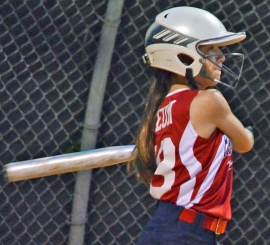 Photos by Sandy Seegers, Maryann Harlow Sophia Leon, pictured above, doubled in two runs for Par-Troy East in the bottom of the fourth inning against Pequannock. Jenna Devens, shown in the slideshow, gave up only one hit.
Rate this item
(0 votes)
Tweet

POMPTON LAKES _ Accustomed to early leads, the Par-Troy East Little League 12s did not panic when the scoreboard showed zeroes for three and a half innings.

PTE simply got busy, scoring all of its runs in the fourth and fifth innings to register a 5-0 shutout of Pequannock in a winners' bracket game at the Section 1 Tournament on Wednesday, July 8.

"It took awhile to get the bats going," PTE manager Bob Devens said. "Pequannock is a good team with a good pitcher. We finally began to make good contact. We ran the bases well and got strong defense and pitching."

On Friday, July 10, PTE likely will clash with Pequannock once again at Joe Grill Field at 7 p.m. This time, the Section 1 championship and a berth in the state tournament are at stake. Pequannock will meet Somerset Hills in a losers' bracket game on July 9.

Devens' daughter, Jenna, notched the pitching win with a one-hitter that featured 12 strikeouts. Pequannock's No. 9 batter, Rebecca Zahner, singled off Devens with two outs in the top of the third inning.

In the bottom of the fourth, PTE, which has allowed only three runs in eight district and section games, broke through against Pequannock pitcher Brielle Toone. Gabriella Gennarelli singled with one out. A double by Rachel Volarich ensued. Gennarelli scored on Lindsey DePetris' fielder's choice and PTE assumed a 1-0 lead. Sophia Leon (2 for 3) had a two-run double for 3-0.

An inning later, PTE put across two more runs. Gennarelli, the catcher, had another big hit, a two-run double, driving in Lil Vidal and Talie Braga, who also had a two-base hit.

Jenna Devens, who throws five pitches, appreciated the support. The 11-year-old Devens, one of three solid PTE pitchers, was able to exhale once the runs were penciled into the official scorebook.

"I knew Pequannock was pretty good and that made me nervous," she said. "I had to be confident. I kept saying 'I can do this.'"

Bob Devens felt that "Jenna was really on. She had a warmup lesson and was tweaked to where she should be."

"My arm was going out a little bit," Jenna Devens said.

Leon, a switch hitter, continues to thrive in the leadoff spot. Her speed makes her dangerous on the basepaths. She was surprised by her double to left field.

"I wasn't hitting well in the middle of the season," Leon noted. "I just ran really fast when I saw the ball go through and I got there in time."

Leon, a piano player and member of a soccer travel team, attributes her speed to her involvement in sports. Leon is looking forward to playing for the title on Friday night.

"I feel like we can win," said Leon, soon to enter eighth grade at Central Middle School. "We already beat Pequannock. I think we can do it again."