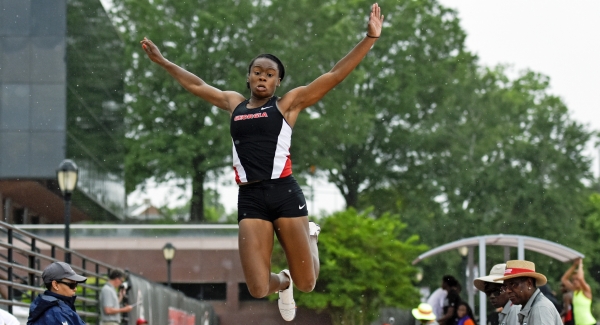 MOUNT OLIVE _ When Keturah Orji was two weeks old, she was pushing herself up - quite forcefully - on her mother's lap.

Two days shy of seven months, Orji was walking. Stairs were next and the desire to go higher.

"Keturah's legs have always been strong," said her mother, Nicole. "She had balance and coordination very early."

It comes as no suprise, considering her rapid development during infancy, that Orji, a Mount Olive High School graduate, continued to amaze and persevere, both academically and athletically. Her determination and a desire to develop her talents to the utmost turned her into a world class athlete who will compete in the triple jump at the 2016 Summer Olympics in Rio de Janeiro.

"It's definitely exciting," the 20-year-old Orji said. "I'm happy about my performance at the trials. I guess it's a little hard to believe. I think I'll be really excited when I get there."

Orji, who joined the realm of track and field as a high school freshman, has dominated in the triple jump on every level, most recently at the University of Georgia. She is a three-time NCAA champion in her event and set the American record with a jump of 47 feet, 8 inches in the spring. At the Olympic Trials last month, Orji was first with a 46-11 3/4.

The runner-up was Morristown's Christina Epps, who hit the sand with a distance of 46-6. Third place went to Andrea Geubelle (46-5 1/4), giving the United States its first full women's triple jump contingent in 20 years. Jumpers had to meet or surpass the Olympic qualifying mark of 46-5 1/4.

Each day at the trials, Orji and Epps pushed one another.

"I think Christina is great," said Orji, who broke the scholastic records set by Epps, five years her senior. "I met her a few years ago at the USAs. We encourage and support each other. I cheered for her and she did the same for me. It's great that we're from Morris County. There are many New Jersey Olympians. It's nice to be a part of it."

Paying close attention to the trials was Orji's childhood friend, Suzie Nimoh, a student at American University and a former track teammate at Mount Olive. Nimoh convinced Orji, seeking a new sport after giving up gymnastics which she had done since second grade, to join the track team when they were freshmen.

"Keturah was trying to figure out what sports to do," Nimoh said. "Weeks before winter track began, she kept asking me 'When do we practice? What do I need to know?' I said 'Whoa! Hold on, girl.' Keturah always was very dedicated. She didn't need much encouragement or motivation, like other kids. She encouraged everyone to be there, practice and improve. Keturah was a leader and set examples for others right from the start."

The close friends are in touch every day, whether talking or texting. As children, Orji, whose name is biblical to honor her great grandmother on her mother's side, and Nimoh attended Word of Life Church in Dover and bonded over "juggling two cultures." Nimoh's parents hail from Ghana while Orji's father, Anthony, is Nigerian.

Nimoh noted that their friendship isn't just about track. Orji, whose major is financial planning, is an excellent listener and problem solver.

"Every time I talk to Keturah, she's helping someone," Nimoh said. "She puts people first. Keturah makes time for me and has a lot of patience. What I like is that she's honest. I value her advice. She's direct. Keturah is a person of strong faith. She feels that God gave her talents and that she should develop them and succeed for Him. She doesn't want to waste her gifts."

Those "gifts" were abundant. From birth, Orji was exuberant and energetic. At the age of 8, she began gymnastics and was exceptional all around, especially in vault and floor exercise. The balance beam and bars became more difficult as Orji got taller. The family had a trampoline in the backyard and Orji would be on it, flipping and jumping.

According to Nicole Orji, Keturah, the third of four children, takes academics seriously. In first and second grade, Orji, when assigned a project, would find a calendar and begin planning.

"Keturah never waited until the last minute," Nicole Orji said. "If something was due in a month, she figured out what she had to do to get it done and, most times, she was finished in three weeks."

Winning, albeit in a good way, was important to Orji. As a child, she'd initiate a race for just about anything - being first to drink a soda or fasten a seatbelt.

"At the time, Dave Sulley was doing indoor track and I remember him telling me 'Wait until you see Keturah,'" said Vanessa Benfatti, Orji's high school coach. "All we did was tell her what to do and put her out there. I orginally said Keturah would do only sprints and long jump because I didn't want her to get hurt. She was good at everything.

"Everything Keturah touched turned to gold. She did anything she was asked to do. She never told us she didn't have enough energy. Keturah sacrificed herself."

During Orji's sophomore year, she and the Marauders were headed to Montville for a dual meet. Orji, slated to do sprints and the long jump, approached Benfatti on the bus and asked to forego the 400 and try the triple jump. Benfatti warned her that it was complicated and she didn't want her to get injured. Orji was likely to prevail in the 400 but insisted, telling her coach she could still garner the six points.

"It turned out Keturah won the triple jump that day," Benfatti recalled. "She jumped 39 feet, a little short of the county record. I'm rarely proven wrong and I was in that instance. I listened to the athlete and told her it was OK. If that hadn't happened, where would she be today? From that day on, Keturah was a triple jumper and really proud of it."

Her gymnastics background helped with the triple jump. Orji, able to maintain control of her body and possessing balance and power, went on to smash Epps' record. Before leaving Mount Olive, she captured Meet of Champions crowns in long jump and high jump three years in a row.

"Gymnastics helped me a lot," Orji said. "You need discipline. It's one of the hardest sports. If you do well at gymnastics, you can do well at anything."

Prior to leaving for Brazil, Orji has been training six days per week and taking classes online. At Georgia, she is working out under head coach Petros Kyprianou.

Her technique has changed since high school. Orji is now a single-arm jumper, using a European technique in which one arm is in front and one in back. She also lands butt first in the pit. Previously, Orji employed a double-arm method, swinging both arms and sprinting down the runway.

"The single arm aids my timing," Orji explained. "I have to be more patient. There's no more sprinting. I pick up speed over the last four steps. I used to stand up when I landed. My butt hits first now."

While in Rio, Orji will continue to prepare. She hopes to meet other athletes, including Serena Williams and the U.S. gymnasts. If she has a chance, she'd like to watch gymnastics. Orji will be shocked if someone seeks her out.

"Keturah is humble. She'll never go into a room and say 'I'm Keturah Orji,'" Benfatti said. "She sits back, watches and listens. She doesn't seek attention."

"What sets Keturah apart is her humility," she said. "She broke the American record and told me 'I broke a PR. I'm improving.' No mention of what she really did. She's more worried about herself personally. She just wants to go farther every time."

Although 5-foot-5, she loved volleyball, which she played for three years at Mount Olive. Her top-notch leaping ability enabled her to start at outside hitter abt, s a junior and senior.

"She was, without a doubt, the most competitive athlete I ever coached," Marauders volleyball coach Lee Clowers said.

Each of the Orji children is accomplished. Anthony Jr. is a Julliard graduate and a musician in New York. Linda, a member of the basketball team at Mount Olive for a season and a half after the family moved from Jersey City, is writing a book. Rachel, according to her mom, is "artsy."

Benfatti, along with everyone the entire Mount Olive community, is proud and thrilled. Orji is sure to inspire future triple jumpers, some with their eyes on the Olympics.

"Not a day went by when Keturah didn't ask herself or others 'How can I do this better?'" Benfatti said. "She's just amazing. She has things in her mind and goes out and achieves them. Keturah will be out for a personal best in Rio. It'll be interesting to see how she does."

View the embedded image gallery online at:
https://soar-nj.com/sports/outdoor-track/item/1309-mount-olive-s-orji-ready-for-rio#sigProId36a5da9041
More in this category: « Seniors exceptional for Wildcats Epps returns to Morristown »