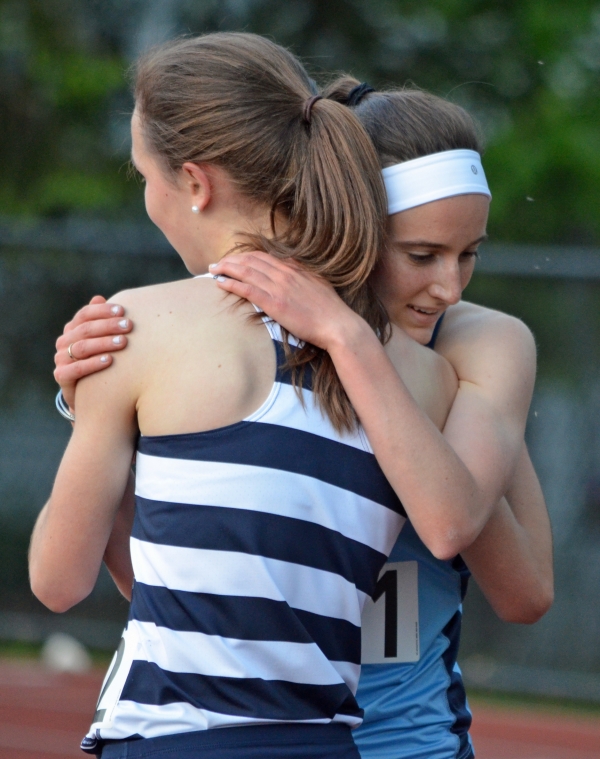 Photos by Sandy Seegers Abby Loveys of Randolph and Julia Trethaway of West Morris embrace after a tight race in the 3,200 meters at the Morris County Track Championships.
Rate this item
(1 Vote)
Tweet

BOONTON _ For the entire 3,200 at the Morris County Track Championship, Julia Trethaway was right behind Randolph's Abby Loveys.

Trethaway, of West Morris, pushed Loveys, staying right with her. She didn't let her pull away.

At the conclusion of the race, which ended with a state-record-time of 10:10.24 for Loveys, Trethaway remained close, hugging the Rams star over and over again. Trethaway and Loveys did a did a double high five then clasped hands after crossing the finish line. They embraced, stepped back before hugging again.

In Loveys opinion, the accomplishment, which broke a record set by Washington Township's Michelle Rowen in 1983, was shared. The record, she insisted, belonged to both of them.

"I knew I could get the record but I didn't do it on my own," Loveys said. "The best accomplishments happen with other people. I'm grateful for the opportunity. The conditions were perfect."

Loveys indicated that the post-race celebration was "a special moment."

"I couldn't have done it if Julia wasn't on my back," said Loveys, bound for Princeton, where she intends to be a pre-med major. "When I crossed the line, my face lit up. I knew I got it. I've been dreaming about this for a long time."

Randolph, ahead by just two points after the first day of the meet, had 110.5 points followed by West Morris with 75. Morris Catholic came in third with 41 points. It was an exceptional meet for Loveys and the Rams, who secured their third county title in a row. On the first day, Loveys became a four-time winner in the 1,600 and set a county record (4:50.12) in the process.

Also coming up big at Boonton High School on May 14 and 15 was Lovey's teammate, Meghan O'Malley, winner of gold medals in the 100-meter hurdles and in three jumps - high, long and triple. Karen Hull, a junior, boosted the Rams, too, by claiming gold in the 100 meters.

"It's nice to win as a senior," Loveys said of the team championship. "This is really great. I've been running with these girls since I started. They're my sisters at this point."

West Morris' Caroline Isemann topped the field in the 400-meter hurdles (1:03.78) and was part of the winning 4x400 team. Isemann was a field hockey player from sixth grade until sophomore year but then switched to track. She's certain she made the right decision.

"It was hard choosing. I struggled with it," Isemann said. "I knew that if I put in the work in track, it would pay off."

Her father, John, a hurdler at Rutgers, assisted her in transitioning to cross country and track. The duo spent nearly every day at the track, no matter what the weather.

"My dad told me that hard work beats talent," Isemann said. "We'd go to the track early every morning, in the rain and in the cold. It was to get ready for this. It was raining on the way here and I thought 'This is what I planned for. I'm ready to go.' I don't worry about the conditions."

Isemann said she was confident coming into the meet because she triumphed in the 400 hurdles at the sectional meet last winter. During cross country, she struggled with a back injury and only participated in four or five races.

"I went through a lot to get here so I feel like I really deserve it," she said.