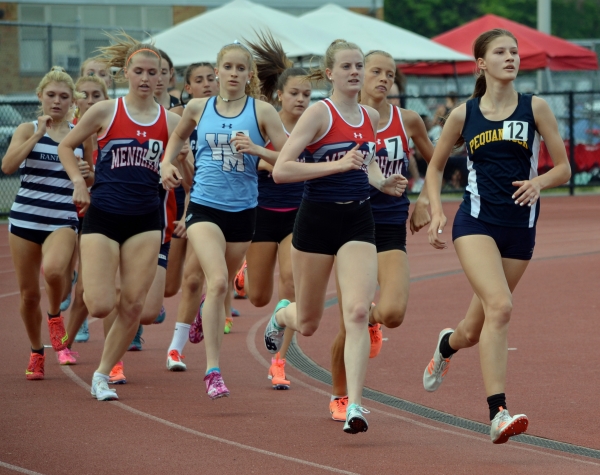 BOONTON _ Second in the shot put after a rocky start, which included a foul, Mendham's Melissa Aymil retained a positive outlook and went all out in the finals.

The foul, Aymil said, shook her up but she knew she had nothing to lose.

Aymil, a junior, regrouped prior to the finals and, on her first attempt, heaved the shot the winning distance - 41 feet, 6 inches - to help the Minutemen garner their first Morris County Track and Field championship on Wednesday, May 26 at Boonton High School.

"Going into the county championships I knew that not only the team but myself could have a high chance of winning," Aymil said. "So many people had faith in us and knew that we can win but now it was our turn to prove ourselves. I have been training for these big meets for the whole season and I knew that it wasn't for nothing."

The lofty efforts by Aymil weren't achieved alone. Aymil indicated that she "couldn't have done it without my coaches and teammates."

Mendham, long a force in cross country and track, trailed Chatham by three points with two events remaining. Megan Smith and Madison Orlins were stellar in the 3,200, finishing third and fourth, respectively, to give Mendham 10 more points and close the gap to three.

The Minutemen closed out the meet by prevailing in the 4x400 relay. The squad that garnered the gold was comprised of Lucie Antonius, Julianna Marran, Samantha Schuetz and Ava Curry. Curry was commended by coach Roy Hamblen for running the fastest leg of the relay as anchor.

Marran, despite learning the 400 hurdles this spring, was second in that event, providing another big boost. In addition to the 4x400, Curry was fourth in the 800 and 1,600.

Mount Olive had a double winner in Sophia Redmond (100 and 400 meters). Redmond made sure she held back in the preliminaries and semifinals in order to preserve her energy for the finals.

"When finals came around, I was under a lot of pressure because I knew I had to PR to place," Redmond said. "I race with the goal of doing my best but medals are always nice. My arms were shaking on the starting line but I had an amazing start and was able to keep the lead and run a PR of 12.59."

For the 400, her fourth event of the day, Redmond's goal was to clock in at 58 seconds.

"My legs were feeling it," she said. "I was milliseconds off from achieving my goal and ran my official PR with a 59.08."

Sarah Hanifin, a Villa Walsh senior, was pleased to take first in the 3,200, especially because she sat out the cross country season with an injury.

"A win at counties was definitely exciting but also bittersweet," said Hanifin, bound for Boston University, where she will major in engineering. "Counties has always been one of my favorite meets so I was sad it was my last one."

Hanifin simply was glad to compete since she was sidelined last fall.

"It was tough to not compete, especially because cross country is my favorite season," Hanifin said. "I was glad I got to be there to support my teammates and am super proud of all of them and their accomplishments."

Hamblen felt that Mendham "showed courage and character" in coming out atop the field.

"Many were doing events that were new to them and we missed last spring season when it was canceled due to COVID," he said. "This has long been a goal for the program and we have won county championships in every other season (cross country, winter track, Morris County Relays) but never in the spring."