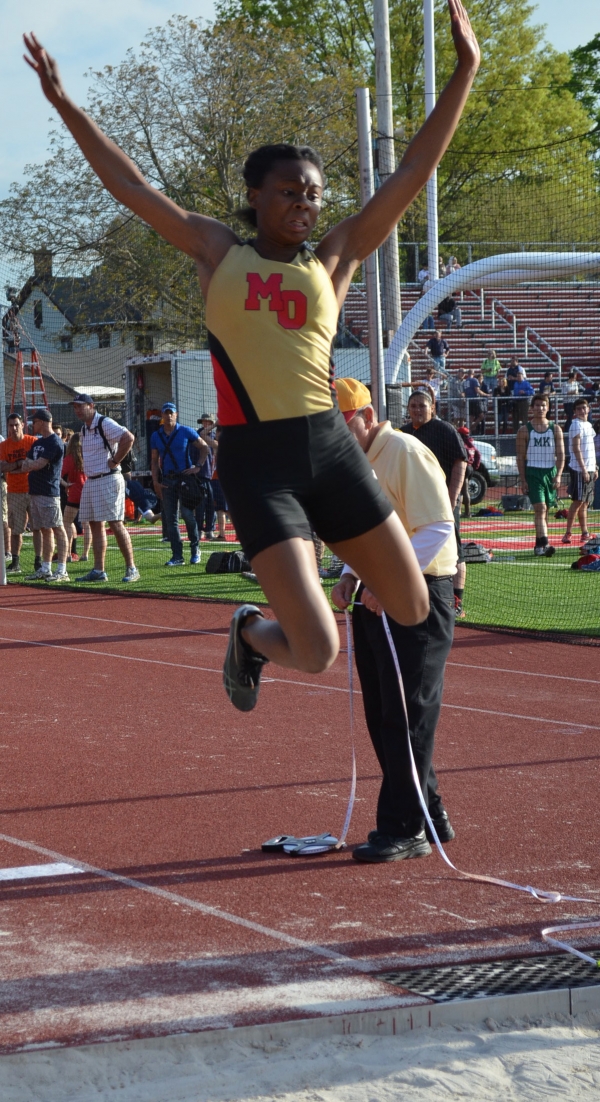 Maurice Saunders, according to his daughter, a standout senior track athlete at Parsippany High School, loves the sport and often checks other runners' times. At dinnertime, the family often spends a half hour discussing running.

So, when Saunders prevailed in the 100-meter dash in a meet record time of 11.96 on the first day of the Morris County Championships at Boonton High School on Tuesday, May 13, she looked for her dad, who once competed in track at a parochial school in Philadelphia. After all, he was the one who encouraged her to go for what she has wanted since she was a freshman.

It was the third consecutive county crown in the 100 for Saunders, who ran an 11.93 in the semifinals, a personal record.

After one day of competition, Mendham is in first place with 31 points. Hanover Park (26), West Morris (22) and Whippany Park (21) currently hold the second, third and fourth spots after the completion of seven events. The championships conclude today, also at Boonton, at 4 p.m.

Saunders, headed to Rutgers in the fall, said she didn't know what to expect going into the county championships. However, everything simply fell into place.

"Anything can happen," Saunders said. "My focus was on my performance and what I could do. My start, my drive phase were good. I kept speeding up. Everything clicked perfectly."

It's hard to believe but the 18-year-old Saunders is nervous going into every meet, even if it's a dual one. Her starts on Tuesday made her feel that she feel she could achieve something special. A year ago at this meet, she clocked a meet record 12.09.

"I was strong going into the final. I was loose, hydrated," she said. "I warmed up a lot. The weather was perfect. It was in the 60s for the NJAC. Today was a little warmer. The heat is perfect for sprint races. My muscles were fully warmed up and that helped me break 12.0."

Saunders, no doubt, has the events before and after the event well chronicled. She loves to take photos with her cell phone.

"I take pictures of everything," Saunders said. "I love moments, events. I like memories. I value my photos so much."

At Rutgers, Saunders will major in forensic psychology.

"I'm into law and criminal stuff," she said. "I like going inside the mind."

As a member of the track program at Rutgers, Saunders has other ambitions.

When the Morris County Championships resume today, Saunders has more to strive for, including a third straight championship in the 200 meters. She's also on the 4x400 team. Last week, the Red Hawks claimed the NJAC Small Schools Championship.

"I wanted a personal best," Orji said. "My series was all 20 footers. I was inconsistent at first because I ran the 100 right before this. I had to open my strides for that. I got it down. I liked my speed down the runway."

Orji, third in the 100, prevailed despite a sore right heel.

"My heel's hurting a bit," she said. "When I attack the board, I go too hard on the heel. It's really not that bad."