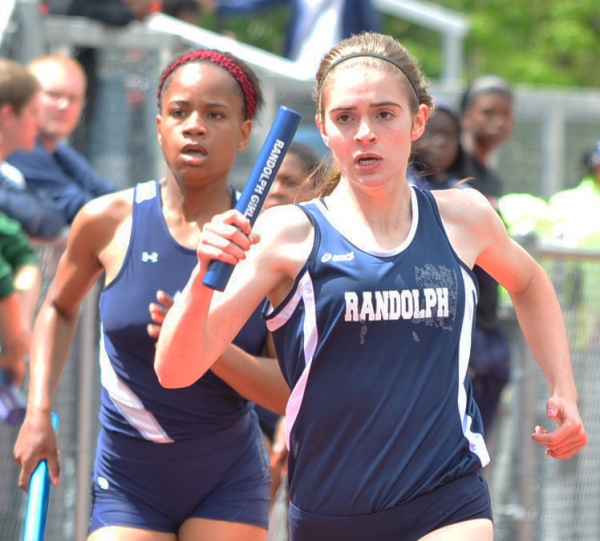 Photos by Maryann Harlow Nora May McSorley ran the first leg of the 4x400 for Randolph.
Rate this item
(0 votes)
Tweet

RANDOLPH _ Each time Marley Brackelmanns-Puig enters the locker room at Randolph High School, she shouts out Nora May McSorley's name.

"Nora May makes my day," Brackelmanns-Puig said. "She's so amazing. She's got such a great attitude. Nora May gets along with everyone. It's so nice to be around her."

Not only does McSorley, a sophomore, win people over with her upbeat, positive personality, she has stepped up and taken the Rams to great heights on the track.

On Saturday, May 24, McSorley, already triumphant in the 1,600 meters, claimed gold in the 800 meters and ran the opening leg of the 4x400 relay, sending Randolph to its sixth consecutive North Jersey Section 1, Group IV championship.

"Out of all of us, Nora May is the most dedicated," Liz Wellman said. "She pushes us. We used to push her. It's switched around. Nora May is young but she's taken on some of the pressure. She's been stepping up to the plate."

McSorley's performances meant a great deal because Randolph, which scored 93.5 points to beat Montclair out by more than 21 points, has been hit hard by injuries. Liz Lansing has been sidelined with a stress fracture. Wellman has been experiencing tightness in her shin. Wellman ran the mile at the sectional meet but pulled out of the 800.

According to McSorley, her teammates are behind her success. It's not the other way around.

"My teammates have been pushing me," McSorley said. "I've been staying with them in practices. They go hard, as hard as they can. They're all so supportive of me. They all want me to do my best."

As a freshman, McSorley struggled to keep up with Lansing, Wellman, Carole Harsch and Margaret Thomson. Her objective was to stay 100 meters behind them in practices.

Slowly, that gap began to close. Rams coach Len Pietrewicz encouraged the older girls "to pull McSorley along," according to Wellman.

"Coach Pietrewicz thought Nora May should be with us," Wellman said. "She didn't have the drive before. Now she has it. Nora May's become very fit."

McSorley, of course, has great admiration for her older teammates. She also runs cross country with them.

"They're all so awesome," she said. "I heard about them when I was in eighth grade. They're the stars. It's amazing to be with them. I wasn't winning material before. I didn't have much confidence."

As someone who enjoys history, McSorley, no doubt, relishes the role she had in helping the Rams build on their legacy. Her father, Guy, was an athlete as well, playing soccer for Kearny High School. Her brother, Liam, is in eighth grade and participates in track, cross country and soccer.

Next weekend, McSorley and the top six finishers from the public school sectional events will make trips to Egg Harbor Township or South Plainfield to compete in the groups.

"I was a little worried," Brackelmanns-Puig said. "I didn't know her and what she could do. At 150, I felt I could pass her. I went to the outside and picked it up."

For the next 50 meters, they were neck and neck. After passing 200 meters, Brackelmanns-Puig returned to the outside, "tucking in behind her to save energy." On the straightaway, she broke away on the outside and completed the relay in 4:07.13.

"It was very exciting," said Brackelmanns-Puig, committed to Stevens for field hockey. "I'm so glad we could win again."

Tymia Joseph, a Morris Knolls sophomore, had an exceptional meet and went home with four medals, including one for taking first in the long jump (16-10 1/4). Joseph was runnerup in the triple jump and sixth in the 100-meter hurdles. She and the Golden Eagles were fourth in the 4x400 meter relay.

"I feel very accomplished," Joseph said. "This is really big for me. My speed and lifting my knees were important in the long jump. I'm looking forward to Egg Harbor."

"I just took a real deep breath and pushed everything out," said Bongo, a senior. "I focused more and didn't let the other girls' throws get in my head."

Bongo, sixth in javelin at the Morris County Championships, liked that there was no 100-foot mark.

Marianna Loeken of Randolph took second in the hurdles and Wellman and Harsch were third and fourth, respectively, in the 1,600-meter run.