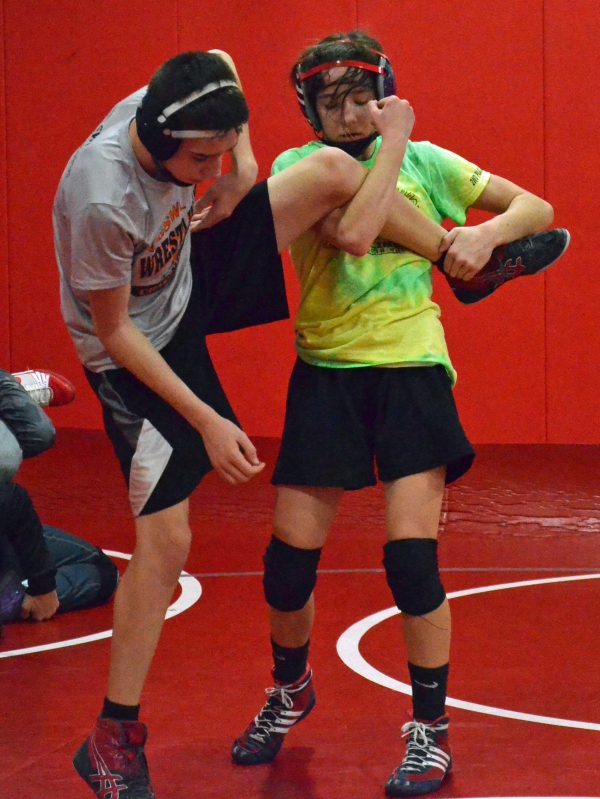 LITTLE SILVER _ Sydney Petzinger was the first. No one can ever take that piece of history away from her.

Taking home a silver medal and also advancing to the state tournament at Boardwalk Hall in Atlantic City in two weeks was Parsippany's Hailey Budney. The top-seeded Budney, a senior, dropped a 2-1 verdict to Veronica Whitacre of Monroe Township in the North 136-pound final.

The top three wrestlers in each of the 10 weight classes in both the North and South Regions move on to the state tournament.

Competing before a loud and boisterous crown in the packed field house at Red Bank Regional High School, Petzinger had to come back from an early deficit to earn the crown in the initial NJSIAA-sponsored girls wrestling regional tournament. New Jersey is the 12th state in the country and the first in the Northeast to have girls wrestling as a varsity sport. Two-hundred and sixty-four girls from 96 schools competed at the one-day event at the northern Monmouth County school.

"I was a little nervous at the start. There were a lot of fans here and maybe that was a factor early," said Petzinger, a 15-year-old sophomore and top seed in her bracket. "I was able to recover after regaining my focus."

A takedown by second-seeded Safforld gave the Buccaneer grappler a 2-0 lead in the opening period and the Belleville wrestler was up 2-1 after the first two minutes. But Petzinger, an eighth-place finisher at last year's national high school tournament in Fargo, N.D. and a big tourney in Texas and also first at this season's Red Bank and Bloomfield scholastic Garden State tournaments, rallied with three back points in the second period for a 4-2 advantage before a cradle capping a five-point move led to the eventual pin of Safforld, the wrestler from Essex County to earn the gold medal.

After receiving a bye through the first two rounds, Petzinger (18-0) pinned Breanna Cervantes of Secaucus in 1:37 in the quarterfinals and packed Elle Sumarokov of Fair Lawn in 1:01 in the semifinals.

"I regained my footing and my balance and I was quite confident I could come back," said Petzinger of her third-period fall over Safforld. "I'm very happy to be moving on. It's just a great, special feeling."

Budney edged by Whitacre in final

Also doing a solid job was Petzinger's teammate, Budney, who gave up a takedown in the first period for a 2-0 deficit against the second-seeded Whitacre. She narrowed the bout to 2-1 on a stalling point against her opponent from Monroe in the third period but Whitacre was able to hang on for the one-point victory.

"It was a real defensive matchup. It was hard to score against her," said Budney (10-1). "I had pinned her (Whitacre) in a Super-32 tournament in North Carolina about a year ago but, this time, I guess it was her turn. I will look forward to maybe another matchup in Atlantic City. I'm still confident I can do well there."

Budney, who will go on to wrestle next season at the University of the Cumberlands in Williamsburg, Ky. on an athletic scholarship, received a bye in the preliminary round then won by technical fall, 15-0, in 5:10 over Felicia Chen of Randolph in the Round of 16 before recording a 7-0 victory over Andrea Peralta of Bergenfield in the quarterfinals and pinning fourth-seeded Jaala Williams of Montclair (an eventual bronze medalist and Atlantic City qualifier) in 5:45 in the semifinals.

Budney trailed Williams, 3-0, in the first period before rallying for the win.

"I just hit a double-leg takedown and then followed it up with a power half-nelson," said Budney after the semifinal come-from-behind triumph over the tough Williams. "She was persistent, but I kept shooting for the takedown on offense and eventually it paid off with the winning combination."

Budney is also a Bloomfield and Red Bank tournament champion and a top-drawer competitor on the national level.

Petzinger and Budney's efforts at the regionals are not surprising. Petzinger, who has three brothers, took to the mat in third grade when she joined the Parsippany Wrestling Club at the urging of classmate Anas Sawalhi. She always has been respected by the boys, noting that "we all know each other."

She went into the regions with a 6-0 record, including five pins, in girls tournaments. Petzinger's favorite moves are the arm bar, cradle and riding legs, which is a maneuver used when trying to turn an opponent. Riding legs often precedes a pin.

Budney, 6-0 with six points prior to the regionals, has been wrestling for eight years but almost didn't get the chance to. After seeing a video presentation given by the Parsippany Wrestling Club when she was in third and fourth grade, she made a plea to her father, Robert, but was told no.

"My older brother wrestled and my dad was worried about it," Budney recalled. "He used to tell me I might get sick, that the flu was going around. By fifth grade, he ran out of excuses."

A "little sad" because it's her senior year, Budney, a member of the cross country and track teams, plans to "make it count." She, too, is a fan of riding legs and, hopefully, will be in a position to make use of her skill in that area in the coming weeks.

State tournament slated for March 1 and 2

The girls state tournament will be contested along with the boys states adjacent on Friday, March 1 and Saturday, March 2 and the boys event also opening on Thursday, Feb. 28. The boys began wrestling state tournaments in mid-March of 1934 at the first site for the event, Union High School.

"I'm just proud of what our two competitors (Petzinger and Budney) were able to accomplish today, along with the rest of the girls," said Parsippany coach Joe Dasti, himself a state qualifier in 1982 (pre-quarterfinals) and 1983 (quarterfinals), both at 101 pounds, at Princeton University's Jadwin Gym.

"Sydney and Hailey really both gave it their all and they will be again strong candidates for a title at the states in two weeks," added Dasti, also a talented baseball player at Governor Livingston of Berkeley Heights High School in Union County in the early 1980s.

Winning the Most Outstanding Wrestler award in the North Region was Phillipsburg's top-seeded Jewel Gonzalez at 161 pounds. She had three first-period pins, including a fall in 1:33 over second-seeded Donna Walker of New Brunswick in the final round.

Among those taking home third-place finishes in the North Region to qualify for the states were Shannon Gulick of Hackettstown at 105 pounds and Bri Simic of High Point at 161 pounds. Just missing a bid to Atlantic City were fourth-place North Region finishers Katrina Kling of Warren Hills, the top seed at 111 pounds, Courtney Hoff of Warren Hills at 118 pounds and third-seeded Abigail Wittig of Newton at 127 pounds.

In the South Region, Princeton High School's Chloe Ayres was the Most Outstanding Wrestler after following up two pins with a 9-0 major decision over second-seeded Johnae Drumright of Trenton Central in the 105-pound final. The No. 1-seeded Ayres is the daughter of Princeton University men's wrestling coach Chris Ayres, who was among the many in attendance rooting on their child or relation or friend.

According to officials who attended both events, the excitement and enthusiasm at the girls Region tournaments Sunday was at least equal and quite possibly higher than the boys District 20 wrestling tournament that was contested at Red Bank Regional High School a day before. The crowd size also rivaled or bettered that from the district tournament, which featured 10 schools from the Northern Shore area of Monmouth County, Middlesex County and always powerful North Hunterdon in Clinton from Hunterdon County.