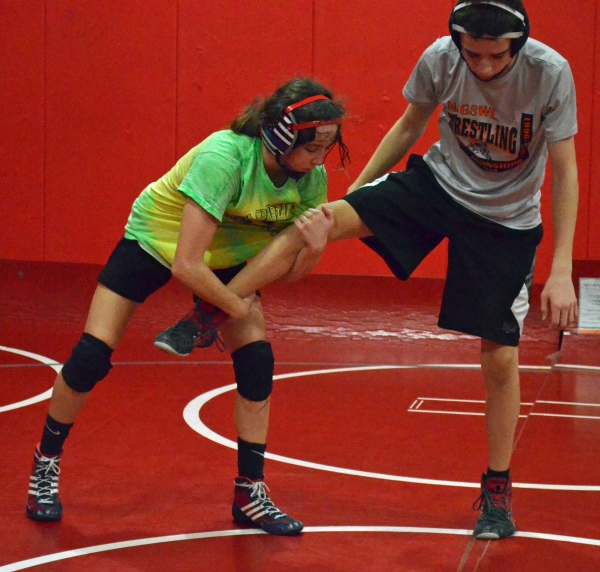 Photo by Sandy Seegers Sydney Petzinger, left, is pictured in a practice in February 2019.
Rate this item
(7 votes)
Tweet

UNION _ Sydney Petzinger displayed dominance in every facet of her many-pronged mat repertoire.

In the final at 100, Petzinger took down Isabella Santos of Elizabeth for a fall in 1:35 and wound up winning most outstanding wrestler honors at the tournament that played to a full house of over 1,500 fans.

Petzinger thus qualifies for the state tournament that will be held from Thursday, March 5 through Saturday, March 7 at Boardwalk Hall in Atlantic City.

The Red Hawks' prolific and highly accomplished nationally ranked wrestler will be aiming for a second straight gold medal and a victory at the states will be a first for anyone from the Parsippany high schools should she claim a second New Jersey state championship. The two previous winners, both from Parsippany High School, were Roy Baker at heavyweight in 1970 and Mike Codella at 141 pounds in 1983.

"I have been training extra hard, both in running and weight lifting," said Petzinger, who went 24-8 wrestling for the Red Hawks boys team this year, including earning a first-round win in the Morris County Tournament. "That time spent working both in the weight room and outside has really helped me and paid off at the most important time of the season."

Petzinger, 20-0 a year ago wrestling against girls in the first year of the sport for the NJSIAA (the first Northeastern and still only Atlantic seaboard state that offers girls wrestling on a varsity level), defeated Allentown's Jasmine Aizley, by a 10-0 major decision as a sophomore last year in the 100-pound 2019 state final.

"I used some arm bars (both single and double) and elbow passes to go along with a claw series," said Petzinger of the moves she used to record her four pins which came in 36 seconds in the first round, 3:21 in the quarterfinals and in 53 seconds in the semifinals before her first-period fall in the championship bout. "I've been gaining quite a lot of confidence as the season has moved into its final stages."

"This was a really a special day," said Anderson, also a gymnast in the fall for the Marauders. "All my teammates gave me a lot of support and I'm so proud of the way everything turned out."

Winners from Sussex County included Wallkill Valley's Samantha Larsen at 114 pounds as she defeated sophomore Katrina Kling of Warren Hills, 7-3, in the 114-pound final. Larsen, a senior, had missed the entire 2018-2019 season with a shoulder injury sustained in a freestyle match in December of 2018.

Kittatinny sophomore Kiera Hubmaster, a second-place finisher in the 235-pound bracket at last year's state tournament, earned a berth in Atlantic City by taking third place at 161 pounds, pinning Christina Braid of Montclair Immaculate in the consolation bout after Pace pinned Hubmaster in 3:25 in the semifinals.

Morris Hills freshman Kyara Montoya, a consolation winner, will also be going to Boardwalk Hall. She pinned Plainfield's Genesis Melgar in 1:45 in the 128-pound consolation bout.
Taking a silver medal for High Point was Sophia Lombardo, who lost in the 151-pound final to West Orange's Precious Opara.

A total of 33 wrestlers in the 11 weight classes advance to Atlantic City to go along with 33 from the South Region tournament which was also held Sunday. All first, second and third-place finishers from the two regionals moved on.

The girls state wrestling tournament will run concurrently with the 87th annual boys wrestling state tournament that will include fourteen weight classes and feature 336 wrestlers.