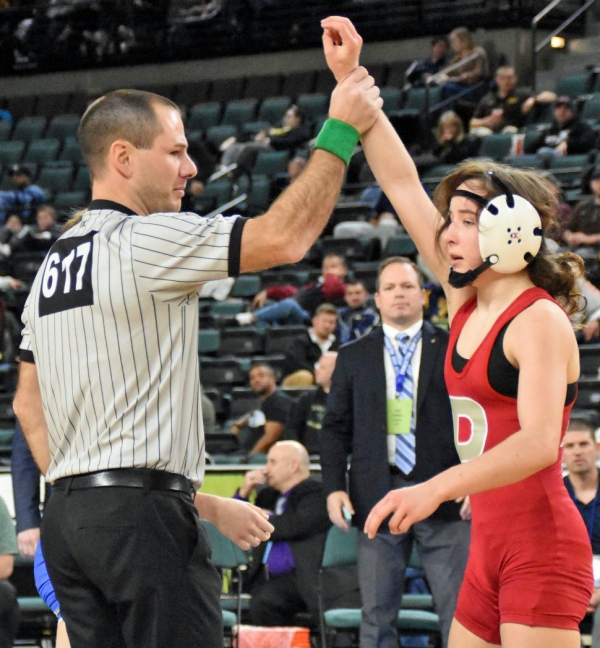 Petzinger became the first-ever two-time state champion in the Parsippany school district and one of the special few from Morris County to ever win a pair of New Jersey scholastic wrestling titles.

A junior 100-pounder, Petzinger methodically and fundamentally worked for a pin in 5:01 over Princeton High School freshman and second-seeded Ava Rose as she punched her ticket to Garden State wrestling immortality in the second-ever state girls wrestling tournament 100-pound final on Saturday, March 7 at Boardwalk Hall before an enthusiastic crowd.

The 16-year-old mat phenom performed at her peak abilities before a cheering and screaming crowd of more than 10,000 fans at Boardwalk Hall.

Petzinger will go to the national tournament later this year in Fargo, N.D., where she finished eighth a couple of summers ago, and at least one other national amateur girls tournament.

Petzinger had defeated fourth-seeded Alisa Safforld of Belleville in the state semifinals on Friday night, 3-1. In that bout, she had a takedown for a 2-0 lead in the first period and an escape for a 3-0 advantage after the second period, then gave up an escape to Safforld in the third period before earning the two-point victory with both wrestlers involved in a stalemate most of the rest of the final period's two-minutes.

"I really wasn't satisfied with my performance overall on Friday," said Petzinger, who had a 23-9 record against boys this year and is undefeated against girls in her two-year Red Hawks career. "Today, I came out with a lot more energy for the final and I felt really, really good. I was determined to be the aggressor and everything worked out great. As the bout proceeded, I gained more and more confidence. I used a quick, passing move inside for the pin and was able to push her (Rose) to her back."

Included among Petzinger's wins this season was a first-round win at the Morris County boys wrestling tournament over Randolph's Tyler Fabin by a 12-2 major decision verdict at 106 pounds for one of the first wins by a girl over a boy, the first one since 2003 by a Madison girl in MCT history and maybe only the second girl ever. Then Petzinger ran into a buzzsaw in Delbarton's MCT second-seeded freshman Tyler Vazquez, who prevailed in a well-contested bout. Petzinger was battling a sore throat during the MCT competition.

Vazquez finished third at the boys state tournament Saturday at 106 pounds, taking home the bronze medal with a 5-2 victory over Brick Township's Evan Talmadge in the third-place consolation round.

Petzinger was very disappointed with the 16th seed she received for the MCT in January at the county seeding meeting.

"If Morris County had at least one woman on its seeding committee, maybe it might have given me a better opportunity for a higher seed at the counties, maybe as high as 10th or so, or maybe a little higher," Petzinger said. "We will see how everything turns out next year at the counties. I just want to be given a fair chance."

Petzinger was the Most Outstanding Wrestler's at this year's North Region girls wrestling tournament at Union High School on Sunday, Feb. 23 with a pin in 1:35, the second of her two matches in the tournament, over Elizabeth's Isabella Santos in the North Regional final round.

A year ago, Petzinger earned the first-ever New Jersey state girls wrestling individual crown when she earned a 10-0 major decision over Allentown's Jasmine Aizley in the final round.

"I'm thinking about wrestling the boys next year maybe, it would be thrilling to compete maybe at the states and win a medal," Petzinger said. "And it would be a great feeling to get three consecutive state championships, too."

Delbarton's Mike Grey, who had a solid four-year collegiate carer at Ivy League Cornell University in Ithaca, New York became the first and so far only four-time state champion from Morris County in state history in 2006 with a career record of 158-2.

Petzinger was the No. 1 seed both this year and last year at the girls state tournament at also at the two girls regional tournaments. Sixty-six girls in 11 weight classes, the top three finishers from each of the Northern and Southern Regions, wrestled at the states Saturday with one more weight class added for the girls tournament than the 10 weight classes down in Atlantic City in 2019.

Top-seeded senior Jewel Gonzalez of Phillipsburg hammered her way to the 161-pound state championship for a second straight year and secured a second consecutive Most Outstanding Wrestler (MOW) award by pinning second-seeded North Bergen sophomore Amanda Pace in 4:21 in the final round. In the semifinals on Friday night, Gonzalez pinned fourth-seeded Hubmaster of Kittatinny in 2:49. Gonzalez thus earns the 35th state title in the illustrious Stateliners wrestling history.

Gonzalez celebrated her state championship Saturday by taking a dip in the icy Atlantic Ocean for the second consecutive year, a Phillipsburg Stateliners wrestling tradition that goes back to the early 1950s for the boys state tournament.

Other two-time winners of the state girls wrestling tournament Saturday included Princeton High School junior and top seed Chole Ayres, who decisioned senior Johnae Drumright of Trenton Central, 4-3, for her second straight 107-pound title in the final. Ayres is the daughter of Lori and Chris Ayres (highly successful Princeton University men's wrestling coach who directed his team at the Eastern Intercollegiate Wrestling Association (ECWA) championships this weekend on Friday and Saturday at Lehigh University in Bethlehem, Pa. Both Lori and Chris Ayres were instrumental and in the NJSIAA decision to make girls wrestling a varsity sport for the first time for the 2018-2019 scholastic year as New Jersey became the first state in the Northeast and the 13th overall to offer girls wrestling as a varsity sport with most states having it in the Southwest, especially in Texas and Oklahoma, where it is very popular.

Other first-time winners for the girls were freshman Kira Pipkins of Bloomfield at 114 pounds (6-4 win by sudden victory (SV) No.1 over sophomore and second-seeded Katrina Kling of Warren Hills (21-5 for season, 31-7 for career), senior Noran Elmahroukey of New Providence (31-2 for season and career) winning over sophomore Kalli Roskos of Delran at 121-pound final with pin in 1:33), sophomore second-seeded Emma Matera (25-1 for season, 40-5 for career) of Delran with win over 2019 state champion and top-seeded sophomore Gabby Miller of Monroe Township (9-2 for season, 23-3 for career) by 5-4 decision at 135 pounds, freshman Alexis Rosano (18-3 for career) with 9-4 win over Jackson Memorial sophomore Jordyn Katz (27-4 on season, 39-13 for career) at 143 pounds.

In addition, sophomore and top seed Kerly Borbor (19-0 for season) prevailed at 180 pounds over junior and second-seeded Amirah Giorgianni of Mainland Regional in Linwood in Atlantic County by ultimate tiebreaker 9-5 win at 180 pounds and West Orange No. 1-seeded senior Sandra Guerrero (21-0 on the season, 39-3 for career), who defeated senior and second-seeded Joelle Klein (15-1 on season, 26-2 for career) of Lower Cape May Regional, 7-0, in the 215-pound final.

Delbarton's Anthony Clark, headed to wrestle at Princeton University next season, won his third state championship with a 3-0 victory over Bergen Catholic in the 138-pound boys final. Clark's cousin, Hanover Park junior Joey Olivieri, won the 132-pound championship with a 1-0 win over Bergen Catholic's Dylan Cedeno in the final round. Clark is among just a few other three-time Morris County state boys wrestling champions and Olivieri could win a third next year

The biggest standing ovation was given to Paulsboro High School's Brandon Green, a 2019 state champion at 170 pounds who cannot wrestle anymore due to a heart condition.

Green, who would have been the No. 1 seed at 170 this year for Paulsboro. He had an unbeaten record until suffering a dangerous episode in February. After the procedure following the medical emergency, he had an ICD (implantable cardioverter defibrillator) installed after the incident in which he had to be sedated for two days. He can't wrestle anymore but he should live a full and healthy life. He had an athletic scholarship to Virginia Tech, which the Blacksburg, Va. school said it would honor.

After the boys award presentations, Green came out to lead the Parade of Champions and a roaring standing ovation crescendo greeted him. The standing ovation lasted at least two or three full inspired and moving minutes by the assembled throng at Boardwalk Hall as the wrestling community came together for one of their own.

Another wrestler that was celebrated was Christopher "C.J." Morgan, from West Orange High School, who was honored posthumously.

Morgan, a 2015 West Orange graduate who finished fifth at that season's state tournament and also won the Most Outstanding Wrestler (MOW) award at 182 pounds that year at the Essex County Tournament as a senior, was killed last June after a training accident near the West Point campus where he was attending school and wrestling at 184 and 197 pounds for the Cadets. He would have been a senior at West Point this year.

A very popular figure in West Orange, where he also played football and was in the band, Morgan, 22 years old at the time of the tragedy, was killed when an Army tactical vehicle overturned going through a hilly area. Morgan, one of the most popular figures in Essex County and state wrestling and also a very good football player, was also given a big ovation.

Besides the award presentations and the Parade of Champions for both the girls and boys, Delbarton was awarded the No. 1 team in the state recognition with the full team and coaches coming out to be honored by the crowd before the boys finals started. The Green Wave won this honor from the New Jersey Wrestling Writers Association (NJWWA).

The Green Wave (18-3) ended a run of six straight Bergen Catholic final No. 1 team in the state finishes from 2014 through 2019 with South Plainfield winning the initial NJWWA designation in 2013. Another honor for Delbarton came when head coach Bryan Stoll was named the District 9, Region 3 and state wrestling coach of the year during the award presentations.