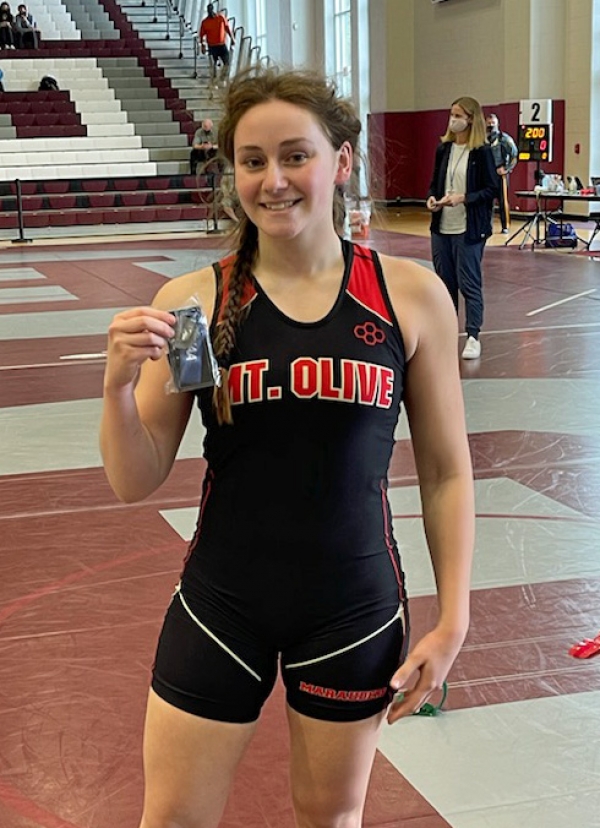 Photos courtesy of Mount Olive High School Carley Anderson displays the silver medal she received for her standout effort in the 128-pound weight class at the state tournament.
Rate this item
(5 votes)
Tweet

PHILLIPSBURG _ Mount Olive's Carley Anderson gave it everything she had but Emma Matera had a little more in reserve and a bit more energy remaining in the tank.

Matera, a junior representing Delran, pinned Anderson, a senior, in 1:23 in the 128-pound championship at the third annual NJSIAA Girls State Wrestling Tournament on Saturday, April 10 at Phillipsburg High School.

"I just gave it my best and she came through with the one big move that helped turn around the bout," said the second-seeded Anderson.

In the North Region final at 135 pounds at Union High School a week ago, Anderson edged Jefferson sophomore Maura White, 8-7, by ultimate tiebreaker for the gold medal. Anderson took home a silver against the top-seeded Matera, now a two-time state champion. Anderson opened the state tourney with a 13-1 major decision victory over Trenton Central senior Iwalani Arguedas in the quarterfinals and then a 3-2 win over Bordentown junior Lexi Mazzella in the semifinals. Anderson, a top-rated gymnast for Mount Olive, finished fifth at 135 pounds at last year's state wrestling tournament in Atlantic City.

Also taking home a silver medal from the state tournament was Kittatinny junior Kierra Hubmaster, who was pinned in 1:42 in the 161-pound final by Manalapan senior Jess Johnson.

Earlier in the tournament, top-seeded Hubmaster, who brought home a bronze medal at 161 pounds in 2020 and a silver medal at 235 pounds in 2019 as a freshman, topped freshman Olivia Palmer of Timber Creek by pin in 1:46 in the quarterfinals and decisioned junior Jordyn Katz of Jackson Memorial, 4-1, in the semifinals. Hubmaster ended 2021 with an 11-1 record, with nine of the wins coming by pin.

Sydney Petzinger, Parsippany High Schoo's two-time state champion, possibly could have met Ayres in the final. But Petzinger did not take part in the North Region Tournament so she was not a qualifier for the state tournament. That likely would have been a very interesting, hard-fought bout.

Ayres, along with senior Jess Johnson of Manalapan, became the first three-time winners (only third year for girls wrestling as a varsity sport in 2021) of the NJSIAA Girls Wrestling State Tournament and are among only 33 overall three-time winners for the boys and girls.

Petzinger, a highly-regarded and nationally-ranked wrestler who had finished in the top eight at a Fargo, N.D. club tournament and also took high places at other amateur tournaments, struck gold in both 2019 as a sophomore and 2020 as a junior, each time at 100 pounds.

Ayres will next compete in wrestling at Princeton University, where her father Chris serves as head coach of the Tigers. Princeton University is starting a club wrestling team for women in 2021-22. Chloe Ayres could well be a key leader for the Tigers' team next year. Chloe Ayres' mom, Lori, played a key role in the NJSIAA beginning girls wrestling as a varsity program in 2019 and has been a contributor to the sport.

With 33 boys and girls three-time state champions in New Jersey, including four-time state champions Mike Gray of Delbarton, Andrew Campolattano of Bound Brook and Nick Suriano of Bergen Catholic and Anthony Ashnault of South Plainfield, four-time state champions. Suriano and Ashnault were undefeated throughout high school. Suriano, who hails from Paramus and transferred from Penn State to Rutgers, and Ashnault earned NCAA Division I national championships at Rutgers in 2019, becoming the first Scarlet Knights ever to earn individual national NCAA Division I wrestling crowns. Both were also at the U.S. Olympic trials attempting to qualify for the United States Olympic team.

Anthony Ashnault's media company helped run the prestigious Mobbin Classic for girls and boys, where Petzinger finished second to Ahsia Torres of Perth Amboy. Torres, a junior, did not compete at the regions or the state because Perth Amboy shut down operations and sports in January for because of rising COVID-19 cases.

Other winners at the state girls tournament included Bloomfield's sensational sophomore Kira Pipkins at 121 pounds. Pipkins decisioned Warren Hills junior Katrina Kling 2-0 in the final round to garner her second straight state title. A year ago, Pipkins came back with a late point in the third period to tie it, 4-4, and then won with a takedown in overtime, to defeat Kling, 6-4, and win her first state championship as a freshman.

In the 128-pound final on Saturday, Old Bridge junior Gabrielle Miller captured her second state tournament title with a 6-2 decision victory over Paramus senior Emily Klein in the final round. Two years ago as a freshman wrestling for Monroe Township, Miller won the title at 145 pounds. Last year, she fell to Delran's Matera, 5-4, in the final round at 135 pounds, Matera's first state championship. Now Miller will have a chance to win at third state title in 2022 for her Old Bridge school.

Also coming up with a big-time performance was Lakewood High School sophomore Jayla Hahn, who decisioned North Hunterdon junior, Jodi Holder, 10-8, in the final round at 143 pounds. Hahn trailed, 8-6, entering the third period, but scored a point when Holder allowed her to escape at the beginning of the final two-minute session, and then tied it up 8-8 when Holder was called first for a stall warning and then for a stall point. A takedown with 25 seconds left won it for Hahn.

Jayla Hahn's uncle is three-time Lakewood High School state champion Damion Hahn, now the wrestling coach at South Dakota State University in Brookings, S.D. Hahn was a national NCAA Division I individual wrestling champion for the University of Minnesota in his junior and senior years in 2003 and 2004 and was a part of two national championship University of Minnesota Golden Gopher teams in his freshman and sophomore seasons in 2001 and 2002.

The younger Hahn made an impact on her own and came up with maybe the best performance of the day. And she still has a chance to win two more state championships in 2022 and 2023. Hahn attends Central Regional High School in Bayville, but wrestles for Lakewood High School as part of a co-op wrestling team in the two Ocean County communities.

Other champions Saturday included sophomore Isabella Santos of Elizabeth. Santos nailed down her first state title with a pin in 2:27 over Paramus sophomore Olivia Klein in the final round. At 107 pounds, senior Izabella Frezzo of Becton Regional in East Rutherford decisioned senior Alisa Safforld of Belleville, 6-2.

Top honors at 215 pounds went to senior Mia Lazaurs, who earned her first state tournament gold medal and championship by pinning junior Gianna Fauro of Bloomfield in 1:59 in the title bout.

Another fourth-place finisher was sophomore Maura White of Jefferson at 135 pounds. White was decisioned by junior Lexi Mazzella of Bordentown, 8-4, in the consolation bout.