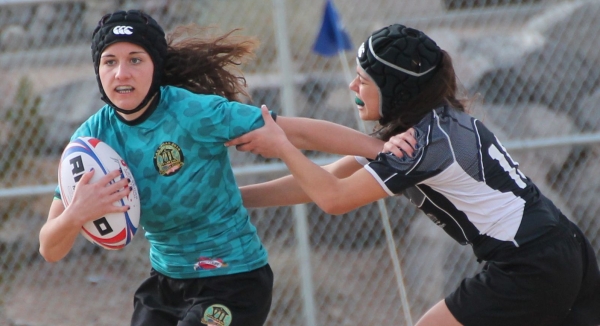 It was an unrelenting winter in the Northeast but Tess Feury and Kat Ramage escaped the cold and unpleasant weather for several days in late January to compete in the 2014 USA Sevens Rugby Tournament in Las Vegas.

Feury, a senior at Villa Walsh, and Ramage, a junior at Roxbury High School, were members of the Atlantis Team which was runner-up to British Columbia in the Cup Championship of the high school girls division.

Feury, who has focused on rugby the last two years, also participates in soccer and track. Her commitment to rugby landed her a spot on the U.S. High School All-American Team in 2013 and one on the Empire Rugby Team that played in the Regional All-Star Games. These opportunities afforded her the opportunity to train at the Olympic Training Center in Chula Vista, Calif. with some of the strongest players in the country.

Ramage is an standout goalie and throws the shot put for Roxbury. She, too, was a member of the Empire Team last year. Both girls play Sevens for the Blaze and are members of the Morris Rugby Girls High School Team which won the New Jersey State Girls Championship in 2013.

"Girls HS rugby is just exploding," said Feury. "The game is fast, intense and the level of competition is improving. In New Jersey, the spring 15s season leads into the summer sevens. You can play from February until August. Many college programs are expanding with team and varsity level programs."

Sevens rugby is the style that will be be utilized in the 2016 Summer Olympics.

"In sevens, speed, strength and mental quickness are needed," Ramage said. "With only seven-minute halves, possession and control are key. The coaches do not have timeouts so you need to think and execute on the fly."

Feury and Ramage hope other girls will come out and give rugby a try. It offers girls the opportunity to stay fit, be challenged, travel and meet some exceptional athletes.

To play for Morris Rugby, no experience is necessary.

For more information on the Morris Rugby Girls Team, contact coach Tom Feury at This email address is being protected from spambots. You need JavaScript enabled to view it. or visit www.morrisrugby.com.

Cochrane will attend the University of Pennsylvania, where she plans to obtain a degree from the College of Arts and Sciences. Sharkey has committed to Bucknell University.

"Aside from the prestigious education, the University of Pennsylvania stood out to me because when I stepped onto campus, I felt as if I was at home," Cochrane said. "The coaches told me how much they believed in me and it really meant everything to me. I fell in love with the team and I am looking forward to stepping onto Franklin Field."

Cochrane credits much of her success to the people she has had surrounding her throughout the years.

"I want to thank my mom and dad for always being there for me," She said. "They have been by my side though everything. I also want to thank my coaches, who make practice my favorite part of the day. In addition, I want thank Chester HPC, owned by Jeff Copen, for their amazing staff and phenomenal facilities. Finally, I want to thank my sisters, Mikayla and Chelsey, and my brother, Victor. From the busy car rides visiting colleges in the summer, to cheering me on at the meets, they have been my greatest supporters and I love them so much!"

Sharkey intends to major in business management at Bucknell.

"I liked Bucknell a lot because I got a really good feel on campus," Sharkey said. "I loved the coach and his excitement for running. The girls on the team were really nice and fun to be around and the school is known for having exceptional academics. It was an all-around good fit for me."

Brennan has accomplished much, running an 18:01 - the second fastest time - in the 5K at the Randolph Cross Country Invitational, recording an 18:05 at Greystone (No. 5 all-time), setting a course record at Villa Walsh and posting a 10:52 in the 3,200 meters.

She cited her parents as well as her track and field coaches and teammates with supporting her. She also credits her father's friend, Mr. Porter, for providing workouts so she could run her best, and her trainer from Pro-Activity who has been a big inspiration while helping her improve her strength.

View the embedded image gallery online at:
https://soar-nj.com/sports/rugby/item/810-rugby#sigProIde53a0cca28
More in this category: « Passing, rushing for charity