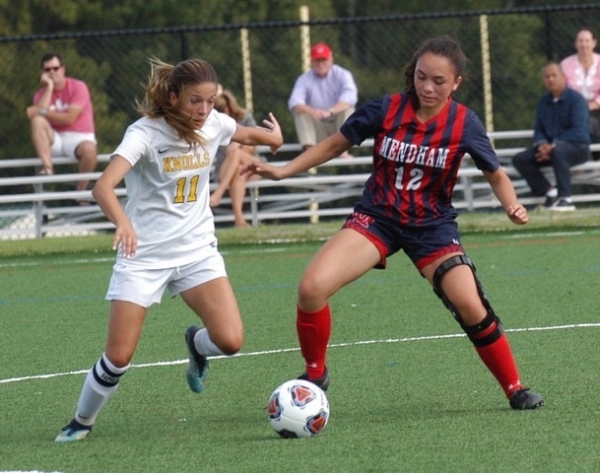 MENDHAM _ It had been three years since Mendham girls soccer had buried the ball in the back of a Morris Knolls net.

Seems the Minutemen were finally due for a score.

Lexi Donofrio’s connection off a Megan Graziano cross lifted Mendham to a 1-0 victory over Morris Knolls in a girls soccer contest on Monday, Sept. 9 on their new upper-level turf field. Goalkeeper Aubrey Egerter registered four saves for the Minutemen (1-2).

Katelyn Walsh made eight saves for state-ranked Morris Knolls, which dropped to 0-2 and played without standout midfielder Madison Palma, who sat out the game with a leg injury. Last year’s Morris County Tournament champions played an even game with the exception of Donofrio’s lefty kick in the 52nd minute that provided the only score.

"They have always been close and we have always had chances," Mendham Coach Mark Lahey said. "We were lucky that Lexi got on the end of that one. Our defense made it stick."

Donofrio was perched on the left side of the field when she one-timed the cross with her left foot.

"I was just trying to get it in the back of the net. It went the middle of the left side, just inside the post," Donofrio said. “Megan Graziano got me the pass. It feels amazing to score my first goal of the season and I'm hoping for more."

Graziano will be getting a lot of attention from opposing defenses this year, which will allow Mendham booters like Donofrio more opportunities to put the ball in the net.

"She has a lot of speed, a lot of energy," Lahey said. "She is a very coachable kid. She always wants to know what to do better and using her speed to get on the back end of that and keep it on frame was phenomenal."

With a goal in hand, the Minutemen were able to focus on making sure it stood up. Mendham has a young back four with juniors Lexie Naval, Nikki Pio, Erin Duffy and sophomore Katherine Grasso playing major roles and Sophia Farlekas and freshman Maddie Ryan subbing in. Naval and Pio played a lot together last year, while the other girls are still getting comfortable in their roles.

"In the beginning of the season, it is a little rough but we practice together every day," Pio said. "We spend so much time together that we become more comfortable."

However, having four-year varsity player Aubrey Egerter between the pipes makes the transition easier.

"Aubrey is a beast," Donofrio and Pio said simultaneously while laughing.

Pio also credits an early 3-0 loss against Scotch Plains-Fanwood for putting the Minutemen on the right track.

"We have come a long way in getting back and staying with our girls and protecting each other," Pio said. "Through our practices, we worked a lot on communicating. Even though we lost against Scotch Plains, it helped us to win this game."

Morris Knolls had some opportunities late but it was nothing the Mendham defense couldn’t handle.

"This was our best game this year by far," Lahey said. "We have been working on defensive shape and marking and communication. That has been among our weak spots in the first couple of games. Today, it all just came together. The girls communicated really well. They called out marks. We won a lot of balls in the midfield. It wasn’t anything specific other than the basics of the game and getting the team used to playing together."

Last modified onMonday, 16 September 2019 13:16
More in this category: « Bernardez, Knolls tack on another title Rams are ultra determined this season »