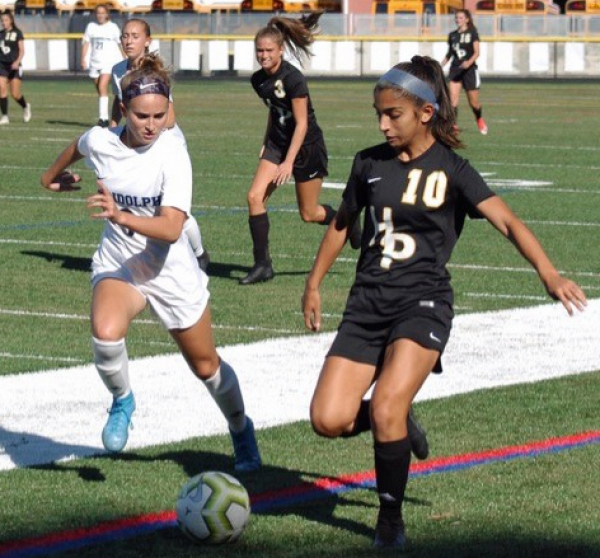 EAST HANOVER TWP.  _ The seniors on the Randolph girls soccer team are playing with an extra sense of determination this year.

The Rams have no hardware to show for their years of hard work. Building a 5-0-1 start, it’s obvious that Randolph is serious about its chances for winning a title this fall.

A 3-1 win over previously undefeated Hanover Park on on Tuesday, Sept. 17, was a prime example of Randolph’s determination.

Lauren Robles, Karen Hull and Julia Yan scored goals to spark the Rams' triumph. Grace Mochnal connected for the Hornets. The Rams are off to a fast start, knocking both Hanover Park and Chatham from the previously unbeaten ranks this week. Much credit goes to the 10 seniors who are aching for a title.

"We have been on this team for four years and have no titles to show for it," Robles said. "We need to make a presence. The sophomore and juniors are working to get on that level and were ready to go."

The Rams are feeling a sense of urgency in games as well as in the season. They have been working hard on shooting drills so that when they get chances to score they can make the most of them.

Hanover Park, another senior-laden team, battled well with Randolph for the first 14 minutes before the Rams took the lead. It was Robles, who took a feed from Hull before flashing some footwork against the Hornets defense and squeezing a shot off.

"It was a really great buildup," Robles said. "Karen got me the ball. I ran in from the right side and it was a left-footed shot. I was at the top of the box but I was in so around the 16. It was middle, it hit off the right bar and went right in."

"Our outside backs are really great at getting up the wings," Robles said. "Allysa and Becka sometimes step up into the midfield and are playing really good balls through. They are a big part of our attack."

Hull was able to make it 2-0 in the 27th minute. She maneuvered into the center of the penalty area and hammer home a score from around the 6-yard line.

"I remember going down the right side and cutting in," Hull said. "It bounced around the goalie's butt and legs and went in."

Hull said the opportunity to practice against standout goalkeeper Ellie Sciancelepore Is an extra benefit for all the Rams' scorers.

The Hornets got a goal back when Grace Mochnall knocked in a shot from the left side of the net with 2:56 left in the 40-minute half to make it 2-1 at halftime.

Hanover Park also had a scoring chance or two in the second half, but Yan’s score at the 45-minute mark gave Randolph breathing room. A team favorite, Yan’s goal gave the Rams a big emotional lift as well.

"She has great foot skills," Robles said of Yan. "She’s savvy on her feet. She is a finesse type of player. It’s fun when she scores because she gets the biggest grin on her face. She is a really mellow person outside of soccer so it is fun to see her when she gets excited."

That made it a two-goal game. It was enough for the Rams' defense, which has only surrendered three goals in six games.