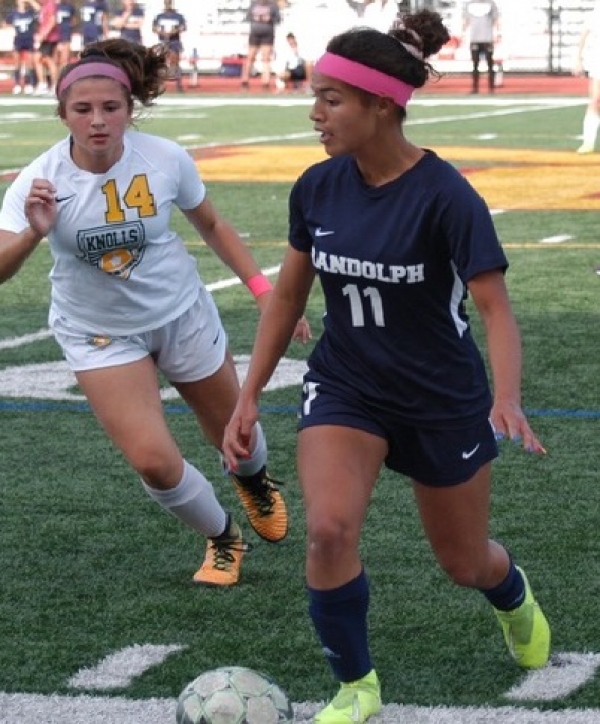 MOUNT OLIVE _ Ellie Sciancalepore jumped up and grabbed onto the center of the soccer goal crossbar and gave her long legs one last stretch. She knew she would need to take advantage of every inch of her body to get Randolph to the Morris County Tournament final.

The senior didn’t disappoint. She made three shootout saves and Randolph converted on two of their PK chances to defeat defending champion Morris Knolls 1-1 (2-0 shootout) in the MCT semifinals at Mount Olive High School on Saturday, Oct. 12. The top-seeded Rams will face Kinnelon, which edged Jefferson, also in penalty kicks 0-0 (4-1 in a shootout). The final is scheduled for a 7:30 p.m. start at Roxbury High School on Saturday, Oct. 19.

"Our team quote this year is ‘If you want something you never had, you have to do something you’ve never done,'" Sciancalepore said. "We’ve been in county semifinals so many times and we haven’t gotten the job done. Today, we have done something that we’ve never done before to get that county championship, something that means so much to us … especially the 10 seniors. It is something that we've wanted so badly over the years. Winning this game in such a fashion and getting to the finals is absolutely amazing."

A breakaway goal by Randolph’s Karen Hull helped the Rams establish a 1-0 advantage at 22:37 of the first half. However, fifth-seeded Morris Knolls had some opportunities and kept the pressure on. A foul in the penalty area gave the Golden Eagles a penalty-kick opportunity and Madison Palma buried it three minutes into the second half.

It was one of the few times that Palma was able to kick the ball without a swarm of Rams defenders surrounding her.

"We have four seniors on the backline and we can do anything with them," Sciancalepore said. "Palma is an amazing player and all props to her but we basically played her how we usually would."

Both teams had scoring opportunities in the two 10-minute overtime period as well but, again, it came down to a shootout. Randolph fell in a semifinal shootout last year, but Sciancalepore would not go for that outcome again.

"I have come to learn how to read them," she said. “I also encourage my team. I want to get them as pumped up as possible."

Goalkeepers look for tells in an opponent’s hips or legs to try and determine where they might be kicking. As for Sciancalepore, she’s not telling.

She guessed right to stop scoring opportunities by Palma and Presley Anderson. Against Anderson she had to stop her twice.

“The first time I stepped off my line a little early,’’ Sciancalepore said. “I just wasn’t focused on reaction. The second time, I knew she was going to go (to my) right based on how she approached the ball. I also knew she was probably going to stick with what she was confident in so I just reacted quick and followed it through."

Her Randolph teammates came through with a pair of scores. Claire Doto connected with a shoulder-high shot on the right side of the net to make it 1-0. Alyssa Alfieri followed by drilling her kick into the low left side to give the Rams a 2-0 advantage.

When Sciancalepore dove to her left to stop Morris Knolls kicker Carly Sharpe’s shot, that was all the Rams needed to advance. To win a title, they will have to do a little bit more.

“It’s amazing," Petrucelli said. “None of us on this team have ever made it that far. We are so grateful. We are just going to step on the field and play no matter who it is."

Both teams had opportunities to score in the first 100 minutes. The Colts controlled the tempo but the Falcons' defense was surprisingly tough.

“We had more clear-cut chances.’’ Kinnelon coach Nick Stokes said. “They had more corners. I’m not surprised it went the way that it did. Jefferson is a good team defensively and they are tough to break down."

However, the Colts, despite their seeding, have not flinched against higher-ranked and more physical opponents.

“They have been confident the whole way through in terms of coming into the game and knowing they could win," Stokes said.

The Colts' defense was able to limit the Falcons’ ability to distribute the ball on offense, but they were unlucky in their own scoring opportunities. In the shootout, Petrucelli had already had a winning shootout experience when Kinnelon defeated West Morris in the opening-round game.

“On a PK, I guess which side they are going to and then I give everything I have to get to that side,’’ she said. “Twice today, I got lucky and I was able to make the save."