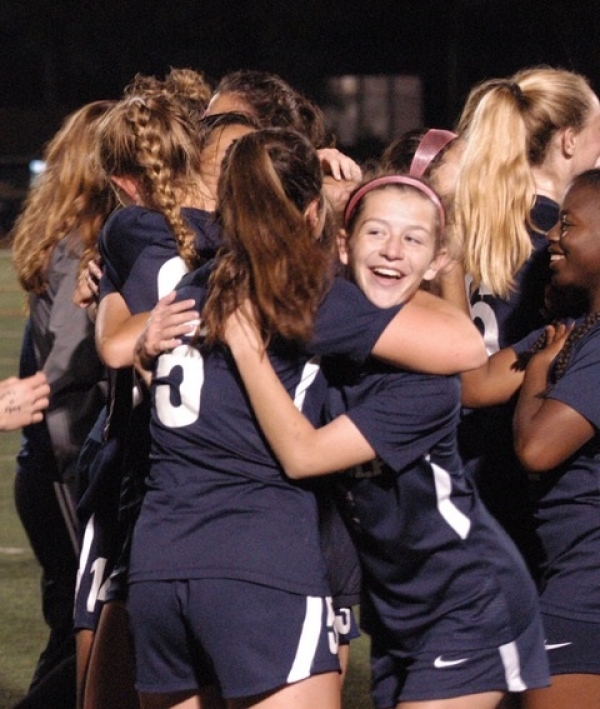 Photos by Mark Kitchin The Rams are all smiles as they embrace and celebrate their MCT title.
Rate this item
(2 votes)
Tweet

ROXBURY _ There were 15 seconds left in the game and Randolph goalkeeper Ellie Sciancalepore could see Kinnelon’s one last chance at tying the Morris County Tournament championship game coming straight at her.

When she snatched the ball out of mid-air, the senior keeper knew the title belonged to the Rams.

Top-seeded Randolph captured its 14th overall title in school history and first one outright since 2011 with a 1-0 victory over upstart Kinnelon in the title contest held at Roxbury High School on Saturday, Oct. 19.

Sciancalepore made four saves, including the pressure-packed last one for the Rams. The winning goal was an own goal that occurred when a Kinnelon defender accidentally headed a Randolph cross into her own net.

Goalkeeper Emily Petrucelli made four saves for Kinnelon. The 13th-seeded Colts put up a brave fight and had a chance to win right to the very last shot.

"It’s a rush going up there and having that girl kind of back off so I could grab it," Sciancalepore, the game's MVP, said. "I knew it. In the bag. I just had to hold it a few seconds and punt it. There is no way they are coming back at me. It is unbelievable. It is indescribable."

Randolph defender Becca D’Egidio can attest to all of the feelings all of the Rams were experiencing.

"We’ve been working for this for so long," D’Egidio said. "This is a goal of ours from the beginning of the season and the seniors since our freshman year. Finally... To get it done is just so refreshing and rewarding."

But it wasn’t easy. Although Kinnelon was the 13th seed, it had not lost since its bizarre 5-1 defeat against Mountain Lakes on Sept. 10 and they had a 12-game unbeaten streak going into the contest.

During the first half, the Colts had their share of possessions and an occasional flurry at the net which forced the Rams to make adjustments at half.

"We had to change our formation based on Kinnelon’s play," D’Egidio said. "They are a very direct team and they were just playing it long. They have pretty speedy forwards up top. It was a really big challenge for our defenders to defend. We had to change up our tactics and our formation to deal with that."

The winning goal came when Randolph's Kiara Iannacone attempted a cross. It went way wide of the mark. Instead of letting it go, a Kinnelon defender put her head on it and the ball bounced wildly into the net.

"It was a beautiful feeling just rushing over you (when we scored)," Sciancalepore said. " knew that we had a game ahead of us. We knew that they could come back at any time. They had their opportunities. Thank God our defense and our midfielders came back and stopped them."

There was also some drama late. When a Kinnelon defender took out a Rams forward with a rough tackle, Lauren Robles got into the face of one of the referees and was red-carded. The Rams would be one player short for the final eight minutes. Fortunately for Randolph, it could tactically play back on defense and clear out some of the more dangerous threats.

"I couldn’t be happier with the girls," D’Egidio said. "I told them before the game that we got the No. 1 seed for a reason. We have to go out and show everyone that we deserved to win this. We worked so hard. We spent hours watching film, hours doing extra training, coming in doing the extra stuff to give us that edge. It has rewarded us this season."