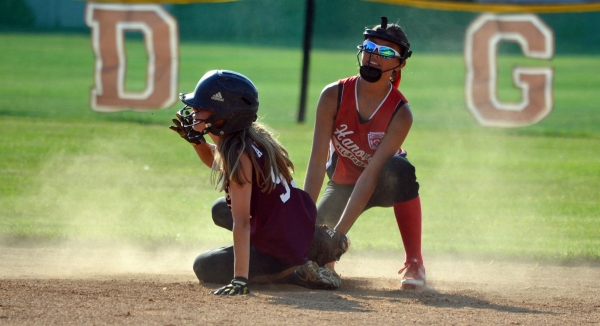 Photos by Sandy Seegers Hanover shortstop Brynn Yacat applies the tag at second base in the second game of the Section 1 Little League Softball Tournament.
Rate this item
(0 votes)
Tweet

RIDGEWOOD _ Outside pitches hold no appeal for Hanover's Megan Gilbert.

So when the first few offerings by Ridgewood pitcher Olivia Stoehr were wide, Gilbert figured she had no choice.

"Go for it," she told herself.

Gilbert, the third baseman fond of pitches low and a little inside, extended her arms and made contact, driving in Hanover's second run in the first inning. The hits kept coming for Hanover, which blanked Ridgewood 11-0 in its second game at the Section 1 Little League Softball Tournament on Wednesday, July 6.

"Everything was outside," said Gilbert, who picked up another RBI with a sacrifice fly in the third inning. "For some reason, everyone knows I don't like outside pitches. I had to try and get it."

Katie Brunner (2 for 3, 3 runs scored) crossed the plate with Hanover's first run. Brunner was knocked in by Julia Swan.

The shutout vaulted the Hanover 12s into the Section 1 final, which is set for Saturday, July 9 at 1 p.m. at Veterans Field in Ridgewood. Hanover (2-0) will face the winner of Friday's losers' bracket game between Ridgewood and Pequannock.

"I'm excited about it," Brunner said. "I'm nervous, too. We made it so far. It would be sad to have our journey end in this tournament."

It's evident that Hanover is intent on gaining a berth in the state tournament. Swan had another exceptional all-around outing, striking out 11 in five innings and finishing with three RBIs. Hanover backed Swan with a 12-hit attack and solid defense. Brunner, the catcher, threw out a runner attempting to steal second.

"This group of girls has been together for three years between Hanover Rec and All-Stars," manager Maria Mess said. "They feed off each other and bring each other up."

Victoria Sheridan, the No. 3 batter, did her part for East Hanover, rapping out a pair of hits and driving in a run.

"We stepped up our hitting," Mess said. "We've worked hard on it. You can see it in the runs the girls are driving in."

Brunner, who came close to cutting down another runner in Hanover's 7-2 win over Pequannock on Tuesday night, got the final out of the third inning with an on-target throw to second.

"I'm just trying to catch the pitch," Brunner said. "Out of the corner of my eye, I see the runner. I always want to make the throw."

According to Gilbert, soon to be in seventh grade at Memorial Junior High School, all the incentive Hanover needed was provided by a loss to Robbinsville in the state tournament final as 9-10s.

"Losing was awful," Gilbert said. "We were so upset. We've really always wanted to get back to the state tournament."