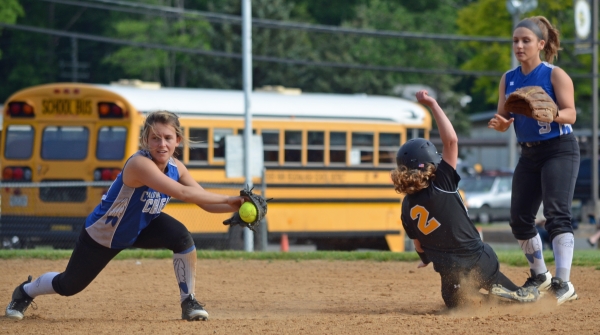 EAST HANOVER _ Prior to the season, Hanover Park coach Jamie Galioto had a conversation with Nikkiann Giaimo and requested that the senior catcher focus primarily on defense.

"I told Nikkiann that whatever we got offensively was fine," Galioto said. "We need her for defense. I didn't want her worrying about anything else."

Giaimo adhered to the plan, of course. She wasn't exactly laidback when at the plate. She simply didn't pressure herself.

On Wednesday, May 24, Giaimo had a stellar day in the batter's box, rapping out two hits and driving in four runs to pace a 12-hit attack when the top-seeded Hornets defeated Caldwell 9-1 in a North Jersey Section 2, Group II semifinal.

The victory vaults Hanover Park (23-3) into the sectional final for the first time since 2013. The Hornets will play host to Hackettstown, which ousted second-seeded Parsippany, on Tuesday, May 30 in the title game. Four years ago, Hanover Park made it all the way to the group finals, falling to Robbinsville, 3-1.

"I'm very happy," Galioto said. "Caldwell is a great program. They're well coached. We knew it'd be a tough game. Caldwell feeds off of energy. If we got on them early, the game was ours."

Giaimo and her teammates remembered their coach's words and produced three runs over the first two innings. Amanda Bermel had a one-out bunt single before Amy Petrovich doubled. Nicole Miller walked to load the bases. Giaimo knocked in the first two runs with a single. The lead went to 3-0 in the second on Aryana Galioto's base hit.

Caldwell (14-9) made it 3-1 in the top of the third on a groundout by Christina Guarino. Hanover Park got four runs in the bottom of the fifth with two outs. Giaimo was clutch again, plating a pair of runs by singling off a 3-1 pitch. Jess Miller, the winning pitcher, helped her own cause, taking a first-pitch offering and depositing over the fence in left field. The two-run shot was Miller's sixth homer of the season and put Hanover Park up, 7-1.

"The ball felt nice coming off of the bat," Jess Miller said of the home run. "Sometimes, it doesn't feel as good. I saw it going. Our coach was excited. I got a high five and got to keep going."

After putting down Caldwell 1-2-3 in the top half of the sixth, the Hornets, who have won 12 of their last 13 games, posted two more runs on a Petrovich groundout and a passed ball. Miller then retired the Chiefs in order in the seventh.

"We're really excited about being in the final," said Petrovich, who got her 100th hit versus Roselle Park 12 days ago. "We haven't made it in awhile."

Giaimo, naturally, was pleased with the damage she did with her bat.

"Coach G told me to hover over the plate and just drive it," Giaimo said.

Galioto praised her for her devotion to strong "D" yet was certainly glad to see her contribute with so much on the line.

"Whatever we're getting from Nikkiann now is gravy," he said. "She's come around and is driving the ball. Now the sky is the limit."

Jess Miller's main objective was to keep Guarino, who also notched her 100th career hit this spring, from getting on base. Guarino went hitless, flying out to center field, grounding out and drawing a walk.

"(Guarino) had one RBI in most of the games they won," noted Jess Miller, adept at moving the ball around and working the outside. "If she didn't drive in a run, they'd lose. If we could hold her off, we'd do OK."

Petrovich, a junior second baseman, has had a hit in every game but three this season. However, the march to 100 hits was a bit trying.

"I had some trouble getting there," she said. "I felt the pressure."

Next in Petrovich's sights is 150 hits. The goal is a lofty one but she said she'll "wait and see."

Routine and a bit of superstition have played a role in Hanover Park's success. For example, Galioto always parks in spot No. 011 near the junior varsity field and wears a black shirt with gold cargo shorts.

"I like to do the exact same things," Galioto said.

As do the players. According to Petrovich, the Hornets, following Galioto's lead, have become creatures of habit.

"We live on routine," Petrovich said. "We do the same warmup, say the same things. On slap defense, I joke with Jess. All of our infielders wear hats."

Hanover Park anticipated a showdown with Parsippany, which it split with, prevailing, 8-7, and losing, 9-4. They had much scouting information on the Red Hawks.

"I know our coach wanted Parsippany," Miller said. "We'll got at it and see what happens. I think we're the team to take it all."

***PLEASE CHECK BACK FOR PHOTO GALLERY***