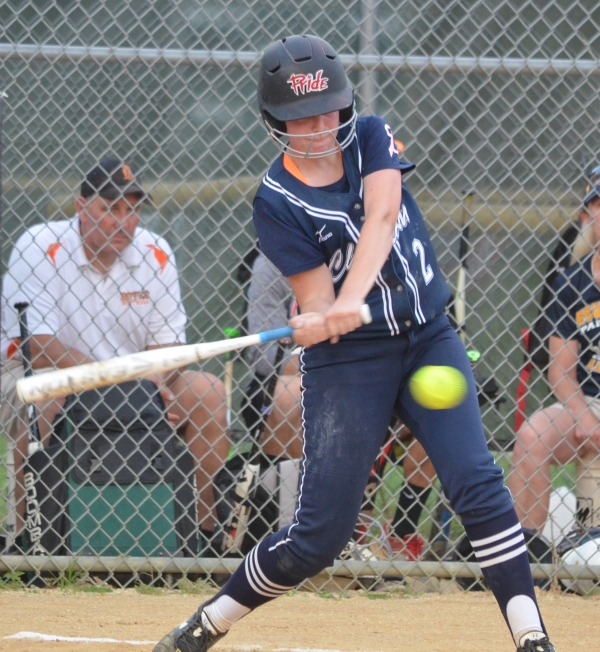 MONTVILLE _ When Montville pitcher Jordan Strickland suffered a severe ankle sprain in the second game of the season, Kristie Monaco was called upon to take over in the circle and didn't object.

As it turned out, Strickland never returned and Monaco, an outfielder, kept firing pitches. That's why Mustangs coach John Immediato considered Monaco, a four-year starter, the "backbone of the team."

The adaptable and versatile Monaco made her exit from softball on Tuesday, June 13, the date of the Morris County Senior Softball All-Star Game. Monaco, headed to Seton Hall University, will not play in college so the all-star game at Municipal Fields was her finale.

"I'm done. This is it," said Monaco, a member of the Gold Team which triumphed 5-1 over the Blue Team. "I'm a little sad. I guess I really wish it would never end but, at some point, it has to."

Monaco bid farewell to the sport she has played since she was 8 years old by going 1 for 2. She was not called upon to pitch but that was OK.

"I had a nice time tonight," Monaco said. "The game was fun and I got to meet players from other teams. Everyone was so nice and welcoming. This was a good ending. I got a hit, made some plays in the outfield and met new people."

Although Monaco seems fine with her "retirement," Immediato has a large hole to fill. Not only did Monaco compile an 11-7 pitching record, she batted .450.

"Kristie took on all of the pitching duties after Jordan got hurt," he said. "She battled little injuries of her own, including an issue with her shoulder, but gave it all she had."

Whippany Park's Emily Sanchelli, on the Blue Team, also has opted not to don a uniform in college.

In Sanchelli's family, softball has been at the forefront. Her aunt, Karen, earned All-America honors at the University of South Carolina and represented the United States several times in international competition after graduating from Whippany Park High School. Her father, Frank, brother Frankie and sister Gabby played, too, as did several of her cousins. One of her uncles was involved with softball, too, as a coach.

"My family is really into softball," said Sanchelli, whose next stop is Kean. "I'm definitely going to miss it. I liked coming out after school to be with the team. I love the competition."

Sanchelli's high school career began at Mount St. Dominic. She had to sit out part of her sophomore year after transferring back to Whippany Park then started at third base for two seasons.

She made perhaps the most heads-up play of the Morris County Senior All-Star Game, tagging a runner caught in a rundown between second and third base before throwing to first to nab another overly aggressive runner. Sanchelli added a hit in the seventh inning.

"It was really interesting to play with people from different schools," Sanchelli said. "I'm happy I was chosen. It's nice to end it like this."

For Parsippany's Sarah Waffenfeld, the game afforded her another chance to catch for teammate Caitlin Brennan. Waffenfeld and Brennan were on the Blue Team, which scored its lone run on an error.

"It's so exciting," Waffenfeld said. "The seniors are getting mentioned. I might play club softball at Montclair State. I'm not sure. I've played since T-Ball. I knew stopping would be hard and it is."