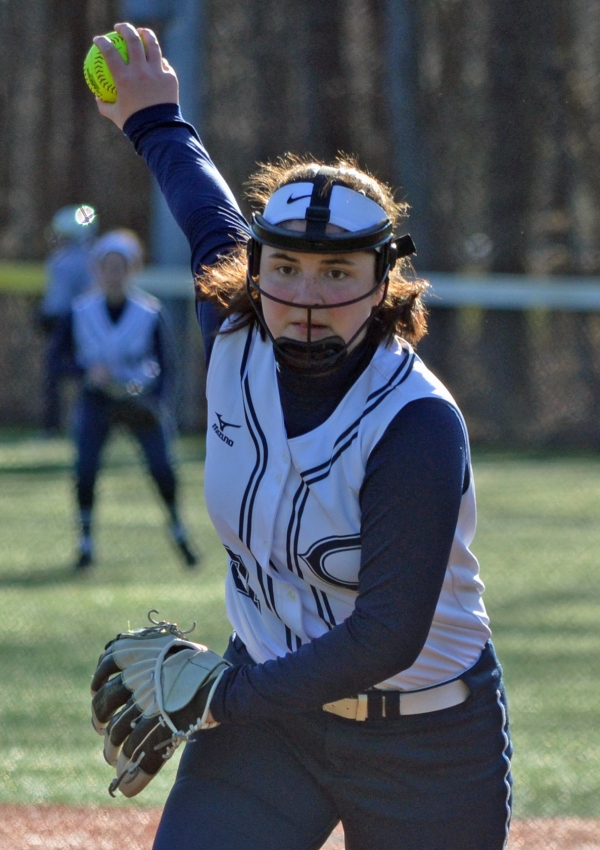 CHATHAM _ Sarah McCabe isn't known for burning up the basepaths.

So, when Chatham needed to score to snap a deadlock late in a game against Jefferson, McCabe, a junior first baseman, relied on other extremely valuable attributes to score what proved to be the decisive run in a 3-2 victory over Jefferson on Wednesday, April 4.

McCabe used a combination of determination and desire to score from third base on Kaitlin Pinaire's groundball in the bottom half of the sixth inning.

"My coach told me I'd be going on any groundball except one to the pitcher," McCabe said. "I had to be aggressive."

McCabe, who can now add fearless to her list of talents, headed home when the ball was hit toward third and slid in, just beating the tag.

"In that situation, we had a contact play on," Cougars coach Brian Figueiredo said. "We wanted to make them make a play. The third baseman obviously had to field the ball and throw it down the line with the runner going home. Jefferson had wrested momentum from us in the top of the inning. Sarah just went in there hard and scored."

The Falcons had evened the score, 2-2, when a ball hit to the outfield was dropped, allowing both runs to score. Katie DeBell hit the ball, which traveled a long way, considering the ball was blowing in at Shunpike Field. Prior to that, Aly Hine doubled to right-center field with two outs to get things going. The double, off a full-count offering, was her second of the game and the 100th of her career. An error ensued, putting runners on first and third.

"We didn't get down when they scored the two runs," said Anna Lengner, Chatham's junior pitcher. "We were hitting pretty well. I thought we could come back. Sarah's a smart baserunner. She knew what to do."

Lengner had a solid outing, allowing five hits and striking out nine. She relied heavily on her curveball which induced groundballs and strikes. The brisk winds that blew in toward homeplate, she said, actually worked in her favor.

"I think it helped me and the defense," Lengner said. "The ball really didn't go very far."

Figueiredo agreed. Of course, Jefferson dealt with the same conditions.

"We talked about the wind when we got here," he said. "Someone would have to crush the ball to get it over someone's head. Anna did a good job with it."

Chatham scored its first two runs in the third inning. Lengner and Julia Yukniewicz each had an RBI single with two outs.

"It's an old saying but it's true that two-out hits win games," Figueiredo said. "It may be cliche. I probably say it five or six times per game. To do that is enormous for us."

The Cougars got in more early season games than most teams thanks to turf fields in town. In addition to Shunpike, they played at Lum Avenue Fields.

As of April 10, Chatham was 6-1. The Cougars won their first six games before falling to Mendham, 3-1.

Hine was the only player to get two hits in the game. She hoped to reach the milestone last season but it didn't happen.

"I'm relieved honestly," Hine said. "I was putting a lot of pressure on myself. I'm relaxed and comfortable now. I've got a new mindset."

View the embedded image gallery online at:
https://soar-nj.com/sports/softball/item/1504-chatham-vs-jeff-hines-100th#sigProId31b95bc6b0
More in this category: « Morris All-Stars have one last chance to shine Young MK blanked by Robbinsville »