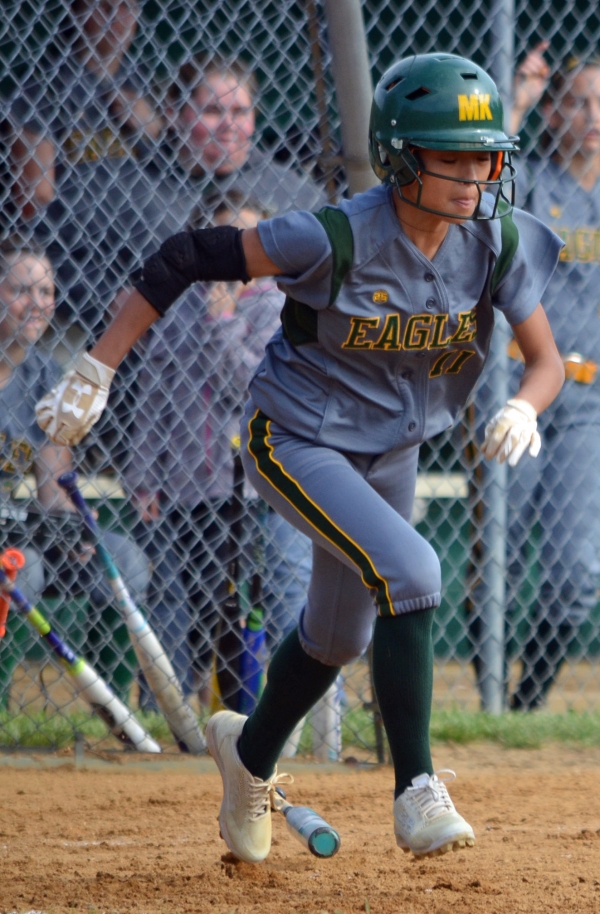 Although coming out on the short end, the Golden Eagles are a work in progress and should make strides as the spring season advances on to late April and then tournament time in May.

Robbinsville, the defending Group II state champion, earned an 11-0 six-inning decision over Morris Knolls at the Anthony LaRezza Invitational. The loss dropped Morris Knolls to 0-2 after a 6-4 loss to Roxbury on Friday.

In other games at the tournament, Montgomery rallied from a 1-0 deficit with six runs in the top of the seventh inning to surprise host and defending Tournament of Champions winner IHA, 6-1. Robbinsville defeated West Essex 19-0 in four innings and Cranford turned back Saddle Brook, 11-2. On Sunday, April 7, St. John Vianney rolled past Cedar Grove, 10-1, Middletown North edged Cedar Grove, 2-1, St. Joseph of Trumbull, Ct. beat Newark Academy, 8-3 and Donovan Catholic of Toms River pushed past IHA, 10-0, in five innings.

Morris Knolls, which had four sophomores and three freshmen in its starting lineup, was held to six hits by the Ravens' quality combination of senior right-hander Kate Hunter and junior MacKenzie Medders in the circle. Hunter, headed to play at Queens University in Charlotte, N.C., threw four innings, allowing four hits, striking out six and walking none. Medders, a left-hander who pitched Robbinsville to the 12-year-old Little League Softball World Series in 2014, went the final two innings, giving up two hits, striking out three and walking none.

Robbinsville (3-0), with six juniors, three seniors and one freshman in its starting lineup, got on the scoreboard in the first inning with a two-run home run over the fence in left-center field by junior first baseman Olivia Moser. The Ravens added three runs in the second to make it 5-0 aided by an RBI double from junior Shea Walsh (3 for 4, 2 runs scored, stolen base). Moser's sacrifice fly for an RBI helped propel a four-run fourth to make it 9-0 and an RBI grounder from junior Devon Witt (2 for 4, double) and a run-scoring single from junior Alyssa Whitman provided the final two Robbinsville runs in the top of the sixth. Junior second baseman Chelsea Manto (Hofstra) went 2-for-3 with two runs scored, an RBI, a walk and a stolen base for the Ravens.

"Like I told the girls after the game, this is a marathon, not a sprint," said Morris Knolls coach Keith Heinemann. "We struggled a bit today but we definitely have the ability to bounce back. I think we will be a resilient team."

Heinemann, in his 11th season at the Golden Eagles helm, has compiled a 222-61 career mark going into the team's Northwest Jersey Athletic Conference game against Lenape Valley. During his tenure that began in 2008, Morris Knolls has won five Morris County Tournament championships, four North Jersey Section 1, Group IV championships and the overall Group IV state crown in 2010 when the Golden Eagles defeated Eastern, 4-3, in the final. Morris Knolls also won the last two NJAC National Division championships with 8-0 league records in both 2016 and 2017.

Robbinsville has won the Central Jersey Group II title six of the last seven seasons and the overall Group II championship three of the last seven seasons (2011, 2013, 2017). The Ravens have won four of the last seven Mercer County Tournament championships, including the last two in a row under third-year coach Lisa Rich, whose team is 3-0 this season and 46-10 since her first season in 2016. The Ravens lost, 2-1, to Group 1 champion Cedar Grove, in the TOC's first round last season before Cedar Grove was defeated by eventual champion IHA, 3-0, in the TOC semifinals.

The tournament was played in honor of LaRezza, the former coach at the Bergen County school, who passed in early February, 2016 at the age of 50 after a battle with tongue cancer. An assistant at IHA beginning in 1998, LaRezza took over the head duties in 2005, helping the Blue Eagles to Non-Public A state championships in 2009, 2012 and 2015.

LaRezza's teams won four Bergen County Tournament crowns, becoming only the second coach to earn three straight BCT titles. He had 338 career wins, 20th on the all-time Bergen/Passaic coaching list, at the time of his death and was a beloved figure both on and off the field by his players, fellow coaches and others who came into contact with him. Also a Newark firefighter, LaRezza was co-founder of the New Jersey Pride summer softball organization and team and also president of Akadema Elite.