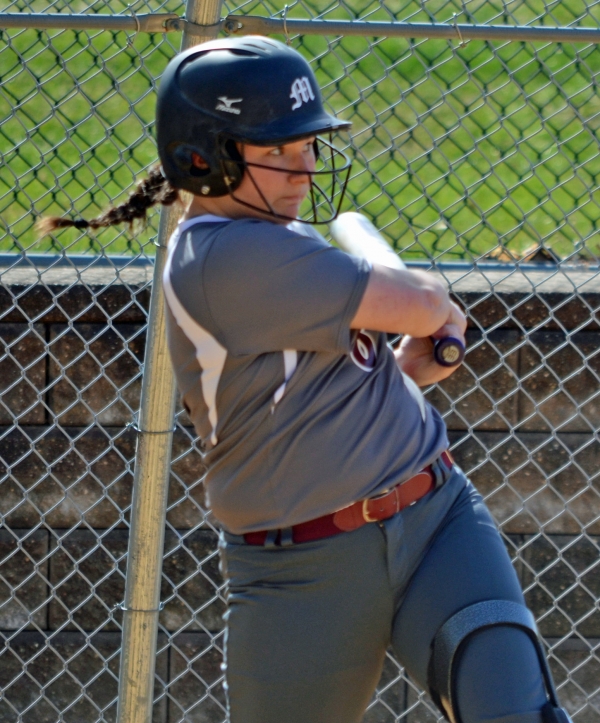 Photos by Sandy Seegers Tatum Mullins hits the double that snapped a 3-3 deadlock and lifted Morristown to a 4-3 MCT win over Whippany Park.
Rate this item
(7 votes)
Tweet

MORRISTOWN _ For the last week, Morristown center fielder Tatum Mullins has been in softball bliss.

Mullins returned to the softball diamond this spring after undergoing what every athlete dreads - knee surgery - and has been working her way back into form.

On Saturday, April 21, Mullins capped an exceptional week with a game-winning double in the bottom of the seventh inning in Morris County Tournament preliminary-round action, lifting the 15th-seeded Colonials over No. 18 Whippany Park, 4-3, at Frelinghuysen Middle School.

"There was a lot of pressure being at bat in that situation even though there were no outs," said Mullins, the cleanup batter. "Once I hit the ball, I knew and I got excited."

Runners were on first and second when Mullins, who tore her ACL during a New Jersey Fight game last summer, stepped to the plate. She let the first pitch, a ball, go by before sending the second pitch to left field. Within seconds, her Morristown teammates were on their feet and waiting to congratulate her.

"When I talked to Tatum before she went to bat, I said 'Let's get this done,'" Colonials coach Bob Bruno said. "She had just missed a few innings before."

The "miss" Bruno was referring to was a line drive she hit to third base for the second out of the fifth inning. Wildcats third baseman Paige Walsh made a great play, denying Mullins her second hit of the game. She singled in Morristown's three-run first inning, too, so it was the second time she had multiple hits in the last three games. During that stretch, she went 5 for 8, including a double and a triple, and walked once.

With each game, Mullins, her left knee protected by a bulky brace, gains more confidence. She was the recipient of the game ball for her clutch hit and planned to put it on the shelf above her dresser.

"I was a little nervous coming back after the surgery," Mullins said. "I'm getting better. I'm playing the best I've played all season. I'm proud of myself."

The knee brace can be cumbersome but Mullins tries not to think about it. Otherwise, she feels "it would restrict my playing."

Bruno is pleased with Mullins' progress and put her in a category with Mary Carroll Smith, whom was a standout at Mount St. Dominic and Seton Hall University.

"I've seen only one better outfielder in my 40 years coaching," Bruno said. "That was Mary Carroll Smith. Tatum is tremendous and she's worked hard to become a better hitter. Her shoulder has been bothering her, too, but she never complains."

If there was another game ball to award, it likely would have gone to pitcher Molly Murphy, who held Whippany Park to three hits. Murphy struck out four and walked one. She helped her cause by slugging an RBI double in the first inning. Chloe Saia also had a solid game, rapping out two hits and knocking in a run for the Colonials (5-3).

Whippany Park scored three runs in the top of the seventh inning to knot the score, 3-3. With two outs, Alexa Malet laced a two-run single down the right-field line. A run-producing triple to right field by Walsh ensued.

"I was hoping someone would drive a ball," Wildcats coach Todd Callaghan said. "We needed to find some gaps. We've been too inconsistent. A bad inning here or there. We're trying to get to the point where it doesn't affect us too much. It's still a work in progress."

The late comeback by Whippany Park had some of the Colonials, who will face second-seeded Chatham in the first round, on edge. However, Mullins and her teammates were determined to prevail.

"We didn't want to get too down after Whippany Park scored," Mullins said. "We had to keep our energy up and stay positive. If one head goes down, everyone's goes down."

She considered her decisive double "kind of fun" yet felt Morristown could have put up more runs earlier. The Colonials loaded the bases in the second inning and left eight runners stranded.

"It shouldn't have come to that," Mullen said. "We should have done better at the beginning of the game. If we did, we wouldn't have been in this situation."