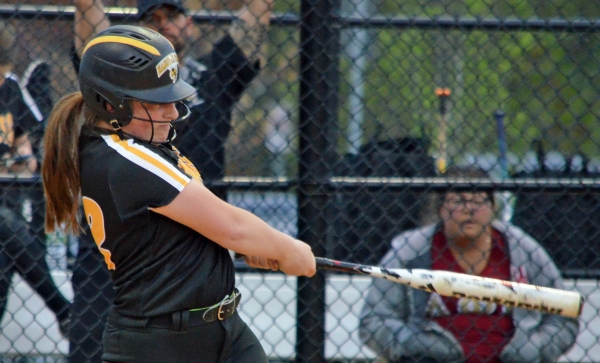 Photos by Maryann Harlow Jess Miller belted two home runs and singled for Hanover Park in its 21-1 win over Parsippany in MCT semifinal action on Saturday, May 5.
Rate this item
(9 votes)
Tweet

"I'd be terrified to be in this position as a freshman," Miller said of Devens, Parsippany's first-year pitcher who was making her debut in the Morris County Tournament semifinals. "It's a lot. I felt bad. I guess we all have our days."

Although it wasn't Devens' day, the MCT semi was certainly one to remember for Miller, who had three hits, including two home runs, and fired a four-hitter to highlight Hanover Park's surprising 21-1 win over top-seeded and defending champion Parsippany on Saturday, May 5 at Landing Park.

Miller's first hit, a single to left-center field in the first inning, was the 100th of her career. And, the evening only got better as she slugged home runs to left field in the second and fourth innings. She had hoped to reach the milestone against Morristown-Beard on Thursday but went hitless in two at-bats. She said she didn't see the ball well and may have been overanxious.

"I had 99 hits and I knew it," Miller said. "That made it a little nervewracking. Seeing everyone get on raised my spirits. It was definitely nice to get my 100th hit."

Never had Miller had two homers in a game. She said the rarity led her to feel "euphoria and so much happiness."

The fifth-seeded Hornets racked up five runs in the first inning as 11 players took their turns in the batter's box. A bases-loaded walk and an error gave Hanover Park its first two runs. A wild pitch and a hit batsman accounted for two more runs. No doubt, Devens, was off and likely nervous. Miller took note.

"I saw that the strike one was pretty tight," said Miller, who finished with two strikeouts and was backed by errorless defense. "I needed to be careful and hit my spots."

The 21 runs Hanover Park scored over five innings were astounding considering it was beaten by the Red Hawks, 6-4, in an NJAC-Liberty Division game earlier this season. Parsippany led, 6-0, in the middle of the fifth inning in that matchup. Hanover Park pushed across all of its runs in the bottom of the fifth and lost, 6-4.

"I know every one of our girls, one through nine, can hit," Hornets coach Jamie Galioto said. "Everyone can play well. I just told them to enjoy the night and the atmosphere. I wanted them to have the time of their lives, be very loose and to play ball."

The third and fifth innings were big ones for Hanover Park, slated to take on Mount Olive in Wednesday's MCT final, also at Landing Park, at 7 p.m. Amy Petrovich's two-run single highlighted the six-run third. The fifth featured Aryana Galioto's triple to center field which knocked in two runs.

Several players had multiple hits and/or RBIs for the Hornets. Nicole Miller, who bats in the fourth spot, had three hits, a walk and four RBIs. Dara DiMaiolo had two hits and drove in two runs. Victoria LoPinto contributed a hit and two RBIs. Gianna Tito added two hits and two RBIs.

Parsippany's lone run was scored on Gabby Gennarelli's sacrifice fly in the third inning. Claudia Bennett led off that inning with a double and scored on the sac fly. A 4-6-3 double play ended the inning and squashed further opportunities. Miller and Hanover Park put down the side in order in the fourth and fifth innings.

Julia Vincent had two hits and a stolen base for Parsippany, which will meet Hanover Park again on Monday, May 7 in a key conference game.

"Hanover Park is a well-coached and well-prepared team with a lot of ability and they were clicking on all cylinders," Parsippany coach Greg Cleary said. "We are obviously capable of playing a lot better than we did and we have a few more weeks to make that happen."

In the final, the Hornets (16-5) will be looking to break a lengthy spell without a title. Hanover Park captured its only MCT championships in 1978 and 1979 under Edie Stitt.

"We'll keep working hard," Miller said. "We can pull it out. We need just one more run than the other team."