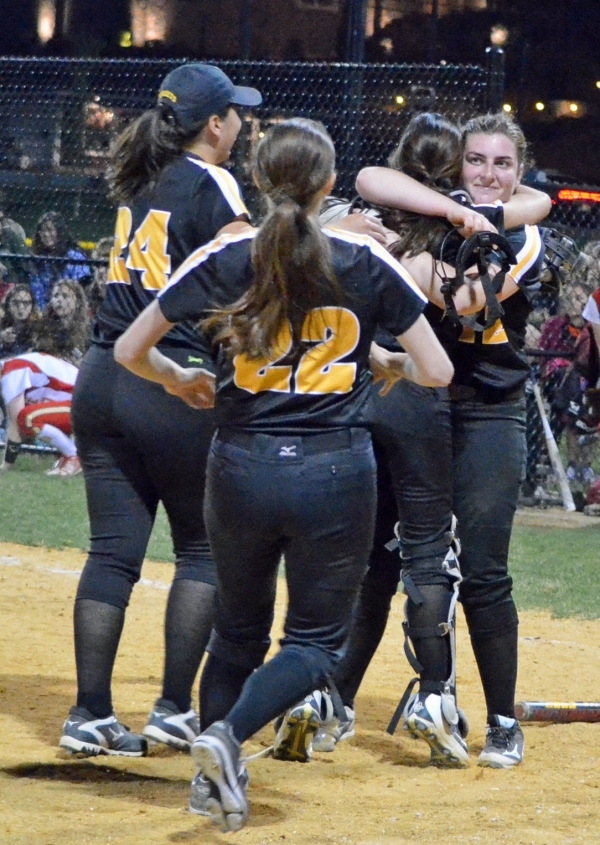 Photos by Maryann Harlow The Hornets rush to pitcher Jessica Miller after she made the final out of the MCT final.
Rate this item
(11 votes)
Tweet

ROXBURY _ Hanover Park pitcher Jessica Miller squeezed the popup in her mitt, exhaled and spiked the ball into the infield dirt.

Finally, it was over.

Miller's stomach turned many times in the top of the seventh inning when Mount Olive cut into the Hornets' once-substantial lead. Eleven batters took their turns at the plate. Five runs scored but fifth-seeded Hanover Park held on for a 9-7 victory over the sixth-seeded Marauders at Landing Park to garner their first Morris County Tournament title in 39 years.

"All of the frustration and excitement just came out," said Miller of the celebratory spike. "I was sick to my stomach. Very nervous. That was a long inning."

It certainly was. Mount Olive, motivated after being called for interference with the bases loaded and two outs in the fifth inning, played with a vengeance the rest of the way. Down 9-2 going into the top of the seventh, Kaitlin Pettenger lashed an RBI double. Two errant throws enabled two runs to score. A bases-loaded walk by the typically composed and under control Miller made it 9-6. Alyssa Segnello added a run-producing base hit.

"Even if they tied us, we still had the chance to go up and hit," said Miller, who took MVP honors. "We had to buckle down and get the outs. We did it and now we can look up and see 2018 next to 1979 on the banner in the gym. This is very, very exciting."

Jamie Galioto attributed the shaky conclusion to his squad's youth. Miller and Amy Petrovich, the second baseman, are the only seniors in the starting lineup. The seven others are sophomores. When Galioto went out to talk to his players in the seventh inning, he told them they "were going down as some of the greatest in Hanover Park history."

"I wanted them to get the last out and cement it," Galioto said. "They're a great collection of athletes. They just had to get it done. We knew we may have an inning like this. Things happen. Fortunately, we have Amy to calm everyone and Jess to make the pitches."

Miller hasn't only been effective in the circle. She doubled to left-center field to open the second for Hanover Park. After a sac hunt by Dara DiMaiolo, Miller scored on Gianna Tito’s fielder’s choice. Mount Olive tied it in the top of the third on an infield error.

"I was looking for a certain pitch and I got one right down the middle," DiMaiolo said. "It was a little low. It was right there."

The Hornets sent their lead to 9-1 in the fourth on three hits, two errors and a wild pitch. Nicole Miller and Victoria Lupo drove in runs with base hits. If not for sliding catches by Alyssa Segnello and Julia Chang in the shallow outfield, the Hornets would’ve had more base runners.

Some of Hanover Park's offensive prowess comes from hitting in the dark with the lights off. The Hornets hit baseballs instead of softballs. This is all in preparation for night games.

On the way out of the gym after their last hitting session, the Hanover Park players found a dead hornet on the floor. They named it Hillary, put it in a cup and brought it to the MCT final. Forty minutes after the end of the championship game, Galioto and the Hornets took the insect out to the infield and buried it.

"We bury our dead like on the Walking Dead," Galioto said. "It'll be there for future trips to this field."

DiMaiolo was thrilled by the MCT title. Postgame, the Hornets posed for photos and huddled with several members of the Mount Olive team.

"We choked a little bit at the end," DiMaiolo said. "We got tense. We had to find a way to win. Many of us have been together since travel ball. Once we got the lead, we had to keep going. It's never done. It's never over."

That was evident in Hanover Park's first-round MCT game versus Madison. The Hornets trailed 6-3 going into the seventh inning but put across four runs in the top of the seventh to advance. Had they not come through, there would have been no MCT crown.

"That was stressful, too," Jessica Miller recalled. "We got the momentum. We didn't want it to go to the very last inning."