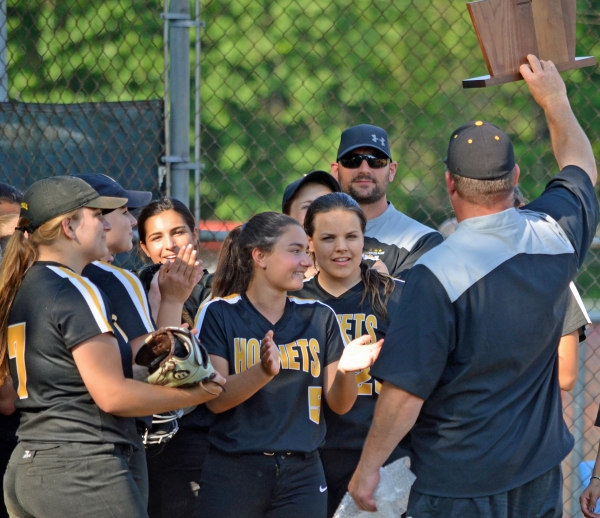 Photos by Sandy Seegers Hanover Park coach Jamie Galioto shows the trophy to his team after it defeated Parsippany for the sectional title.
Rate this item
(9 votes)
Tweet

PARSIPPANY _ It was another joyous moment in the history of the Hanover Park softball program when it defeated Parsippany 12-5 for the North Jersey Section 2, Group II title.

The Hornets had a subdued celebration then went to right field to discuss what previously had been prohibited: The fact that their Group II semifinal against Ramsey, slated for 7 p.m. on Thursday, May 31 at Seton Hall University, would start at the same time as the prom.

"We haven't mentioned it once because it would have been a distraction," Hanover Park coach Jamie Galioto said. "We knew when the next game was if we won. That's why we had the pow wow afterward. The prom's been the pink elephant in the room. There are some girls who have a decision to make. They have to decide and live with it. Those decisions will be respected. It'll be a learning experience for everyone."

Five girls - senior four-year starters Amy Petrovich and Jess Miller and three underclassmen - have to choose between the big dance and the game that could earn them a berth in the state final. Petrovich, the second baseman, already had her mind made up. She's foregoing the prom and putting on her No. 55 jersey.

"I'm here for the team," said Petrovich, who had two RBIs in the most recent victory over the Red Hawks on Tuesday, May 29. "It'll be OK."

For some, it may not be. Galioto says there will be no animosity toward anyone who picks dancing over the diamond. Miller, who scattered seven hits and struck out three, was emotional after the win, excited to add a sectional crown to the Morris County Tournament championship Hanover Park claimed earlier this month after a 39-year drought but upset about the prom to be held at Brooklake Country Club.

Galioto said that the NJSIAA was contacted after the game about the possibility of playing the game earlier in the day, perhaps at Caldwell University, where Indian Hills and Middletown North are slated to clash at 1:30 p.m. in a Group III semifinal. If a change is unable to be made, he understands and will make sure his team does, too.

No doubt, the Hornets (25-6) still were quietly elated about defeating Parsippany, which it played four times this spring, going 2-2.

Miller saw seven batters and gave up three runs in the first inning but clamped down. Three hits, including a double to Claudia Bennett, Parsippany's very first batter, a walk and an error, allowed the home team to take charge. After that, Miller put down 12 consecutive batters until Bennett singled with two outs in the fifth inning. A home run by Jenna Devens ensued and cut the Hornets' lead to seven runs - the final margin of victory.

"Seeing the home run had me a little worried," said Miller, whose best pitch versus the Red Hawks was her curveball. "I had to get out of that inning and calm it down."

Hanover Park got to work right away, scoring twice in the first inning on Petrovich's RBI base hit and Nicole Miller's sacrifice fly. The Hornets widened their advantage to 5-3 an inning later aided by four walks and hit batsmen. Aryana Galioto, a sophomore center fielder, drove in two more runs with a single in the third inning. Galioto finished with three RBIs.

The Hornets went through their entire lineup in the fourth inning and plated five runs. Again, walks, an error and a wild pitch proved costly. Nicole Miller, Brielle Junda (2 for 2) and Victoria LoPinto had hits in the inning.

"It was chain reactions," Miller said. "If one hits, the other hit. We feed off one another's energy."

"We pride ourselves on quality at bats and not wasting them," Galioto said. "We try to keep the girls focused. I don't rest and they aren't allowed to either."

Greg Cleary, Parsippany's coach, noted that his squad's season has been "a bit of a roller coaster, Hanover Park included."

"The teams that stay consistent, on an even keel, like Hanover Park, are successful," Cleary said. "We allowed baserunners and walks and it caught up to us. This is good for the younger players. We'll see how they respond next season."

He was glad there was a late bid to score some runs, of course.

"I'm not surprised that we came back a little," Cleary said. "We've done it all year. Just when you think we're out of it, we show some life."

View the embedded image gallery online at:
https://soar-nj.com/sports/softball/item/1528-hornets#sigProId3bcf4c830b
More in this category: « Homer sends Mt. Olive into final Quigley gets in one more home run »