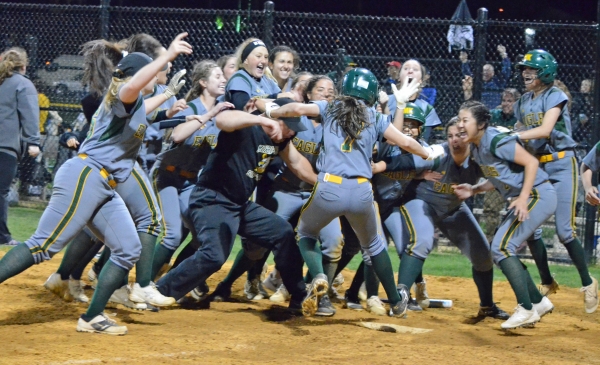 ROXBURY _ Skye Eppel paced the dugout in the bottom of the seventh inning, pondering what would happen if Morris Knolls got back to the top of the order.

Eppel, a junior centerfielder and leadoff batter, took a few peeks at the action on the field and cheered at times as the Golden Eagles tried to recover from a one-run deficit. After Brielle Eike singled and Nicole Florey walked, Eppel, her stomach churning, was assured another at-bat. The pacing finally ceased when she was in the on-deck area.

The anxiety soon turned to euphoria when Eppel hammered a first pitch over the fence in center field - only the second home run of her career - to conclude an incredible rally and provide top-seeded Morris Knolls with an 11-9 victory over No. 6 Mount Olive for the 2019 Morris County Tournament title at Landing Park on Saturday, May 11.

"I was not expecting a home run," Eppel said of the dramatic two-out homer. "I don't hit many. All I wanted was a base hit. I just wanted to get a run in and tie it. I wanted to give us a chance to pull through. I was a nervous wreck. I obviously want to be in a situation like that and prove myself. Even in the field, I'm on edge. I'm proud of myself. It's something I always wanted to do. It's really cool."

Eppel did not watch the flight of the ball. She hustled to first base and, realizing the ball was out of the park, raised her arms up and continued to make her way around the bases. Of course, her teammates and coaches were waiting and swarmed her to celebrate their first MCT crown since 2014.

Keith Heinemann predicted Eppel would make an epic contribution in the MCT final on the bus ride to the game. He shared his thought with assistant coach Jolyn Veres, telling her Eppel, who has been slumping, would "come up huge."

"The way we won was unbelievable," Heinemann said. "It was an emotional rollercoaster. So many ups and downs... This is great."

In the top of the seventh, the Marauders, trailing 8-4, had a major comeback of their own, sending nine batters to the plate and scoring five runs to pull in front, 9-8. They got their fifth run on a bases-loaded walk in the top of the seventh. They got two more on Alyssa Segnello’s single up the middle for 8-7. Lindsey Walter poked a single to right field - the 100th hit of her career - to knock in a pair of runs and put Mount Olive in control, 9-8.

That, naturally, left Morris Knolls uneasy. Mount Olive, meanwhile, was elated to have new life and felt they were on the verge of the title. But, nothing was certain, as evidenced by the game's five lead changes.

Morris Knolls gained a 2-0 advantage on Jess Arminio’s home run in the first inning. Eppel, who led off with a base hit, scored on the one-out shot to left-center field.

Winning pitcher Kayla Turcios encountered control problems in the top of the fourth inning and Mount Olive capitalized by putting across three runs and led, 3-2. The Marauders had four hits, the big blow being the bases-loaded, three-run double by No. 8 batter Bella Salafia. Bri Segnello started the inning off with a double off a first pitch. Two walks ensued before Salafia doubled, also off a first pitch. The bases were filled again but Turcios quelled the threat with a strikeout.

Morris Knolls received an RBI single from Maddison Perna and a two-run double from Casey Heitmann in the fifth for 5-4. Perna picked up another RBI with a bunt in the sixth. Morris Knolls scored its seventh and eighth runs on wild pitches.

"It was a great win, especially because it was so back and forth," said Perna, the Golden Eagles' junior shortstop. "Mount Olive is great competition to play against. When we were up, it was exciting. We were jumping and cheering. Being down was a punch in the gut. Some heads went down. When Skye hit her walkoff to end it, feelings just rush through your body. The team really came together. It was a great win."

Eppel was pleased that Morris Knolls accomplished the second of three goals that were set this season. All that remains is a state crown.

"When we were up by four runs, all we were thinking was we needed three outs and we'd be county champs," Eppel said. "The whole thing was pretty intense and scary. At 2-0, some of us said 'We've got this.' So much happened after that. It was crazy. That's why winning is so great."