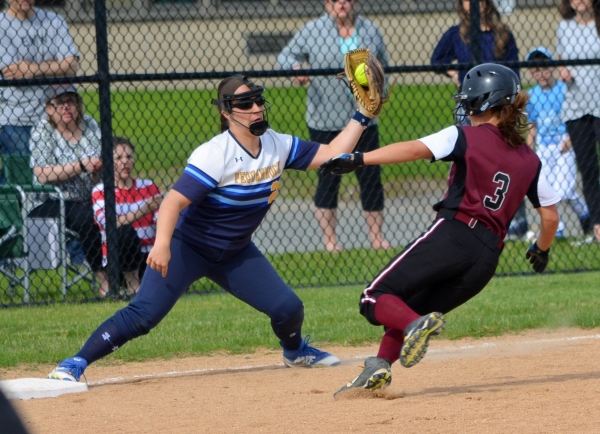 PEQUANNOCK _ Brielle Toone and Julia Cucci shined in a pressurized state tournament atmosphere.Toone came up big in the pitcher's circle and Cucci gave a top-drawer performance at the plate to lead Pequannock past Newton, 7-4, in a North Jersey Section 1, Group II first round NJSIAA Softball Tournament game on Thursday, May 16.

Fifth-seeded Pequannock advances in the states and will travel to meet fourth-seeded Glen Rock, a 3-1 victor over 13th-seeded Kittatinny, on Monday at 4 p.m. in a sectional quarterfinal contest.

A sophomore right-hander, Toone tossed a masterful complete game, scattering nine hits, striking out two and walking two. Cucci, a senior first baseman, went 2 for 3 and had a career-high four RBIs, including the biggest hit of the game. With Pequannock trailing, 1-0, Cucci, hitting out of the No. 9 slot in the batting order, came up with the bases loaded and one out in the bottom of the second inning. She smashed a three-run triple into the right-center field gap, scoring Shannon Wall, Caitlin Colicchio and Nicole Pierro, to give the Golden Panthers a 3-1 lead they would not lose.

"The count was 3 and 1 so I was looking for something good to hit," said Cucci, a senior first baseman. "It was a fastball on the outside of the plate and I just went with it to the opposite field. I was happy I could contribute in any way I could to this win."

Cucci has missed about half this season while traveling to China, Barcelona, Spain and several other Western European countries. But the four-year varsity player came through when it mattered most against the Braves. Also coming up clutch was Toone (10-6), a sophomore right-hander, who stranded eight base runners. The Braves had threats going almost every inning (Toone retired the side in order in the second) yet, in tense moments, she prevailed with some big deliveries, inducing popups and ground balls.

"I just tried to stay ahead in the count and let my defense do its job. I have a lot of confidence in them," Toone said. "We hope this is only the first step on a long journey in the state tournament. We are confident that we are playing our best ball of the year."

The Golden Panthers, winners of three straight games, tacked on a run in the bottom of the sixth to make it 6-1 on a leadoff booming double by Lindsey Wall, a groundout to first base and an RBI single by senior third baseman Shannon Wall (3 for 3, 2 runs scored). Also chipping in offensively for Pequannock was senior right fielder Nicole Pierro (2 for 4, double, one RBI, one run scored).

Pequannock coach Mary Ann Goodwin, in her 19th year at the Northeastern Morris County school after spending four seasons at the Wayne Hills helm, now has over 450 career wins (she earned No. 455 against the Braves Thursday). She said a strong regular season schedule against fellow NJAC-Liberty Division opponents like Parsippany, Hanover Park, Whippany Park and Kinnelon helped prepare the Golden Panthers for the state tournament.

"Our conference is very, very strong and we are tested to the maximum in almost every division game we play," said Goodwin, whose team has a 6-6 mark in the Liberty, behind first-place Hanover Park (9-1), second-place Parsippany (8-2) and third-place Whippany Park (6-4). "That gives us a chance to get used to quality high-level competition before the state tournament even begins, and that is a big help."

Goodwin also made several key strategic moves pay off against the Braves from Sussex County, intentionally walking Newton No. 3 batter, sophomore shortstop Madeline "Maddy" Gore three times after Gore blasted a solo home run 10 feet over the fence in straightaway center field to give Newton a 1-0 lead with two outs in the top of the first. Goodwin had Gore walked with two outs in the top of the third to put runners at the corners and Toone worked out of the jam by inducing a popup to end the frame. Then Gore was walked to put runners on first and second with two outs in the fifth and Toone got out of it by getting a grounder to senior shortstop Juliette Davis to end the inning.

In the top of the seventh, Gore was walked with one out to load the bases with Pequannock holding a six-run advantage at 7-2. Sophomore first baseman Amy Fehr had an RBI grounder and junior second baseman Abigail Wittig stroked a two-run single to cut Newton's deficit to 7-4. However, Toone struck out the last batter of the game to end it.

The Braves compete in the NJAC-Freedom Divison, along with powers like Vernon, 9-1 within the division and Lenape Valley (7-2). Newton, under the direction of 11th-year coach Curt Pakutka, put on a strong performance and was game until the end despite playing under difficult heart-rending conditions.

The Braves softball team, along with the rest of the high school, is mourning the death of Alexis Faye, known as Lexi. Faye was killed in an automobile accident on Saturday, May 11, the day after the Newton High School junior and senior prom, in Fredon Township.

Faye, a junior, was a passenger in the one-car accident. The driver of the vehicle and the two other passengers in the car, also Newton High School students, were injured. Faye, a 17-year-old junior, was a statistician for the boys lacrosse team and was attempting to help form a high school girls lacrosse program at the Sussex County school. The community was very shaken by the death of a very popular and accomplished student who wanted to major in communications in college.

Senior Carly DeIorio, the starting center fielder and leadoff hitter for the Braves, sang "Amazing Grace" at the candlelight vigil held to honor Faye on Wednesday night at the high school. Faye's mother, Joan, is a member of the Newton Board of Education. The wake was Thursday and the funeral will be Friday for the "very kind and considerate" girl.