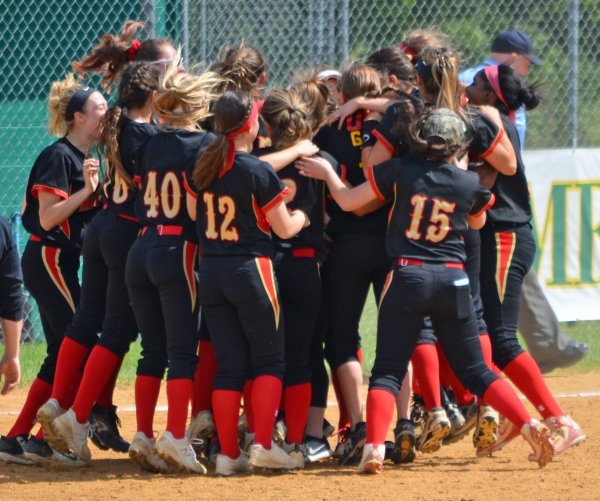 Photos by Sandy Seegers Mount Olive players are elated after triumphing in a sectional semifinal on May 24, 2019.
Rate this item
(6 votes)
Tweet

As a result, Mount Olive is headed to the sectional championship game after the Marauders edged Morris Knolls, 3-2, in a heart-pounding thriller on Friday, May 24 in North Jersey Section 1, Group IV state semifinal action.

The fifth-seeded Marauders (17-6) will host sixth-seeded Bergen Tech (22-7), a 5-2 victor over seventh-seeded Randolph (13-9) in a game concluded Friday after starting Thursday and then being delayed by rain in the seventh inning with the Knights ahead, 5-0, on Tuesday, May 28 in the sectional final.

Pettenger, a senior left fielder, ripped a one-out run-scoring single to left field to cap a two-run rally in the top of the seventh inning for a comeback-inspired Mount Olive team, giving the Marauders a one-run advantage.

Walter, a junior shortstop, who had driven in the tying run earlier in the top of the seventh, came on to pitch in relief in the bottom of the seventh with the bases loaded and one out. Walter, a right-hander, calmly struck out the first batter she faced and then induced a pop-up to shortstop to end the game as she stranded the three Golden Eagles' base runners.

"I just wanted to get my hands on it and get it past and over the infield," said Pettenger (2 for 4) of her game-winning hit. "I'm really happy with the way we came back and won. Our prom was last night but we were definitely ready to go today. We wanted one more game at home this year and we got it with a complete team effort. I'm proud of everyone on the club."

Also in a super-buoyant mood was Walter, who had started the season splitting the pitching with Anna Callahan. Walter became full-time shortstop midway through April.

"I just wanted to get ahead in the count and work hard to make sure it wasn't a fly ball that could score a run, but more of a grounder, pop-up type of pitch," said Walter of her big strikeout for the second out in the bottom of the seventh. "That was a 2-and-2 pitch and it was a curve that really floated down and out. On the final batter of the game, I fell behind 2 and 1 so I came in with a pretty good pitch, but she got under it and our defense really came through behind me.

"On my hit (that tied the game), I wasn't looking for anything special, just kind of trying to drive the ball somewhere. This team is really special. It always believes, right down to the last out, no matter the score."

Senior Isabella Salafia led off the top of the seventh for Mount Olive by drawing a walk on a full-count pitch and then was bunted on a sacrifice to second by Alyssa Segnello, the No. 9 batter. Walter then produced the game-tying single, went to second on the throw and scored on Pettenger's game-deciding hit.

Walter (3-2) earned her second save with the big closer effort in her seventh appearance in the circle in 2019 and she is currently batting .563 (49 for 87) this year with 28 runs scored and 17 RBIs. A year ago as a sophomore in 2018, the prolific Walter swung the bat at a .529 clip (55 for 104) with 34 runs scored on the season. With 109 career hits currently, Walter looks poised to break the all-time Mount Olive school record in that category a year from now.
Callahan (13-3), a junior right-hander, threw an excellent 6 1/3 innings for the visiting Marauders, limiting a potent Morris Knolls lineup to only two hits, while striking out three and walking three.

Top-seeded Morris Knolls (23-5), which had a three-game winning streak snapped, trailed, 1-0, entering the bottom of the sixth. But three errors, a sacrifice bunt and RBI ground balls by senior Maddison Perna and junior Carley Mahan gave Morris Knolls its 2-1 lead.

Mount Olive had taken a 1-0 advantage in the top of the second on a leadoff single by sophomore Bri Segnello followed up by Callahan, who was hit by a pitch, to put runners on first and second with no outs. Salafia then stroked a one-out RBI single to open the game's scoring.

"This team has a great, great deal of heart. They always fight back and give it everything they have," said coach Bill Romano, in his 10th year at the Marauders' helm. "We stayed up even after we gave up the lead in the bottom of the sixth and we stayed strong the rest of the way against a very tough and talented Morris Knolls team."

Mount Olive lost to Morris Knolls, 11-9, in the Morris County Tournament championship game on Friday night, May 11. In that game, Mount Olive, the sixth seed in the MCT, led 4-3 after 4.5 innings, trailed 5-4 after five innings, fell behind 8-4 after six innings, came up with five runs in the top of the seventh inning to take a 9-8 lead and then lost 11-9 when No. 1-seeded Morris Knolls' junior center fielder Skye Eppel blasted a three-run home run in the bottom of the seventh inning to give the Golden Eagles their first MCT crown in five years since 2014.

Morris Knolls (23-5) had a three-game winning streak snapped and the Golden Eagles had won five of their last six games and nine of their 11 before the loss Friday. Mount Olive has now won three games in a row, nine of its last 10 games and 13 of its last 15 games.