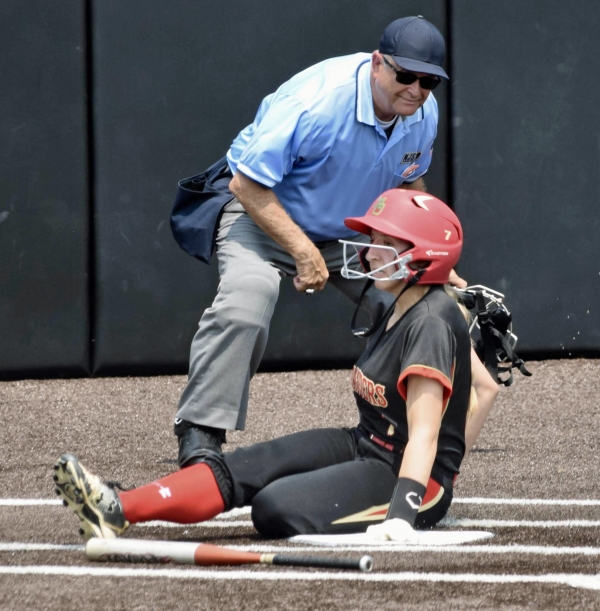 NEWARK _ Mount Olive's pitchers have been the epitome of stingy during the team's state tournament run.

Anna Callahan and Lindsey Walter have not given up an earned run in the Marauders' last five games, certainly an impressive feat. Their efforts may have been a bit overlooked because Mount Olive's bats are booming and have produced 33 runs during that stretch.

On Friday, May 31, Walter came on in relief of Callahan and allowed one hit over the last 2 1/3 innings when the Marauders defeated North Hunterdon 5-2 in a Group IV semifinal at Ivy Hill Park. The victory earned Mount Olive its first berth in a group title game.

"It's incredible what these pitchers are doing," Romano said. "It really is. Anna's been awesome. So has Lindsay. They're doing a great job."

Versus North Hunterdon, which ousted Mount Olive from the state tournament last year, the performances of Callahan and Walter were exceptional. Callahan started and went the first 4 1/3 innings and yielded three hits before encountering some trouble in the fifth. Walter came in from shortstop with one out and two on. She got the last two outs in the fifth inning then retired the side in order in the sixth. In the seventh, Walter gave up a hit but no harm was done. Within minutes, the Marauders (19-6) were celebrating the win that propelled them into the final opposite Hightstown.

"Both pitchers hit their spots," Vetere said. "What's great about both is they take ownership and learn from their mistakes. Lindsay has a little more finesse than Anna. They've both been great. It's a good switch because teams have already seen Anna three times when Lindsay comes in. It gives the batters something different to look at."

Initially, the two junior pitchers were going to split the responsibilities. However, by mid-April, right after the Randolph Challenge, it was decided that Callahan would get the bulk of the work and Walter, a slick fielder and speedy leadoff batter, would relieve and start here and there. The rest literally is history as evidenced by the upcoming final appearance.

Mount Olive, which blanked Bergen Tech 7-0 to take the North Jersey Section 1, Group IV crown, received RBI hits from Gabby Grillo, Kaitlin Pettenger, Isabella Salafia, Alyssa Segnello and Walter and put across all of its runs in the third and fourth innings. Segnello smacked a two-out double and Walter finished with a pair of base hits.

"This is a great win," Romano said. "We're not done yet. We're not finished. We're not just happy to be there. We want to win."

Wildcats shut out by Cedar Grove

Whippany Park knew what it was up against in its Group I semifinal.

The young Wildcats weren't intimidated by the prospect of facing Cedar Grove ace Mia Faieta and went into the game at Ivy Hill Park hoping to score an upset.

Faieta, however, was in command and struck out 14 to power Cedar Grove to a 6-0 victory over Whippany Park on Friday, May 31.

"We knew their pitcher was one of the best in the state," Wildcats coach Todd Callaghan said. "It was going to be a challenge. Cedar Grove is more experienced right now. Their pitcher has been here. Ours is a sophomore. It was a good experience for us. We're young and we're only going to get better."

Cedar Grove took a 3-0 lead in the bottom of the third inning on two-out hits by Katie Peterson and Gianna Bocchino. Peterson drove in the first run with a base hit before Bocchino laced a two-run single to left field. A sacrifice fly in the fourth inning made it 4-0. The final two runs came home in the fifth.

The only player to reach Faieta for a hit was Alexa DiGiorgio.

Claiming a sectional title was the highlight of Whippany Park's season. Callaghan thought the Wildcats, who start three freshman and a sophomore, had the talent to make it to the sectional final.

"Being in that final was great. Anything after that was a bonus," he said. "Roselle Park was a challenge. If we got past them, anything could happen."