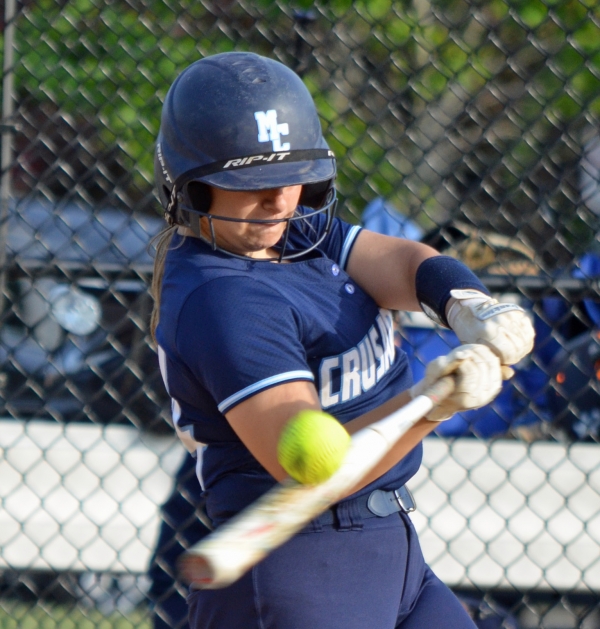 Photos by Maryann Harlow Morris Catholic had double-digit hits in its MCT semifinal win over Pequannock on Tuesday, May 25.
Rate this item
(5 votes)
Tweet

ROXBURY _ Three weeks into the season, Morris Catholic’s Dani Berlin went from second to seventh in the order but wasn’t offended.

Alex Eckerson has dwelled at the bottom of the lineup all spring but doesn’t mind one bit. She relishes proving people wrong.

Berlin and Eckerson, clearly at ease with their roles, had two hits and two RBIs apiece to help the second-seeded Crusaders to a 10-0 victory over No. 6 Pequannock in a Morris County Tournament semifinal on Tuesday, May 25 at Landing Park.

In the other semifinal, Roxbury scored all of its runs in the last two innings and rode the two-hit pitching of freshman right-hander Hailey Errichiello to an 8-1 triumph over top-seeded Whippany Park.

“We’re making history,” said Berlin, referring to the win that vaulted the Crusaders into their first softball final. “We’ve practiced hard for this moment. It’s good to go this far in the counties.”

In Berlin’s case, it was equally advantageous to descend five spots. Her role at the start was bunting and sacrificing. Now, it’s swinging away and coming up clutch.

“My coach (Nick DeGennaro) told me my bat was active and put me in a better spot to get people in,” Berlin said. “There’s not a soft spot in our lineup. We all hit pretty well.”

Berlin doubled in a full-count situation to knock in the seventh run.

“I like full counts,” she said. “I enjoy the pressure. It keeps things interesting."

Although Eckerson's name is last on the lineup card, her performances have been top notch. Eckerson also faced a full count and came up with a two-run base hit to left-center field to cap Morris Catholic's six-run first inning.

"I have no problem with being down there," said Eckerson, the second baseman. "Some think I'm an easy out."

That wasn't the case as Eckerson got on base each time she stepped into the batter's box. After the first-inning single, she legged out an infield hit and drew a walk for the Crusaders (19-1).

"Every one of our batters has confidence," Eckerson said. "If one of us doesn't get on, the person behind us will."

Morris Catholic’s very first batter, Jess Brown, took Brielle Toone’s initial offering and sent the ball caroming off third base for a hit. An error put runners at second and third. With one out, Gianna Foreman walked and the pitch was wild, scoring Brown. Hailee Sobieski made it 2-0 with a base hit to shallow right field. Carly Mockenhaupt and Hannah Streicher had RBI singles before Eckerson stroked her two-run single.

In the third, the Crusaders expanded their lead to 8-0 on Berlin’s double and Streicher’s single. Kate Heslin, hitless in her first three at-bats, homered and Mockenhaupt doubled to plate MC’s last two runs.

Streicher had a stellar outing and did not yield a hit until Pequannock’s No. 7 batter, Gianna Goetz, broke through with a one-out single off a full-count pitch in the fifth inning.

The defense was solid behind Streicher, coming up with several all-out plays, namely a diving catch in left center by Brown that robbed Andie Eddeh of a leadoff base hit in the third. Berlin made an arm-extended-over-the-head nab to end that inning.

"I can't say enough about this group," DeGennaro said. "They're great. They're fun to coach. We've got two good pitchers and batters who've been getting it done all year."

"They hit and we didn't," Golden Panthers coach Maryann Goodwin said. "Morris Catholic put the ball in play. I've said it all along and that's why they won. (Streicher) throws hard and that was important for them, too."