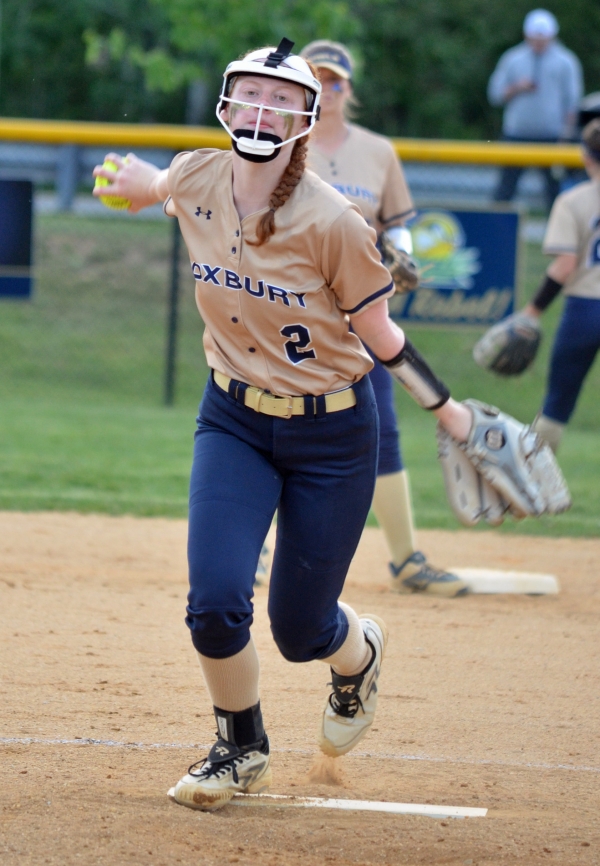 Donnelly, a senior shortstop, was choked up after hitting a hard shot off the left foot of Wildcats first baseman Makayla Schwippert in the sixth inning. An inning later, Donnelly doubled and cried in the dugout. And, finally, she did what would be expected following a monumental victory...

"I broke down in the huddle," said Donnelly shortly after the fifth-seeded Gaels pulled off a dramatic upset by scoring all of their runs in the sixth and seventh innings to jolt the Wildcats, 8-1, on Tuesday, May 25 at Landing Park.

"This is my last year so it's important. And, getting two hits... I can't believe it. This means the world to me."

Donnelly, Roxbury's lone senior starter, of course, was ultimately elated, flying high and thinking of what it will be like to clash with second-seeded Morris Catholic in the MCT final, which is slated for Saturday, May 29, at 7 p.m., also at Landing Park.The Gaels were last in the title game in 1997 and fell 6-1 to Morris Hills. Roxbury's only other final appearance was in 1979 when it was runner-up to Hanover Park.

Freshman pitcher Hailey Errichiello loomed large in the shocker, surrendering two hits, notching 11 strikeouts and walking one. The game was intense yet nothing shook the poised Errichiello. Whippany Park put up a run in the bottom of the first inning on an error and Evelyn Dente's bunt base hit and seemed intent on riding that and the seasoned arm of senior Julia Swan (11 strikeouts) the rest of the way.

However, the Gaels' bats awoke in the sixth inning. With one out, leadoff batter Cam Fehsal walked. Errichiello got the first hit off Swan, beating the throw after a groundball to third. Kendall Fehsal tied the score, 1-1, with a base hit to left field. After a strikeout for the second out, Donnelly stepped into the batter's box and ripped a 2-2 pitch toward first base and the too-hot-to-handle ball could not be stopped and two runs scored, giving Roxbury a 3-1 advantage.

In the lower portion of the inning, the 14-year-old Errichiello retired the Wildcats in order with a groundout and two strikeouts. The Gaels' bats boomed again in the top of the seventh inning and produced five more runs. With one out and the bases loaded, Kendall Fehsal tore into an 0-2 pitch and singled to left field, driving in the fourth and fifth runs. Then, with two outs, Donnelly got her bat on a first pitch for the RBI double before Lia Milsom added a run-producing base hit.

"It took time to see (Swan's) pitches," Roxbury coach Paul Critelli said. "We were overmatched early on. I thought once we saw her more, we might come around. I felt that if we were patient, good things would happen."

Donnelly admitted to being a little on edge as the innings progressed. Still, she believed she and her teammates could conjure up some magic.

"I just knew something would happen," Donnelly said. "WIth this team, it always does. The energy is there. I felt that somehow we'd hit and win it."

Errichiello, nicked for a bunt and infield hit, stymied the Wildcats with every pitch in her repetoire: riser, screwball, curve, offspeed and more. Those anticipating her to cave in witnessed an unforgettable performance as she retired 13 of the last 14 batters she faced.

"I wasn't really nervous," Errichiello said. "My teammates have my back. I spent yesterday and today mentally preparing. I thought about what I'd do if my pitches weren't working and what I'd do in certain situations. I was so excited when we got runs. The fans were screaming loudly. I had a feeling we'd pull through."

Landing Park is familiar to Errichiello, who played travel ball there as a member of the Roxbury Rebels. It's also the place where she walks with her mother, Jaime, every other day for 30 minutes to satisfy the requirements for physical education. Errichiello has engaged in virtual learning since softball began so she wouldn't have to risk having to quarantine during the season.

"I'm on the path when I'm here, not on the field, but maybe there is some comfort at this place," Errichiello said.

Errichiello is superstitious and that factors into her choice of equipment and clothing on game days. She wears the same chest guard, sliders and pants.

She is part of an athletic family. Errichiello's parents played sports at Parsippany Hills High School. Her father, Darrin, was on the baseball team and wrestled while her mom participated in basketball. Perhaps that's where she gets her competitiveness from.

"Hailey's mental strength is great," Critelli said. "She never allows the moment to get too big. She just keeps rolling. The first inning is the perfect example. Hailey will not give in."

Donnelly referred to Errichiello as "an incredible piece of the team" and "a big asset."