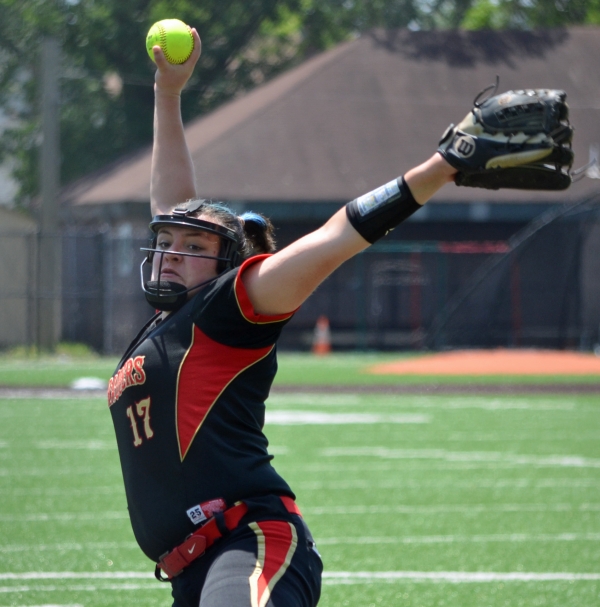 Mount Olive's Becky Palmisano, No. 17, has given up one earned run over Mount Olive's last three games.
Rate this item
(3 votes)
Tweet

LITTLE FERRY _ The riseball had to wait. So did the screwball which Mount Olive's Becky Palmisano had worked on briefly.

Palmisano came down with COVID-19 in late March and the illness brought Palmisano's pitching activities in preparation for the 2020 season to a halt. The timing couldn't have been worse as Palmisano, who saw limited varsity action as a freshman, was set to be the Marauders' ace.

"It was frustrating to not be able to work on what I needed to work on right before practices started," said Palmisano, a junior right-hander. "I wanted to make all of my pitches better before the season and then I couldn't. Some of the pitches were new in the past year."

Once Palmisano recovered and was cleared, she resumed her mission and was more determined than ever. On Thursday, June 10, she picked up one of her most important wins of the season, surrendering one hit and striking our nine when sixth-seeded Mount Olive shut out second-seeded Bergen Tech 13-0 in a North Jersey Section 1, Group IV semifinal at the Little Ferry Sports Complex.

"It's been really exciting," Palmisano said of the victory that vaulted the Marauders into the sectional final opposite Livingston. "To do what we couldn't do last year and get back into the swing of things. Many of us have played together since we were little and that means a lot. I'm really happy with how things have gone in the second half of the season."

Palmisano has played an important role for Mount Olive, not only baffling opposing hitters but wielding a booming bat. Versus Bergen Tech, she slugged a home run. She has homered in every state tournament game thus far.

The No. 3 batter in the Marauders' lineup, Morgan Joseph, also homered in the fourth inning and finished with four RBIs. Mount Olive, which rapped out 13 hits, scored three times in the bottom of the fourth to gain a 9-0 advantage. Bri Segnello went 3 for 4 with a stolen base and knocked in a run.

"This is the fun time," Mount Olive coach Bill Romano said. "We didn't play very well in the counties so... If we continue to hit and play this way, we should do well. We're getting good pitching from Becky. She's given up one earned run over the last three games."

Romano praised Palmisano for hitting her spots and increasing the speed of her pitches.

"After Becky was out, everything dropped off a bit," Romano said. "She's come back strong. In May and June, she's been lights out."

Palmisano zipped through Little Ferry's lineup, retiring the first 11 batters in order. In the third inning, she struck out the side. In a span that bridged the second through fourth innings, Palmisano struck out six in a row. The only batter to reach her for a hit was the Knights' No. 3 batter, Riley Sobel, who singled up the middle with two out in the fourth inning. Sobel wasn't on the basepaths long as she was thrown out stealing second by catcher Jordan Pettenger.

Mount Olive had no trouble making solid contact off Sobel in the five-inning game. The Marauders went up, 1-0, in the first inning on Carly Smith's run-producing groundout. In the third inning, Mount Olive extended its lead to 6-0. Highlighting the third inning was Morgan Demm's two-run double. Demm, a sophomore shortstop, sent the ball down the line in a pressure spot, coming through in a two-strike, two-out situation.

Four more runners crossed the plate in the fifth inning. Joseph had a two-run double and Bri Segnello singled in a run. Smith tripled in the 13th run.

"It's nice being able to redeem ourselves," said Palmisano. "We were up and down for awhile. We've proven we can come back. We're showing what we can do."