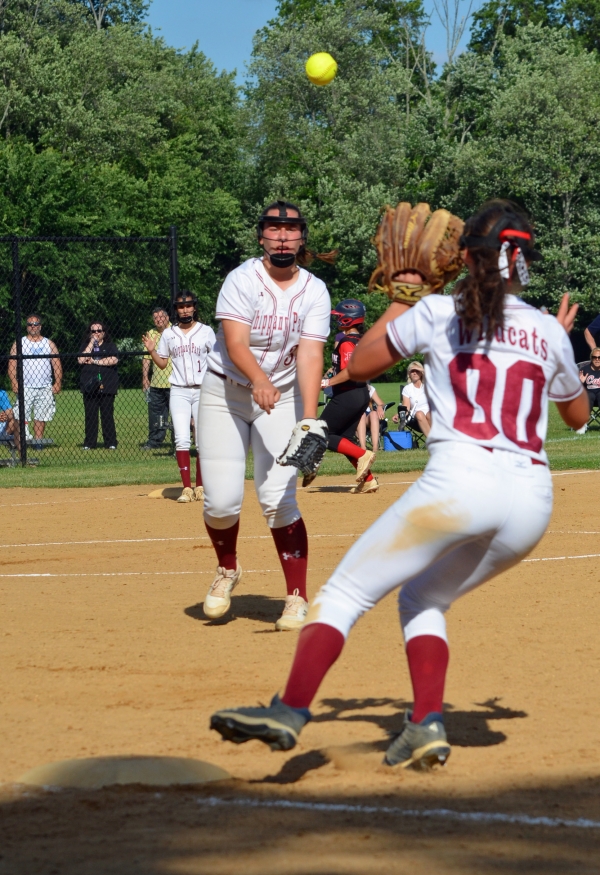 Photos by Sandy Seegers Madeleine Oswald throws to Mikayla Swan, covering first base, for the final out versus Emerson.
Rate this item
(2 votes)
Tweet

HANOVER _ Whippany Park second baseman Mikayla Swan was admittedly uncomfortable as eight Emerson batters took their turns in the batter's box in the top of the seventh inning.

Two runs scored on a triple by Kelty Manning and another on a fielder's choice, reducing the Wildcats' lead, once seven, to a tense four. Still, Swan felt her sister, Julia, the pitcher, would somehow escape.

Mikaela Schwippert, watching the drama unfold from the dugout, felt the same way and told herself "Julia knows what to do."

Turns out the elder Swan did know what to do and she quashed the Cavos' last-ditch hopes. Whippany Park emerged with a 9-5 victory in a Group I semifinal on Tuesday, June 15 and earned a spot in the final opposite Clayton.

"I was a little nervous but I felt that Julia would get through it," Mikayla Swan said. "I just thought she'd get us out of it. Our intensity dropped a bit at the end and we allowed them to come back. It's good we had the lead. We kept going. Things can happen like what happened in the last inning. It can get crazy."

Schwippert, who had three hits and knocked in two runs with a single in the second inning, had nothing but confidence in Julia Swan and refused to let dark thoughts creep into her head when Emerson staged its comeback.

"Yes, I was nervous but, no, I really wasn't," said Schwippert, the Wildcats' freshman designated player. "Julia wasn't going to let it get worse. She definitely knew what to do and Katie (Brunner), our catcher, knew what to call."

Julia Swan ended the game with 11 strikeouts and three walks and gave up five hits. Her performance earned her the usual - a bottle of water poured over her head by Schwippert. Swan, a senior, waited awhile before dousing Swan, who allowed no runs in two previous state tournament games.

Todd Callaghan, coach of the Wildcats, was pleased with his ace. Not only did Swan have the mettle to work her way out of the late jam, she contributed a pair of hits, one of them an RBI double in the sixth inning, to aid an 11-hit attack.

"We had enough of a lead," he said. "I felt Julia would get it done and that the defense would settle down. I trusted them to make the plays. We made a few little mistakes to help them. Maybe we thought we had it in the bag too much. We got too relaxed. I thought we hit the ball well."

Schwippert, whose mother, Sonia, is a very vocal supporter of the team, was glad that her bat awoke. She entered the game hitless over her last six at-bats.

"I came through today," she said. "I needed it. I was making contact but nothing was falling in. Everyone is always yelling and cheering and that helps me. I needed to stay focused."

Whippany Park (21-3) immediately capitalized against Emerson, posting a pair of runs in the first inning on Madeleine Oswald's sacrifice fly and Schwippert's run-producing single. The Wildcats extended their advantage to 6-0 after three innings.

The Cavos got a run in the top of the fifth inning on an error. Whippany Park also put up a run in the fifth on another Oswald sacrifice fly for 7-1.