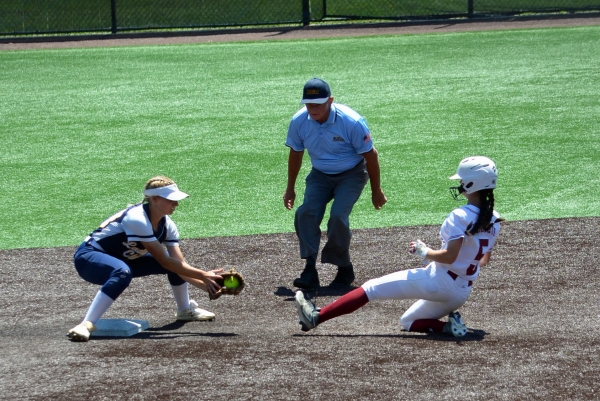 NEWARK _ Julia Swan was first-rate once more but, this time, it was the team from South Jersey that had just enough to prevail in a battle of top-flight pitchers from North and South Jersey.

Sophomore right-hander Meadow Lake threw a one-hitter for Clayton, striking out 10 and walking two, to lead the Clippers past Whippany Park, 3-0, in the Group I state championship softball game on Thursday, June 17 at Ivy Hill Park.

Swan, a senior right-hander, proved worthy in striking out eight, walking one and hitting one batter, going the seven-inning distance and scattering 11 hits in the final appearance of her incredibly accomplished three-year career for the Wildcats.

Whippany Park finished the season at 22-4, winning the North Jersey Section 2, Group I championship, 7-0, over Becton Regional of East Rutherford on Saturday, June 12 and turning back North 1, Group I champion Emerson, 9-5, in the Group I semifinals on Tuesday, June 15 before the loss to Clayton.

Whippany Park has one of the best softball traditions in New Jersey history, winning seven state group crowns, a record nine Morris County Tournament championships and the Wildcats had a state-record 75-game winning streak from 1989 through 1992.

Swan concluded her stellar career in the circle for the Wildcats with a 32-8 mark and was 17-3 this season.

Junior outfielder Evelyn Dente produced the one hit for the Wildcats, a single to center field on an 0-and-2 count leading off the bottom of the fourth inning with the game still scoreless. Whippany Park also had a runner reach third with two outs in the bottom of the fifth inning, trailing only 1-0, but a line shot down the left field line that was just inches foul and a deep drive to left field that Clayton sophomore Allyson Koerner made a great running catch on as she backed up near the left field fence.

Also, a Whippany Park runner, Giovanna Mess, who had stolen second and then third base, was hit in the helmet by an errant throw in the bottom of the third inning but the ball stayed in play and Clayton sophomore third baseman Alana Gannon recovered it in time to keep Mess from going home to keep the game scoreless.

The Clippers broke a scoreless deadlock in the top of the fifth on a leadoff double by sophomore Gianna Muhaw, a sacrifice bunt and an RBI on a safety squeeze bunt by junior Brianna Berwick.

In the sixth inning, Clayton added two runs on a two-out single by sophomore MacKenzy Holler, a double by Lake that moved Heller to third, a wild pitch that scored Heller and an infield single right in front of the plate by Muhaw that scored Lake with the third run. Holler, Muhaw, and juniors Cassie White and Gianna Ettore all had two hits apiece for the Clippers, who return almost everyone next year for what could be another solid season.

Clayton (27-1) is starting to build up a strong program of its own over the last three years. In 2018, the Clippers finished 2-12. In 2019, Clayton was 12-7 and lost in the first round of the South Jersey, Group I tournament. Last year, the pandemic meant no spring season for any softball and all other teams in the state. This spring, Clayton earned its first sectional softball championship with a 3-0 win over Gloucester in the South Jersey Group I final then defeated Riverside, 8-1, in the Group I semifinals before taking home its initial group state championship with the victory over Whippany Park.

The only loss for the Clippers, who will enter the Tournament of Champions Saturday, was to Moorestown, 3-2, in the Fred Powell Tournament final on May 22 at Williamstown High School. Clayton is currently on an eight-game winning streak after starting the 2021 campaign 19-0 before the one-run loss to the Moorestown Quakers from Burlington County. Clayton took first place in the Tri-County Conference (although it is called Tri-County five counties are represented in the conference, Camden, Cape May, Gloucester, Salem and Cumberland) with a 15-0 record.

"Whippany Park is a very strong team and we had to be at our best today," said Clayton 11th-year coach Joe Moore. "Meadow was really on right from the beginning all the way to the final pitch and we got some clutch hits, just like we have done all year long, to back her up. I'm very proud of what our team did today, just like all year long."

Coach Todd Callaghan's Wildcats took second to first-time Morris County Tournament champion Morris Catholic in the Northwest Jersey Athletic Conference, splitting two games with the Crusaders and having a 15-2 record in the division with Morris Catholic having a 16-1 division mark. Whippany Park won at home against Morris Catholic, 2-1, on May 6 and lost in Denville on May 24 to the Crusaders by that same 2-1 margin. Whippany Park reached the Morris County Tournament semifinals this season, falling to Roxbury, 8-1. The Gaels went on to the MCT championship round where they fell to first-time MCT champion Morris Catholic, 2-1, on a two-out, two-strike, two-run double in the bottom of the seventh inning.

Callaghan, the veteran coach in his 16th season, has earned 235 career wins at the Hanover Township school.

Mikayla Swan could be the ace for Whippany Park in 2022. Julia Swan will go on to pitch for Fairleigh Dickinson University in the fall. This year, Mikayla Swan pitched in several games, working 33.1 innings, including tossing a perfect game with 14 strikeouts in a 17-0, five-inning win over Warren Tech in a first round North 2, Group I state tournament game.

"She just pitched a very solid all-around game," said Whippany Park coach Todd Callaghan about Lake. "The Clayton pitcher was very good and Julia was quite good, too. But we will be back."

Whippany Park last appeared in the Group I final in 2012, defeating New Egypt, 1-0, under Callaghan.

In 2019, the Wildcats edged Roselle Park, 2-1, to win the North 2, Group I title and then were defeated by Cedar Grove, 6-0, in a Group I semifinal. That means two sectional championships in a row were part of Julia Swan and her teammates' enormous legacy.

Whippany Park, in addition to Mikayla Swan and Evelyn Dente, will have freshmen Mikaela Schwippert and Ellie Williams, sophomore Madeline Oswald and juniors Giovanna Mess, Alyssa Pavano, Megan Gilbert and Katie Brunner and several other key regulars returning to the lineup in 2022.

"We're looking to another exciting and productive season next year," said Callaghan. "These girls never stop competing at the highest levels and always leave everything out on the field."