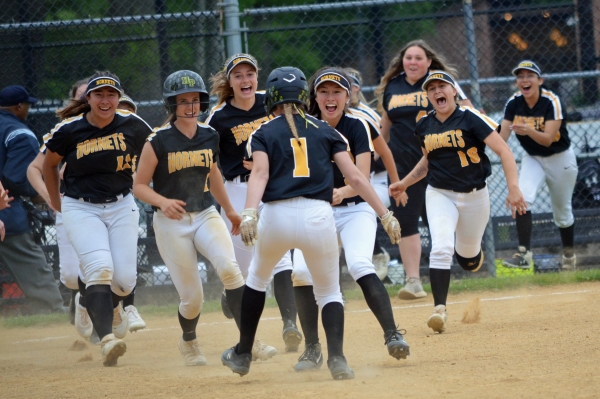 EAST HANOVER _ In the North Jersey Section 2, Group II final versus Bernards, emotions crept in that Adriana Carter had felt before during her many years as a pitcher.

Carter, Hanover Park's senior right-handed ace, put the negative thoughts that had briefly surfaced out of her head, kept battling and waited for a shift in momentum. As it turned out, there were two shifts - the one where the Hornets erupted for three runs in the bottom of the seventh inning to tie the score and the monumental one when they scored a run in the lower half of the ninth to eke out a 6-5 win over the Mountaineers to claim their second sectional title in five years.

"I think I threw pretty well today," said Carter, very appreciative of Alyza Dooley's game-winning base hit with one out. "There are times, though, when you get tired. It's hard to keep going. It's hot. You're exhausted. You're down."

What kept Carter and her teammates going were the fans who ringed the field. They couldn't disappoint them.

"I saw how many people were here to see me pitch, to watch us play," she said. "If we didn't have that support... I won't lie. I felt like 'This is it. It's over.' A team like ours, with our energy, makes me want to win. Some pitchers give up and hope for it to end. I didn't. I threw as hard as I could."

Carter, who will attend DeSales in the fall, fired and fired pitches, the majority of them fastballs. Carter's only concerns were movement and placement. Once Hanover Park knotted the score, 5-5, on a home run by Gina Lagravenis, Peyton Sward's single and doubles by Molly Cocco and Dooley (two hits, three RBIs), spirits were lifted and the Hornets kept surging.

The homer was the second this season for Lagravenis, the sophomore center fielder and No. 9 batter. A slapper at the start of the season, she was turned around at the midway point and has thrived ever since.

"I wasn't thinking home run. All I wanted was contact," Lagravenis said. "I'm so happy I led off with the homer because I wanted to help us anyway I could. I was trying to be positive and not get down. I'm so close to everyone. We're all best friends. I was a little down in the sixth but I kept trying because I didn't wsnt it to be over."

Bernards made it 5-2 with a run in top of the seventh inning on an error. The Montaineers came close to batting around. However, Carter and the Hornets persisted.

Hanover Park, which picked up its 20th win, got it done in the lower half of the ninth. Sward led off with a double to left center field, her third hit of the game and went to third on a groundout, setting the stage for Dooley. Dooley drove a 1-1 pitch up the middle to plate Sward and put an end to the tense game.

"I appreciate the pressure of a situation like that," Dooley said. "I wanted to make contact and hit the ball on the ground. I've been struggling with making contact an seeing the ball so this feels great. To be there for the team... They've done so much for me all season and in this game. When everyone was down, it hurt our energy. We got our energy back and became unstoppable."

Veteran coach Sergio Rodriguez could not fathom the heroics he witnessed, namely the home runs and Sward's reliability in the leadoff spot.

"We were down by three and Gina gave us life," he said. "Peyton is an on-base machine. The dugout was electrified by them. To be able to watch the girls create a memory that will last an eternity is my satisfaction. As adults, as coaches, we're educators and nurturers. We want our teams to have moments like this."

Bernards was on top, 4-0, after three innings. Hanover Park got its first run in the fourth inning courtesy of a homer by Carter.

After winning, it was time for the Hornets to engage in an activity that keeps them close - eating. Buffalo Wild Wings was the choice after the first two state tournament games. Following the semifinals, the Hanover Park contingent indulged at Capital Craft. Their destination after garnering the championship had not yet been decided.

"We can eat," Carter said with emphasis. "We love being together."