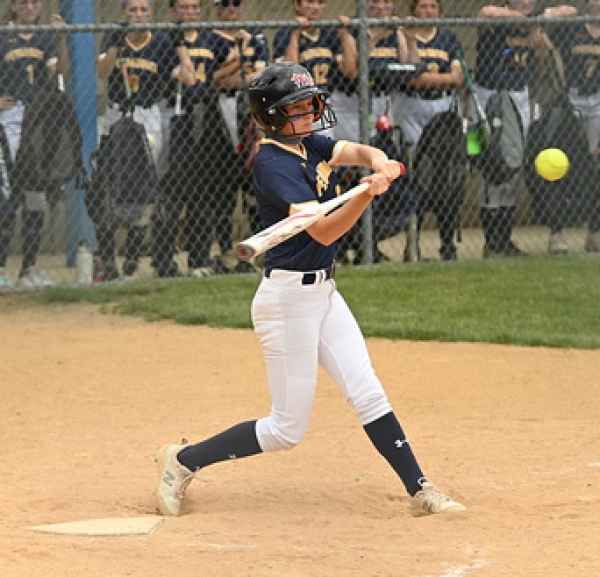 Photos by Ed Leonard Emma Bringard of Pequannock had two RBIs in the sectional final.
Rate this item
(3 votes)
Tweet

OAKLAND _ A very young Pequannock team had been looking to find its true self for the entire season - and it did - just at the right time during the 2022 campaign.

A couple of weeks ago, the Golden Panthers were flailing and had many question marks. Now they have provided the answers as they have completely reversed course from their troubles throughout April and in the first part of May.

As the spring in New Jersey has blossomed, so has Pequannock's offense, pitching and defense - all the necessary ingredients in the winning recipe that has them advancing to the Group II state semifinals.

Pequannock, sparked by a marvelous effort in the circle by sophomore right-hander McKenzie Minervini, well-balanced and clutch hitting throughout the lineup and a fine overall defensive effort, turned back Indian Hills, 6-0, in the North 1, Group II state tournament final on Friday, May 26.

The Golden Panthers will host Hanover Park (20-7) , a 6-5, come-from-behind, nine-inning victor over Bernards after a three-run bottom of the seventh inning that tied it 5-5, in the North 2, Group II final.

Minervini threw a complete game four-hitter, striking out four, walking none and hitting one batter to tame the Braves from Bergen County. Indian Hills, the top seed in the section and also a rather youthful squad, finished at 23-8 and had come into the game having won 17 of its last 19 and 18 of its last 21 games after starting off with a 5-4 mark. Pequannock and Minervini defeated Indian Hills, 9-5, in the Golden Panthers-hosted Blue & Gold Tournament the first weekend of the season.

Minervini kept Indian Hills off the board in the bottom of the third inning after two-out singles by Gia White and Mikayla Amoruso (the two moved up on the throw) put runners on second and third. But Minervini induced a fly ball to left to end the fame and keep the game scoreless.

Pequannock scored its first two runs in the top of the fourth inning on a two-out bases loaded walk to Emma Bringard and then Christina Banya was hit by a pitch to force home another run and make it 2-0. That is all control artist and superb ball-location execution pitcher Minervini would need.

"This was really a complete team effort, we have been playing so well, especially lately," said Minervini, also a member of the Jersey Pride club softball team in the summer and the fall. "Indian Hills is a very good team and we were able to hold them off by making some big plays at the right time today. I'm happy were beginning to get on a roll just at the right time of the season."

Minervini split time in the circle with the graduated Brianna Toone last season and is the full-time No. 1 starter for Goodwin's team this year.

Junior shortstop and leadoff hitter Niki Klimek (.400, 25 runs scored, 18 stolen bases this season) went 2-for-5 with a run scored and an RBI for Pequannock and junior first baseman Emily Fricker had a hit and two RBIs.

Third baseman Adrianna Mulato, a junior, went 1 for 4 with an RBI and a walk and junior Andie Eddeh went 1 for 3 with a walk and a run scored for Pequannock. Sophomore right fielder Katrina McMahon had a hit and an RBI and made a couple of really nice catches in right field. Junior second baseman Bringard had two RBIs and a walk. Senior center fielder Sam Blahut was a major force defensively with several great running grabs, including two of the spectacular variety, and senior left fielder Kailyn Gaffey made a fine catch after she and Blahut ran into each other, ending the bottom of the third, an inning that Indian Hills was threatening in.

It was a true Jekyll-and-Hyde season for Pequannock, which has come a long way since early April. Pequannock was 10th seed in the Morris County Tournament, where it defeated Morristown and Whippany Park before being halted by second-seeded Morris Catholic, 13-3.

In the first round of the North 1, Group II state tournament, the 10th-seeded Golden Panthers defeated Vernon, 4-1, behind a five-hitter and 13 strikeouts by Minervini. She threw five innings of shutout ball in a 14-0 five-inning win over 15th-seeded Pascack Hills in the quarterfinals. Minervini posted what may have been her finest game of the season, no-hitting Passaic County Tournament champions and third-seeded Lakeland, 7-0 with 12 strikeouts, one walk and no hit batsmen in the sectional semifinals.

Pequannock coach Maryann Goodwin earned her 489th career win with the state sectional victory over Indian Hills. She coached Group II state championship teams at Peqannock in 2009 and 2012 and a Morris County Tournament title squad in 2009, along with numerous league championship and sectional championship teams, the last coming exactly a decade ago in 2012.

"I'm very proud of this group. We are very young but we have gained invaluable experience throughout the season," said Goodwin. "The very tough schedule we played is helping us a lot in the state tournament. This is definitely the best softball we have been playing all year long."

The 70-year-old Leicht, a Paramus High School and Montclair State University graduate who played football and baseball for the Spartans in high school and the Red Hawks in college, has earned 563 softball wins at Indian Hills and 596 boys basketball victories at both Indian Hills and now Wayne Valley for a total of 1,159 wins in those sports in a forty-eight year coaching career that also included many years as a mathematics teacher at Indian Hills before retiring a few years ago.

"This is what I do," said Leicht, who indicated he will be back to helm the Braves next season along with coming back to be the head coach with the Indians of Wayne Valley. "I was really happy with the way we played this season, especially after the 5-4 start and next year we have some key pieces coming back."

View the embedded image gallery online at:
https://soar-nj.com/sports/softball/item/1760-ed-softball#sigProId0ab9576028
More in this category: « Dooley, Hornets stun Bernards in extra innings Crusaders are tops in Non-Public B »