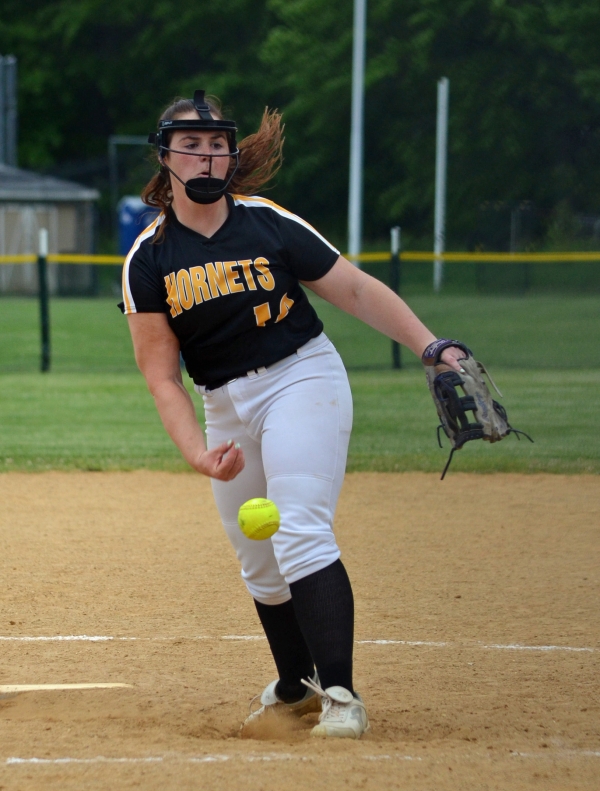 PEQUANNOCK _ Hanover Park got production throughout its lineup, good team defense and a solid pitching effort to defeat Pequannock, 15-5,in five innings in a Group II softball semifinal on Friday, June 3.

However, a day later at Ivy Hill Park, the Hornets fell to Haddon Heights, 4-0, in the Group 2 state championship game. Hanover Park, which last advanced to a group title game in 1980 under legendary coach Edie Stitt, earned top honors in its section in 2018.

The game against Pequannock (14-15) started normally enough with junior shortstop and leadoff hitter Peyton Sward taking the first two pitches for strikes against Golden Panthers standout sophomore right-hander McKenzie Minervini. But then Minervini's next two deliveries were wild, with both pitches hitting the top of the backstop on the fly and almost sailing entirely over it.

Minervini was shaking out her arm, prompting Pequannock coach Maryann Goodwin to come into the circle for a conference. Ten minutes later, Minervini departed and went to St. Joseph's University Medical Center in Paterson to have the injured right arm examined by Dr. Tim McInerney.

"She just said she couldn't feel any sensation in her arm at all," said Goodwin. "The game is nice but health is so much more important and that's what we value most when we come out here. We want everyone to be alright. It was very weird, but hopefully everything will be fine with McKenzie."

Hanover Park, one of the top offenses in Morris County averaging 8.86 runs per game and surrendering 4.59 runs per game, broke out with five runs in the top of the first after Minervini's departure.

The Hornets, who had 17 hits, were led by senior first baseman Abby Huang (3 for 4, stolen base, three RBIs), junior Alyza Dooley (2 for 4, two doubles, RBI, one walk), sophomore Gina Lagravenis (2 for 3, 2 RBIs, walk), junior right fielder Ally Huang (3 for 3, two RBIs, a stolen base), Sward (2 for 4, three runs, one RBI, one walk), junior Jenna Vitale (one hit, two runs, one stolen base, one RBI) and pitcher Adriana Carter (2 for 3, 3 runs scored). Junior Olivia Klein came through with two hits and an RBI and junior Molly Cocco had an RBI and a walk.

"Everybody throughout our lineup contributed a great deal. It was a real team effort," said Huang, who will continue her education at the University of Alabama in the fall and major in kiniesiology. "We really have achieved quite a lot on the diamond in our years here."

Hanover Park was the ninth seed in the Morris County Tournament, defeating Boonton, 15-3, in five innings in the first round and losing to eighth-seeded Madison, 12-3, in the MCT second round. Hanover Park earned its first sectional crown in four years when it came back from a 5-2 deficit to trim Bernards, 6-5, in nine innings with three runs in the bottom of the seventh and one in the bottom of the ninth.

"I was very proud of our entire group. We were very young and were consistently solid all year long," said Hanover Park first-year coach Sergio Rodriguez. "We hit well throughout our lineup, Adriana always kept the ball around the plate and was competitive and our defense played quite well overall."

Carter went the distance for Hanover Park, allowing seven hits and three earned runs while striking out two and walking none.

"Adriana has been very reliable all year long," said Rodriguez. "She rarely walks anyone and makes our opponents earn everything they get."

Pequannock was the 10th seed in both the state sectionals and the MCT. In the first round of the county tournament Pequannock defeated Morristown, 12-2, then edged seventh-seeded Whippany Park, 1-0, in the second round before falling to second-seeded Morris Catholic, 13-3, in the MCT quarterfinals.

The Golden Panthers, trailing 9-0, came back with five runs in the bottom of the fourth against Hanover Park to make it 9-5 before the visiting Hornets closed it out with a six-run top of the fifth for the final 10-run margin.

Among the top hitters in the game for the Golden Panthers were senior Christina Banya, who blasted a two-run double to spark the fourth-inning uprising. Also, Lauren Arnold (2 for 3, one run scored), junior catcher Andie Eddeh (hit, RBI), junior Emily Fricker (double, RBI) and junior Adrianna Mulato (two hits, run scored) helped the Golden Panthers get back in the game.

"We accomplished quite a lot this season, especially for a very young team," said Pequannock coach Maryann Goodwin. "We have all of our pitchers and most of our lineup back next season and I'm looking forward another potentially big year ahead."

For Hanover Park, the 2022 season ended on Saturday, June 4 when the Hornets were shut out by Haddon Heights, 4-0, in the Group II final.

Freshman right-hander Sophia Bordi threw a no-hitter for the Garnets, striking out 20 as she aggressively got ahead in the count on almost every Hanover Park batter. Junior shortstop Maddy Clark provided much of the offense for Haddon Heights, blasting a three-run home run over the center field fence in the bottom of the third inning and smashing a two-out solo home run to right-center field in the fifth inning.

Carter allowed five hits in going the distance for the Hornets against the Garnets, striking out two and walking three.