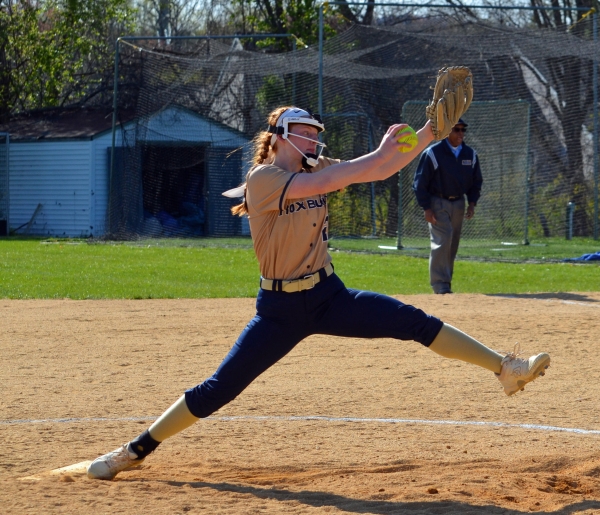 Photos by Sandy Seegers
Rate this item
(2 votes)
Tweet
NEWARK _ It was a reaffirmation of true team-building spirit as well as a morale and confidence-boosting experience, one that will last a lifetime for the Roxbury softball team.
The Gaels, who took a 5-0 lead, were able to hold off a late rally by Steinert and record a 6-4 victoty in the Group III title game on Saturday, June 4 at Seton Hall University's Ivy Hill Park.The championship was the first for Roxbury (24-4) in three decades.
Sophomore right-hander Hailey Errichiello threw a masterful complete-game four-hitter for the Gaels, allowing three earned runs while striking out 15 and walking three. Junior right-hander Isabella Bonacci allowed 10 hits and fanned eight for Steinert.
At the plate, Roxbury was powered by senior Jayden Pennella (3 for 3, two runs, two RBIs, double, walk), junior Kendall Fehsal (2 for 4, two runs, double, stolen base) and two-way threat Errichiello (2 for 3, double, two RBIs).
Senior Maddy Svenningsen blasted a two-run home run to help Roxbury go up in the second inning and added three runs in the third inning to assume a commanding 5-0 lead. But Steinert, sparked by a two-run single from freshman Katie Simonka, and an RBI single from junior Avery Kontura, cut the Gaels' deficit to 5-4 with a four-run uprising in the bottom of the sixth. A Pennella RBI single produced a crucial insurance run in the top of the seventh and Errichiello closed it out with a perfect one-two-three inning in the bottom of the seventh to lift Roxbury to its first Group 3 state championship in thirty years.
Roxbury won the Group IV title in 1992, defeating Middletown North in the championship game. In 1972, the first year the softball state tournament was held after the historic Title IX legislation was signed by President Richard M. Nixon aiding women in education and sports, Roxbury won the North Section championship. The tourney only crowned sectional champions at the time.
In 1973, in the first of three years when softball played down to one state champion, the Gaels won North II and were runners-up to Central champion Phillipsburg in the overall state championship.
By 1976, Groups were divided into I, II, III and IV and Non-Public A and B play began in 1982. Prior to that, parochial schools competed in the four aforementioned groups. The Tournament of Champions began in 2017 with Immaculate Heart Academy taking the initial title.
This season, Steinert, led by junior Paige Schultz (double against Roxbury), Simonka and Bonacci, came within one strike of losing in the Group III Central/South semifinal against Burlington Township. But freshman Gianna DiMeglio blasted a three-run home run in the bottom of the seventh inning to give the Spartans the 4-2 victory that sent them to face Roxbury.
"We knew Steinert was a very, very good team," said Gaels coach Paul Critelli, in his fourth year at the helm with a career 51-23 record. "But we are a very capable team, too, and confident in our abilities. I'm so proud of what we accomplished here for all that Roxbury softball has done throughout the years."
Critelli replaced longtime coach Diane Naugle-Douglas to start the 2019 season.
.
A year ago, Roxbury went 20-7 and finished second in the NJAC-American Division to Sparta and in the Morris County Tournament championship game to Morris Catholic. The loss to the Crusaders was 2-1 after Morris Catholic scored two runs with two outs in the bottom of the seventh inning to rally from a 1-0 deficit.
In the state tournament in 2021 Roxbury won the first of its two straight sectional titles in a row, defeating Passaic Valley, 5-1, in the North 1, Group III championship game before falling to Cranford, 1-0, in the Group III semifinals.
This season, Roxbury took second place in the NJAC-American Division, this time behind Morris Knolls. The Gaels made it to the MCT final for the second straight season before being blanked  by Montville, 5-0.
In the North 1, Group III sectional final this year, Errichiello no-hit Morris Knolls and Roxbury triumphed, 7-0. The Gaels then edged Nutley, 1-0, in 13 innings in a Group III semifinal to advance to earn a berth in the final opposite Steinert.
Errichiello, who has an 0.61 earned run average and 239 strikeouts in 137 innings pitched this season, went the 13-inning distance for the Gaels, surrendering four hits, one earned run, striking out 19 and walking two.
The dramatic 2-1 win over Nutley, which began on June 1, was a marathon in terms of days and innings. The game went six-plus innings before being halted by rain. It was completed the next day and decided by Natalie Otto's RBI double in the bottom of the 13th inning. For Nutley, senior Fallyn Stoeckel also threw all 13 innings, allowing five hits and striking out 14.
"We have been so resilient all year long and we've showed that throughout the state tournament," said Critelli.. "No matter if we are down a run or several runs, we always battle right to the end. All of the phases of our game - pitching and hitting and defense - have really come to the forefront at just the right time."
In the TOC, Roxbury will face the winner of Clayton at Watchung Hills.
Last modified onThursday, 09 June 2022 13:11
More in this category: « Conyack's hit in four-run fifth breaks 3-3 tie Bombers do all their scoring in fourth inning »