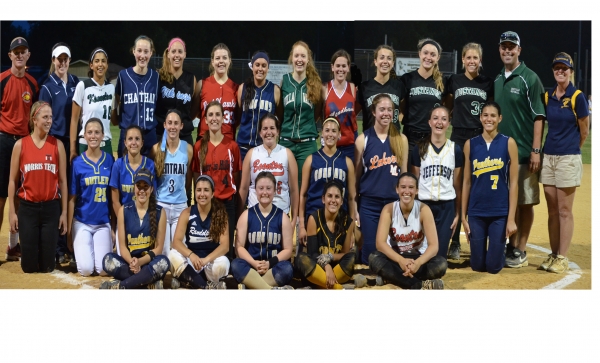 With the exception of throwing two games for the North Jersey Avalanche in a tournament, Brizek was idle. So, the night before the Morris County Senior All-Star Game, Brizek and her dad, Michael, spent Father's Day evening at Green View Park so she'd be sharp for her high school finale.

Brizek didn't appear to be affected by the layoff, pitching effectively over the first five innings for the Gold Team, which edged the Blue Team 4-3 in the showcase held on Monday, June 16 at the Municipal Fields in Montville.

"This was a lot of fun," said Brizek, who will continue her academics and athletics at Ramapo in the fall. "I liked everyone I played with. I didn't really know many of the players but they were very nice and very good. I liked being on a team with Melissa (Tahan) again."

Brizek (5 strikeouts, 3 hits allowed) said it was "pretty sad" to end her high school career and that she was "upset about it" but forward to taking to the field for the Roadrunners.

"Softball is a big part of my life. I've played since I was 6," Brizek said. "I've played with my teammates for a very long time. I can't give softball up. I can't stop now. I've just got to move on and get ready for college."

Butler's Ally Spellman, who will also play at Ramapo, snapped a 3-3 deadlock for the Gold in the bottom of the seventh inning, picking up the decisive RBI when she grounded out. Melissa Jurkiewicz of Jefferson went the last four innings for the Gold and was the winning pitcher. She also scored the decisive run after walking and moving over on a wild pitch and sacrifice bunt.

Many of the players shared Brizek's sentiments - a bit melancholy yet ready to move on.

Morris Tech first baseman Gianna Andreotta, headed to DeSales University, where she will study to be a physician's assistant, is excited for the future.

"I'm thankful I had the opportunity to play in this game," said Andreotta, a resident of Roxbury. "This is a good way to end the season. I'm a little said but looking forward to college. The players in college are all at a high level and very serious about softball, just like the players here tonight."

Andreotta was reunited with Butler players Spellman and Brianne Lipinski, whom she used to play with on a travel team in eighth grade.

Not only were the participants impressed with one another, several of them caught the eye of Pequannock coach Maryann Goodwin, who guided the Gold Team to victory along with Randolph's Brianne McBreen.

"(McCourt) was fast and tremendous in center field," Goodwin said. "(Cox) began calling pitches right away. There was an instance when there was first and third and she called a timeout and told everyone what to do. Of course, all of the girls here tonight are terrific."

Blue gained the early advantage on an error and a run-producing base hit by Tina Ciacciarelli of Roxbury in the first inning. Gold pulled even, 1-1, on Cox's sacrifice fly in the lower half of the fourth.

In the top of the sixth, Blue, coached by Montville's John Immediato and Boonton's Jim Drury, went up, 3-1. Frankie Formisano of Roxbury got things started with a double to right-center field. With one out, Kelly Whritenour of Boonton singled to left field. With two down, Mary Kathryn McCann of Mendham took a first pitch and sent it to left-center field to knock in two runs.

Once again, the Gold came right back, getting two runs aided by a pair of miscues in the bottom of the sixth.

Anna Lee Smith of Boonton was the lone member of the Blue Team to get two hits. Sammi Darling of Roxbury and Jessica Shalongo of Montville handled the pitching duties for Blue. For Gold, Lipinski finished with a pair of hits.

There were several stellar defensive plays. Blue's Raquel Mogavero of Hanover Park made a leaping catch at second base to deprive Spellman of a hit and end the second inning. Montville shortstop Megan Patierno made the second out of the third inning for Blue, diving and recovering to throw to second base. Ciacciarelli then threw out a runner attempting to steal second.