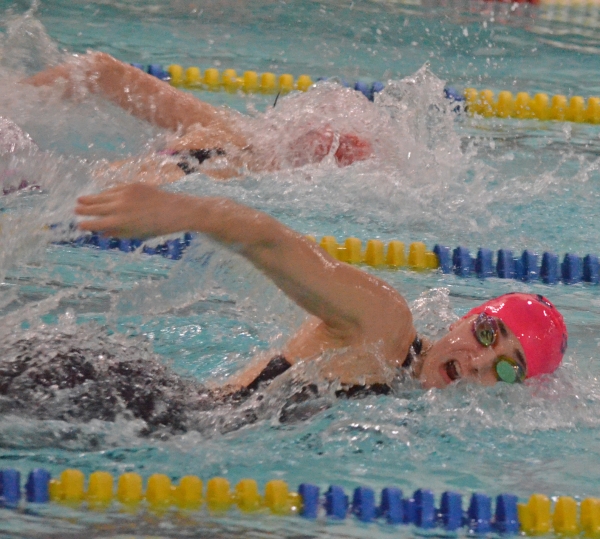 MORRISTOWN _ Emily Gorham remembers being in sixth grade when her older sister, Jess, and Chatham claimed a third consecutive title at the Morris County Swimming Championships.

Gorham sat in the balcony overlooking the pool at Morristown High School, dreaming of the day when she'd compete for the Cougars.

"I couldn't wait to swim for Chatham," said Emily Gorham, now a Chatham senior. "I looked up to my sister and the other swimmers on the team so much."

As it turns out, the younger Gorham, now a senior, has left her own mark on the prolific program. On Saturday, Jan. 28, Emily Gorham took first in two individual events - the 200 and 400 freestyle races - and was part of the gold-medal winning 200-meter medley relay and 400 freestyle relay teams to help the Cougars garner their ninth county crown in a row.

"It's really special," Emily Gorham said. "We were worried about Morristown. This was going to be a big challenge for us, especially because it was a championship-style meet. All of the girls kept saying they were going to throw up. We were nervous but it was good. It got us moving."

Chatham wound up amassing 295.5 points. Morristown ended up with a score of 247.5 and third-place Mendham had 140.

The Cougars opened the meet by triumphing in the 200-meter medley relay with a time of 1:58.98, breaking a record established by Mendham in 2016. Gorham, Jacqueline Crater, Alicia Iizuka and Nicole Tingley comprised the winning foursome. They concluded the meet by prevailing in the 400-meter freestyle relay which featured Gorham, Tingley, Caroline Paulson and Margaret Harrigan.

In between, Chatham received superb performances by Tingley (second in 100 butterfly, third in 200 IM), Crater (second in backstroke) and Iizuka (third in breaststroke). Abbie Bigham also made significant contributions.

"I wanted to do well but I wanted the team to do really well," said Iizuka, headed to Northeastern in the fall. "This is a little bittersweet. Some of us will be leaving."

Tingley, who had a dinner of steak and potatoes on Friday night to prepare for the meet, felt it was "good to keep up the legacy."

"It was different this year," Tingley said. "We didn't have to worry much before. Morristown was a big threat. We still have more ahead. At our last dual meet, our coach told us that the real season starts here."

Mendham senior Mary Laurita was exceptional, nabbing gold in the 50 freestyle and 100 butterfly.

"I'm very happy to end my senior year on a high note," Laurita said. "I was faster than last year. I was a little sentimental today. I was excited to swim for my team."

View the embedded image gallery online at:
https://soar-nj.com/sports/swimming/item/1370-chat#sigProId2ad87b3fa1
More in this category: « Chatham reigns at championships Cougars stretch streak to 10 »