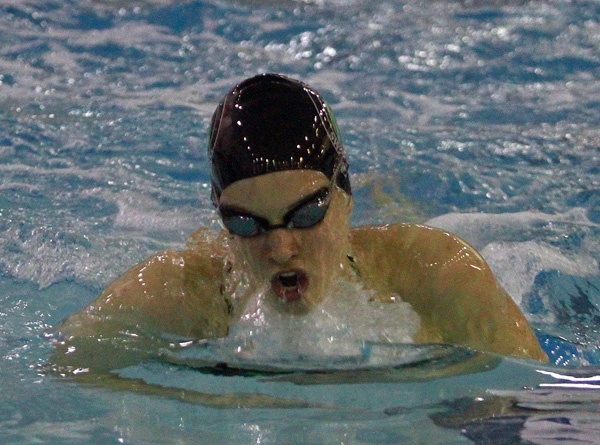 Photos by Karen Fucito Abby Fisher of Kinnelon on her way to winning the 100 breaststroke.
Rate this item
(0 votes)
Tweet

MOUNTAIN LAKES _ Kinnelon's victory over Mountain Lakes in swimming was a monumental one but it also was fleeting.

Before the Colts left the pool area at the Lakeland Hills YMCA on Tuesday, their coach, Brian Boardman, asked his swimmers to put it behind them.

"I'm proud of the team. It's an important win," Boardman said. "I told the girls to be happy and then get over it. We've got counties and states coming up."

The Colts, who took first in nine of 11 events, were ecstatic after defeating the Lakers, 95-75.

Boardman intention wasn't to spoil the celebration or wipe the smiles off his swimmers' faces. He just wanted to ensure they don't get too carried away with their convincing win and lose focus.

Freshman Mackenzie Heffernan certainly was excited. Heffernan was first in the 100 butterfly, second in the 200 individual medley and part of the 200 medley and 400 freestyle relay teams.

She understood the importance of beating the Lakers because of her older sister, Rebecca, now at Drexel University. Last winter, Mountain Lakes came away with a sectional title, ousting Kinnelon.

"This is so good," Heffernan said. "We've been working on this for awhile. We've come so far in the past few years. I'm very happy."

Heffernan, toiling of late to perfect her push off the wall, was pleased with her showing in the meet.

Abby Fisher, Christina Cirillo and Meghan Thompson excelled as well for the Colts, taking the gold in two events apiece.

Senior Candice Barrett, who is not a club swimmer, had much to do with the outcome, finishing third in the 50 and 100 freestyle. Barrett was on the 200 freestyle relay team that was second.

Mountain Lakes' Erin Kiely won the 500 freestyle in 5:24.10. Kiely then teamed up with Emily Zimmerman, Meghan Kiely and Emily Tsang to take the 200 freestyle relay.

"Since I've been coaching (six years), we've never beaten Mountain Lakes," Boardman said. "We got closer and closer with each meet. I thought we had a chance this year more than any other year. Winning today definitely validates our team.

Lakers junior Keavy Gill, of course, didn't want to lose but wasn't upset by falling to what she termed "a great team."

"Kinnelon did a great job and deserved to win," Gill said. "It's sad losing, especially to a team we share the pool with. We have a lot of friends on the team. They were pumped for it. If you lose to someone, it may as well be one like Kinnelon.