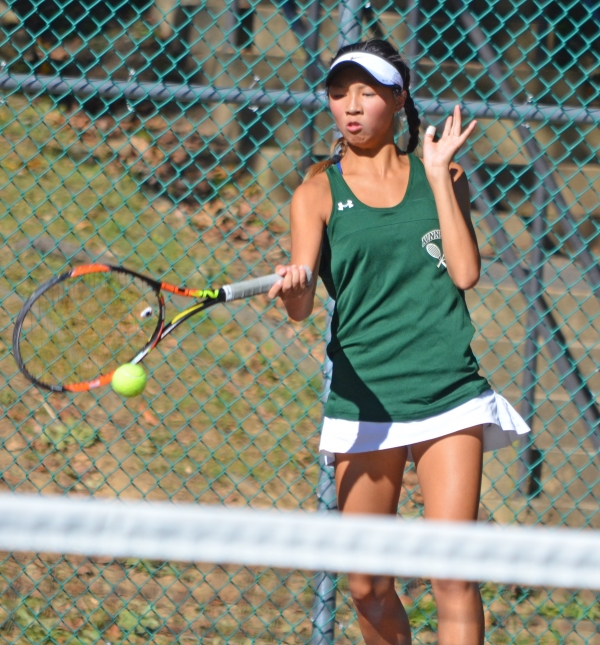 RANDOLPH _ "Get Laud" read one of the posters held up by Britany Lau's cheering section at the Morris County Girls Tennis Tournament.

Lau, a Kinnelon sophomore, complied, pleasing her supporters with a resounding 6-2, 1-6, 7-6 (8-6) upset of three-time defending champion and top-seeded Scarlett Blydenburgh of Chatham in the first singles final on Sunday, Sept. 25 at County College of Morris.

The duo spent nearly two and a half hours on the court, engaging in a match that was hard fought and riddled with twists and turns. Blydenburgh escaped the 2015 title match with a 6-4, 7-6 (6-4) victory.

The tiebreaker and match concluded with Blydenburgh sending a shot into the net then hitting one long. Lau, the second seed, offered no reaction when the ball landed beyond the baseline.

"It felt good to win," Lau said. "It doesn't feel real. I've worked hard throughout the year. I improved my groundstrokes and it paid off. I was pretty calm because I had nothing to lose. It was so close last year. I just had to go out there, give it my best and see how it goes."

Chatham, which prevailed in all four of the other finals, notched its fourth consecutive team crown with a score of 24. Morristown was second with 17 followed by Mendham (15) and Kinnelon (14).

"Four in a row is a great accomplishment," Cougars coach James Cai said. "Everyone played well. I feel bad and I'm sad that Scarlett didn't win her match. She's been such an important player for us."

It appeared Lau would dominate the match and make easy work of Blydenburgh when she raced out to a 5-0 lead in the opening set. The Chatham standout, though, steadied herself and took two of the last three games. Blydenburgh was in charge in the second set, hitting winner after winner.

Lau righted herself and took the first two games of the third set and eventually went up 4-2. Blydenburgh again battled back and grabbed a 6-5 lead. That’s when Lau used her mental toughness and kept pushing.

The third set saw Blydenburgh fall behind, 4-2. Blydenburgh eventually made it 6-5 by holding serve. Next, the relentless Lau, too, held serve, resulting in the tie-breaker.

"I don't mind tie-breakers," Lau said. "They're anyone's game. You switch serves every two so you're not always receiving. It goes back and forth."

She commended Blydenburgh for "being consistent and having a high level of accuracy." Lau also noted that she'd hit the ball deep, counting on a point, but Blydenburgh would respond with "good angle" again and again.

"It was a phenomenal tournament for Britany," Colts coach Jon Cataldi said. "I knew she could do it and she pulled it out. Scarlett played unbelievably well. Britany stayed cool and played her game. I couldn't be prouder. She took it one game at a time and took nothing for granted. She lives, eats and breathes tennis. It's her life."

Blydenburgh, sidelined the first five months of 2016 with a sprained ankle, of course, wanted nothing more than a fourth title yet praised Lau.

"I'm sad and disappointed," Blydenburgh said. "The match was really competitive. Britany hit heavy topspin balls. I should have taken them in the air or as a swing volley. She's an awesome player."

Lau had no big plans after pulling off what many considered a shocker. She intended to sit down to a night of homework. Lau had to study for geometry and Spanish tests and take history notes.

Seden Agar, a Chatham sophomore, made it two in a row at second singles, prevailing 6-4, 7-5 over Morristown's Meghan Acampora, a familiar foe. Agar, as usual, had to adjust to the serves of Acampora, a lefty.

"It was our fourth time playing each other and I knew she'd want to win," Agar said. "I felt a little pressure so I had to stay focused. Breaking her serve was important. As a lefty, Meghan serves wide, especially on the deuce side. I went to the left of the court to be able to get around the ball and get a power shot down the line."

Agar also had to shut out the exuberant Morristown players and fans. "They can be intimidating," she said. "To win is a big thing because they're loud."

Facing a 5-3 deficit in the second set, Agar held serve then broke Acampora to pull even, 5-5. She closed out with an approach shot down the line.

Chatham senior tri-captain Laurel Hickey repeated at third singles, dispatching Morristown's Isabelle Berzins, 6-2, 6-2. It was Hickey's third MCT championship. She was half of a winning first doubles team as a sophomore.

According to Hickey, her serve was on and aided in the victory. However, she felt pressure. Berzins took the initial game of the first set and Hickey cruised through the next three. Berzins pulled within one, 3-2, before Hickey reeled off three more games.

"It helped so much that I served well," Hickey said. "I played my game and didn't let anything going on around me get to me. I had to relax. I took a lot of deep breaths and left it all on the court."

DePasquale, a sophomore, and Vyas, a freshman, were in sync. For DePasquale, who made her exit in the first round last fall, it was another chance.

"I was glad I could redeem myself," DePasquale said. "I feel like we really clicked. If we lost a point, we got over it and pumped ourselves up."

Vyas kept jumping to stave off nerves. DePasquale encouraged her to "bounce it out."

"We didn't want to give up anything. We focused on each point," Vyas said.

Gallop and Morgan relied on strong net play to come out in front. They took charge at the start of each set, establishing 4-0 and 3-0 leads, respectively.

"We've been working so hard," said Morgan, a senior. "Winning was great."

"Getting points at the net was pretty easy for us," said Gallop, a junior. "We just wanted to be consistent."

View the embedded image gallery online at:
https://soar-nj.com/sports/tennis/item/1323-mct-finals#sigProId549792cb06
More in this category: « Elling back in MCT semis Montville is doubly good in MCT »