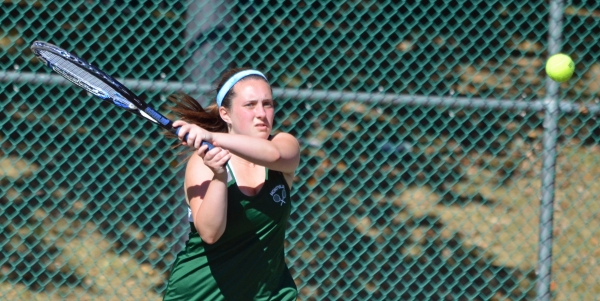 Photos by Maryann Harlow Danielle Langer, above, and Leah Mazie of Montville advanced to the MCT semifinals in first doubles.
Rate this item
(13 votes)
Tweet

RANDOLPH _ Montville's Danielle Langer and Leah Mazie assumed they'd be on the outside of the chain-link fence cheering on their teammates on the second day of the Morris County Girls Tennis Tournament.

Instead, Langer and Mazie, the Mustangs' unseeded first doubles team, will be on the court at County College of Morris battling it out in the semifinals in hopes of gaining a title.

Langer and Mazie, both seniors, buzzed through their preliminary, first round and quarterfinal matches versus Mount Olive, Mendham and Villa Walsh on Saturday, Sept. 23 to advance to the semis.

"I'm excited, really excited," Langer said. "This is my first year on varsity. It was my first time playing here so I was extremely nervous. We played so well together."

Mazie felt that being the underdogs was intimidating. However, once she and Langer "got our rhythm, we began knocking games off."

The highlight of the day for Langer and Mazie was ousting third-seeded Lauren Alpert and Grace Hassel of Mendham, 10-8. Five days earlier, the Mustangs duo was on the losing end, falling to Alpert and Hassel, 2-6, 6-3, 6-7 (5-7).

Langer and Mazie came from behind to pull off the upset, recovering from a 4-1 deficit. They evened the score 4-4 then 5-5 and closed out the match by winning five of the next eight points.

"We had a good chance," Langer said. "We were close in the last match. We know how they play and they knew us. It went back and forth. Out of nowhere, our volleys were great."

Mazie relished getting revenge and said "We were out to beat them. We were ready."

Montville's doubles teams had to be. They went into the tournament unseeded because coach Ken Sachs was unable to attend the seeding meeting. Sachs had to go to back-to-school night when the meeting was held. Only the Mustangs' singles players received seeds.

The doubles teams, therefore, had no choice but to put in top-notch efforts. Montville's second doubles team, comprised of Jane Meng and Gabrielle Weiner, also a landed a berth in the semifinals despite being unseeded. Meng and Weiner stunned top-seeded Catherine Healy and Elana Tognola of Chatham 10-5 in their second match.

"It's really neat," Sachs said. "For them to come in and do what they did is incredible. It's rare. I really thought we'd be going home early and that no one would be playing on Sunday. I have all very nice kids. I've coached 101 teams in many different sports and this one is one of my favorites. They're all so sweet."

It was a highly memorable day for the two Montville seniors. Mazie attended the MCT as an alternate last fall. Langer did not make the trip to either site in Randolph but texted with teammates about what was going on. That's why actually competing was special.

Langer and Mazie have excellent chemistry and work well together.

"I usually set Danielle up," Mazie said. "I hit a deep crosscourt shot and Danielle puts it away. I'm pretty good at passing the net player. I like to hit it down the line."

By their third match, Langer and Mazie were starting to become fatigued. Sachs urged them on.

"Mr. Sachs kept telling us to play through it and move our feet," Langer said. "It was really hot and there's no shade on the court. He told us 'Win and you can go home happy.'"

Simi Rao, a freshman from Mendham, made a stellar debut in the MCT, making it to the semifinals in the second singles bracket.

"I'm excited. I was just hoping for the best," said the 14-year-old Rao. "I didn't think about the outcomes. I gave my all today."

Rao, a strong server with a reliable forehand, began playing tennis three years ago. Her brother, Zachin, who played second singles while at Mendham, was her inspiration. He now plays club tennis at Tulane and conducts clinics.

The younger Rao was a gymnast since the age of 2. She participated in gymnastics seriously for eight years and gave up the sport at 12.

"I was scared about the injuries," Rao said. "I went so long without and injury and wanted a change. I really didn't like it anymore. I lost interest."

Rao pursued tennis with passion. Over the summer, she attended clinics for five hours a day then worked out with her brother for two or three hours. During the season, Rao puts in 12 to 15 hours beyond what she does with the team.

Music is another one of Rao's interests. She plays the flute and the piccolo and was first chair for the flute in middle school. She enjoys painting with watercolors, too.

Rao felt she didn't play well in her MCT matches. She attributed her wins to "consistency."

"The strings are ready to break," she said. "They're not tight enough so I don't have as much topspin. I can't get the ball to go far enough on some shots."

After the first day of play, defending champion Chatham, Kinnelon, Mendham and Mountain Lakes were in a four-way tie. Each team had 13 points.