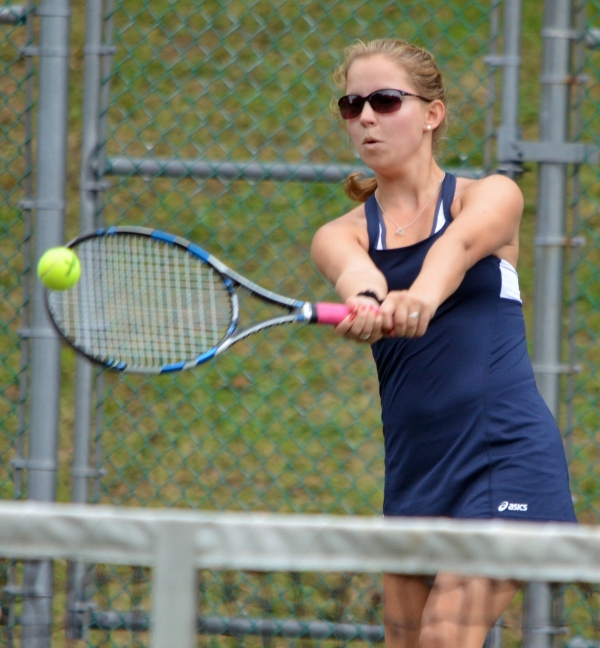 Berkson and Sheldon consider every point, every match, important but had no idea how critical their match was until they prevailed, 7-6 (7-3), 6-0, over Morristown-Beard's Sophia Maney and Emma Duffy and their coach, James Cai, approached them.

The Cougars' sixth consecutive championship, attained on Sunday, Sept. 23 at County College of Morris, was extremely satisfying because it was so hard fought. Berkson and Sheldon, along with second doubles player Libby White, were the only ones from Chatham to advance to the finals. Berkson and Sheldon's triumph allowed the Cougars to edge out second-place Morristown by one point, 17-16.

Kinnelon and Morristown-Beard tied for third with 15 points apiece. Mountain Lakes was next with 14 so it was actually a good thing that Berkson and Sheldon didn't know what was going on with the team scores.

"We came here so nervous," said Berkson, a sophomore. "After warmups, we were confident and got more focused. The first set was difficult. I thought, 'Whoa, what's going on?' during the tie-breaker. I didn't think it would be easy... It was getting frustrating. In the second set, they were wearing out. I couldn't believe it was 6-0."

"It was so close," Sheldon, a senior, noted. "We know that every single point counts. We had to miss as little as possible. One by one, everyone was leaving (the courts). There have been times when we've been the last ones on the court but... We had to power through. We had tunnelvision. It was better if we didn't know if the team was winning or losing. We just kept a positive attitude and played as hard as we could."

Berkson, who has been striving to be more consistent and to improve her mindset, exhibited strong backhand strokes. First serves were Sheldon's forte. The duo was very pleased by their second doubles crown because this is their first season on varsity.

"We play well together," Sheldon said. "We bring each other up. We heard the cheering and kept a positive attitude."

"I can't think of exact words to describe this," Lau said. "I'm very lucky and very excited. I got to represent my school in this tournament for another year. I focused on every point and came to the net often. I put away a lot there. I moved through the court more."

Lau, of course, was in a familiar environment, having played many of her matches at CCM over the last three years. She was delighted for freshman teammate Claire Zhang, who topped Chatham's Libby White, 6-0, 6-0, to finish atop the field at second singles.

"I've played challenge matches with Claire and hit with her," Lau said. "Having her win at second singles is big for our school. She's similar to me - very focused on her game, consistent, fast. Claire is crafty with her hands."

Zhang, introduced to tennis at the age of 7 by a neighbor, planned to be aggressive and "put a little more on my serve." She was anxious at first during the final but quickly settled in.

"It feels really good," Zhang said. "I've never been in a tournament this big."

"What they did is awesome," Cataldi said. "Both of them were on their games for the entire tournament. They are consistent and dedicated and have a passion for the sport. They have great personalities and are leaders on and off the court. Both girls needed mininal coaching. I spoke to each of them once (in the finals). They were calm, cool and collected the entire time."