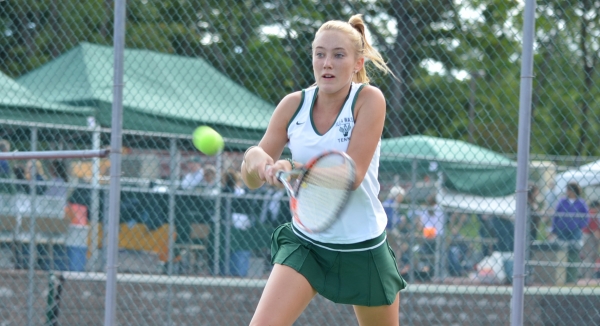 Photos by Maryann Harlow Sam Rollins plays second singles for Villa Walsh. The girls JV soccer team was one of many teams to compete during Septemberfest.
Rate this item
(0 votes)
Tweet

MORRISTOWN _ The "guaranteed win" at first singles was nice but it's no longer a certainty.

With Jamie Campisi now swinging her racket for Lehigh University after a highly successful scholastic career at Villa Walsh, the Vikings have redone their lineup. It may take awhile for them to rejoin the ranks of Morris County's elite but this much can be expected - they'll put up a fight each and every match.

"We're all fighters," said co-captain Katherine Herila, who has taken over Campisi's spot. "We never, ever give up. We keep trying."

Sam Rollins, also a co-captain and the second singles player, mentioned the "guaranteed win," noting that the team misses it. Although the circumstances are different, Rollins believes Villa Walsh will notch its share of victories.

"We've got very strong doubles. There's a lot of chemistry there," Rollins said. "We still hope to go far in the county tournament."

On Saturday, Sept. 14, the Vikings lost, 3-2, to undefeated Kent Place as the campus teemed with people on hand for Septemberfest, the school's celebration of athletics.

That never-say-die attitude was evident, especially at third singles, where Megan Lewis rallied to defeat Elizabeth Cornish, 3-6, 7-6 (7-5), 7-5, and at second doubles, where Isabelle Bezzone and Katie Kelly recorded a 7-5, 7-6 (7-3) win over Bela Parekh and Radhika Siva.

First doubles provided another battle as the Vikings' Alexa Kapuscinski and Katie Mulcahy fell to Ellie Falivene and Nisha Sambamurthy, 7-6 (7-1), 4-6, 6-2.

"I think we have a very good team," first-year coach Alex McDonald said. "A lot of players moved from doubles to singles. It's a different game. They just need to step it up. All of the girls have been improving. Everyone has a good attitude. They play until the last point."

Rollins, of Mendham, moved up from first doubles to second singles - a big leap. She's intent on doing her best and is adjusting to playing singles.

"The mental game was easier at doubles because I had another person to talk to," Rollins said. "I have to cover the whole court now. I'm getting used to that."

Herila, too, was bumped up, going from second singles to first singles. She seems surprised that she's in Campisi's shoes, ones that she deems "very big."

"I can't imagine myself as first singles," Herila said. "As a freshman and sophomore, I was on JV. As a junior, I was varsity second singles. This is all unreal. I'm honored to fill the spot. I admire Jamie a lot. I'm doing my best."

Herila has focused on being more aggressive. Many of the girls she goes up against are well-seasoned, having played first singles for several years. What she does have on her side is consistency. McDonald, the general manager at Minisink Tennis Club, called Herila "a real competitor."

The tennis team enjoyed Septemberfest and the extra support they received. All levels of cross country, soccer, volleyball and tennis were held on school grounds. The focus was on the Class of 2009, whose members were invited to return for the festivities.

"So many people were here," Herila said. "It's such a great day."

Rollins agreed but noted that having so many people around during the match was "a little distracting."

Athletic director Jen Fleury was pleased with the turnout, noting that the event has grown larger each year.

"This is our day to showcase sports," Fleury said. "We have a lot of alumnae come back. More and more join us each time."

There was a festival atmosphere with tents set up and Villa Walsh merchandise being sold. One of the tents was for Villa Captains United, a leadship group that did face painting.

In cross country, West Morris senior Brennan Sharkey raced to her second first-place finish in nine days by clocking a 19:29.87. Sharkey was followed across the finish line by teammates Kylene Cochrane (21:15.81) and Sierra Castaneda (21:17.66).

The Wolfpack and Kent Place were first and second with 72 and 32 points, respectively. Villa Walsh, led by Jackie Endres, was third with 76 points. Endres was seventh. It's the only varsity meet held at Villa Walsh over the course of the season. Middle school meets, however, are hosted by the Vikings on a regular basis.

Kate Murphy had an assist for the Vikings. Lauren Longo ended with six saves for Villa Walsh, which led 2-1 at halftime. Mount St. Dominic's goal came off the foot of Erin Mihalik.