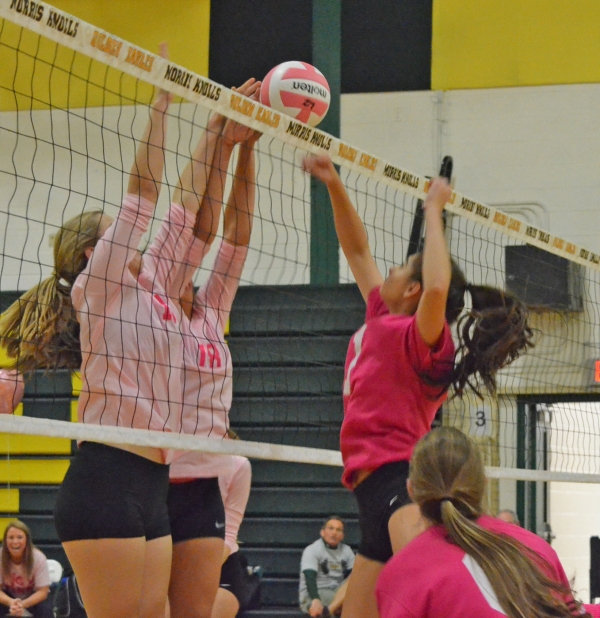 Photos by Maryann Harlow Morris Knolls and Randolph went all out at their Pink Game,
Rate this item
(1 Vote)
Tweet

DENVILLE _ Judy Bongo had her hands full, just as she often did when she served eight years as president of the Morris Knolls Volleyball Booster Club.

This time, Bongo wasn't organizing or overseeing. She was holding a super-size bouquet of pink roses presented to her by the Golden Eagles at the conclusion of their win over Randolph on Monday, Oct. 5.

The flowers were given to Bongo, the mother of Keri, the current freshman coach and a former player, on Dig Pink Night to applaud her for her courage and to support her in her battle against breast cancer.

"It's such a nice tribute," said the elder Bongo. "They invited me to be here and did something special. Everyone's been so caring. It's touched the team, so to speak, and they wanted to do something. It's heartwarming and sweet. It shows that people care."

There has been no shortage of concern for Bongo, who has been recovering after undergoing surgery on Sept. 8, and her family. Keri also has been touched by the gestures of the girls and coaches in the program and many others.

"Everything's been kind of a whirlwind," Keri Bongo said. "It kind of just happened. You never think it'll be your family. I'm still in shock. It's not something you want to talk about or to deal with."

Fortunately, the cancer was Stage 1 when discovered. That fact makes Keri very hopeful that her mother, soon to undergo treatments, will make a full recovery.

"My mom is my hero, the strongest woman I know," Keri said. "I know she'll be OK. It was caught early so I have no doubt she'll beat it."

Judy Bongo's diagnosis came less than a year after her father-in-law, Richard, passed away from pancreatic cancer.

Keri said she is glad that the disease is receiving so much attention, namely through Dig Pink, which aims to raise awareness and funds for breast cancer research.

The Morris Knolls gym was awash in pink. The visiting Rams wore dark pink shirts while the Golden Eagles donned ones with a lighter hue. Pink and white balloons were tied to the railings on the bleachers. Cupcakes and other treats were pink. Prior to the match, which was a 25-19, 25-12 victory for Morris Knolls, the Golden Eagles formed a human ribbon in the stands.

"This is an important month to raise awareness for something that shouldn't be a death sentence," said Morris Knolls first-year coach Jolyn Veres. "It close to home. Someone in our family was diagnosed. I know she will overcome it."

Rams head coach Sebastian DiPietro had taken part in several Dig Pink events in the past. They have special meaning for him, too, because his life has been affected by cancer.

In 2002, DiPietro's father, Roy, learned he had prostate cancer. DiPietro left the University of Delaware, where he was a student, in order to drive his dad to appointments in New York City.

DiPietro, an eighth grade social studies teacher in Roxbury, returned to college after a three-year absence and got his degree. His father, now retired, attends many of Randolph's games.

"I always tell this to the girls - family, school, volleyball," he said. "When my dad got sick, it was a no brainer. I was the oldest son. Family definitely comes first."

"Kaylie is consistent when she hits," Veres said. "Krista just comes out firing. When she swings, she swings. She puts the ball down hard."

The Rams, DiPietro felt, were plagued by loose passing.

"When a team doesn't pass well, nothing can happen," he said. "It's the basis of every play. Everyone loves big swings but if the ball doesn't get there..."

Setters Roma and Olenka Hladky were praised for their scrappy play. Senior outside hitter Jenna Leanza, Randolph's reigning athlete of the week, has played an integral role this fall.